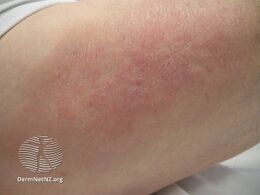 The entire distribution of the nerve is rarely affected. Usually, the unpleasant sensation(s) affect only part of the skin supplied by the nerve. 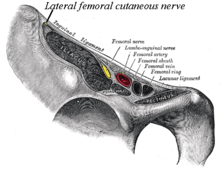 Lateral cutaneous nerve of thigh and other structures passing between the left inguinal ligament and ilium, frontolateral view of the right side of the pelvis.

The lateral femoral cutaneous nerve most often becomes injured by entrapment or compression where it passes between the upper front hip bone (ilium) and the inguinal ligament near the attachment at the anterior superior iliac spine (the upper point of the hip bone). Less commonly, the nerve may be entrapped by other anatomical or abnormal structures, or damaged by diabetic or other neuropathy or trauma such as from seat belt injury in an accident.

The nerve may become painful over a period of time as weight gain makes underwear, belting or the waistband of pants gradually exert higher levels of pressure. Pain may be acute and radiate into the rib cage, and into the groin, thigh, and knee. Alternately, weight loss or aging may remove protective fat layers under the skin, so the nerve can compress against underwear, outer clothing, and—most commonly— by belting. Long periods of standing or leg exercise that increases tension on the inguinal ligament may also cause pressure.

The lateral cutaneous nerve of the thigh can occasionally be damaged during laparoscopic hernia repair, or scarring from the operation can lead to meralgia paraesthetica.[4]

Diagnosis is largely based on patient description and relevant details about recent surgeries, hip injuries, or repetitive activities that could irritate the nerve. Examination checks for sensory differences between the affected leg and the other leg. Accurate diagnosis may require an abdominal and pelvic examination to exclude problems in those areas.

Electromyographic (EMG) nerve-conduction studies may be required. X-rays may be needed to exclude bone abnormalities that might put pressure on the nerve; likewise CT or MRI scans to exclude soft tissue causes such as a tumor.

Treatment varies. In most cases, the best treatment is to remove the cause of compression by modifying patient behavior, in combination with medical treatment to relieve inflammation and pain. Whatever the cause, typical treatment takes several weeks to months—depending on the degree of nerve damage. Typical treatment options include:

For lower pain levels, treatment may involve having the patient:

Pain may take significant time (weeks) to stop and, in some cases, numbness persists despite treatment. In severe cases, the physician might perform a local nerve block at the inguinal ligament, using a combination of local anaesthetic (lidocaine) and corticosteroids to provide relief that may last several weeks.

Pain modifier drugs for neuralgic pain (such as amitriptyline, carbamazepine or gabapentin) may be tried,[6] but are often not as helpful in the majority of patients.[7]

Persistent and severe cases may require surgery to decompress the nerve[7] or, as a last resort, to resect the nerve.[6] The latter treatment leaves permanent numbness in the area.