Xeroderma pigmentosum (XP) is a genetic disorder in which there is a decreased ability to repair DNA damage such as that caused by ultraviolet (UV) light.[1] Symptoms may include a severe sunburn after only a few minutes in the sun, freckling in sun exposed areas, dry skin and changes in skin pigmentation.[1] Nervous system problems, such as hearing loss, poor coordination, loss of intellectual function and seizures, may also occur.[1] Complications include a high risk of skin cancer, with about half having skin cancer by age 10 without preventive efforts, and cataracts.[1] There may be a higher risk of other cancers such as brain cancers.[1]

XP is autosomal recessive, with at least nine specific mutations able to result in the condition.[1][5] Normally, the damage to DNA which occurs in skin cells from exposure to UV light is repaired by nucleotide excision repair.[1] In people with xeroderma pigmentosum, this damage is not repaired.[1] As more abnormalities form in DNA, cells malfunction and eventually become cancerous or die.[1] Diagnosis is typically suspected based on symptoms and confirmed by genetic testing.[4]

There is no cure for XP.[5] Treatment involves completely avoiding the sun.[5] This includes protective clothing, sunscreen and dark sunglasses when out in the sun.[5] Retinoid creams may help decrease the risk of skin cancer.[5] Vitamin D supplementation is generally required.[4] If skin cancer occurs, it is treated in the usual way.[5] The life expectancy of those with the condition is about 30 years less than normal.[6]

The disease affects about 1 in 20,000 in Japan, 1 in 250,000 people in the United States and 1 in 430,000 in Europe.[7] It occurs equally commonly in males and females.[8] Xeroderma pigmentosum was first described in 1870s by Moritz Kaposi.[4][8] In 1882, Kaposi coined the term xeroderma pigmentosum for the condition, referring to its characteristic dry, pigmented skin.[8] Individuals with the disease have been referred to as "children of the night" or "moon children".[9][10]

Signs and symptoms of xeroderma pigmentosum may include:

Xeroderma pigmentosum has an autosomal recessive pattern of inheritance.

One of the most frequent defects in xeroderma pigmentosum is an autosomal recessive genetic defect in which nucleotide excision repair (NER) enzymes are mutated, leading to a reduction in or elimination of NER.[11] If left unchecked, damage caused by ultraviolet light can cause mutations in individual cell's DNA. The causes of the neurological abnormalities are poorly understood and are not connected with exposure to ultraviolet light. The most current theories suggest that oxidative DNA damage is generated during normal metabolism in the central nervous system, and that some types of this damage must be repaired by NER.[12]

Since DNA repair is under genetic control, it can mutate. Many genetic disorders such as xeroderma pigmentosum (XP; MIM 278700) are caused by mutations in genes that repair damaged DNA. XP affects the mechanism that repairs UV damage in skin cell DNA. Those affected with the autosomal recessive disorder XP are extremely sensitive to UV light produced by the sun and develop pigmented spots, tumors, and skin cancer with minimal exposure. Individuals with XP are about 1,000 times more likely to develop skin cancer than individuals without the disorder.

The molecular defects in XP cells result in a greatly elevated induction of mutations in sun-exposed skin of affected individuals. This increased mutation frequency probably accounts for the pigmentation changes and the skin cancers. Examination of mutations in the p53 gene in tumors from XP patients reveal p53 mutations characteristic of UV exposure in the majority of tumors[13] As with all genetic disorders, genetic counseling and psychological support is appropriate for the families to discuss probability of occurrence in future pregnancies, feelings of isolation and concern about career prospects. There is no cure for xeroderma pigmentosum. The most common fate for individuals with XP is early death from cancer.

The XPA protein acts during NER as a scaffold for assembly of other DNA repair proteins at sites of DNA damage to ensure appropriate excision of the damage.[14]

The XPB (ERCC3) protein is employed in unwinding the DNA double helix after DNA damage is initially recognized. Mutations in the XPB(ERCC3) gene can lead to XP or XP combined with Cockayne syndrome.[15]

The XPD (ERCC2) protein, in combination with the XPB helicase-containing transcription/repair complex TFIIH, is employed in unwinding the DNA duplex after damage is initially recognized. Mutations in the XPD(ERCC2) gene cause a variety of syndromes; XP, trichothiodystrophy (TTD), or a combination of XP and Cockayne syndrome (XPCS).[17][18] Both trichothiodystrophy and Cockayne syndrome display features of premature aging, suggesting an association between deficient DNA repair and premature aging (see DNA damage theory of aging).

XPE is a heterodimeric protein composed of two subunits. The larger subunit DDB1 primarily functions as a core component of CUL4A- and CUL4B-based E3 ubiquitin ligase complexes. Substrates that are ubiquitinnated by these complexes include proteins employed in DNA repair.[19]

The XPF (ERCC4) protein together with the ERCC1 protein forms a complex usually designated ERCC1-XPF. This complex separates the DNA helix for a short distance on either side of the site of damage. It then acts as an endonuclease to incise the damaged DNA strand on the 5’ side of the damaged site.[20] Mutant cells with deficient ERCC1-XPF are not only defective in NER, but also in the repair of double-strand breaks and inter-strand crosslinks.

There are seven complementation groups, plus one variant form: 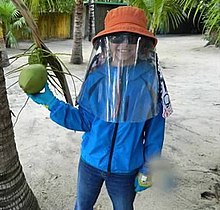 The most obvious, and extremely important part of the treatment, is completely avoiding exposure to sunlight, i.e., total protection from the sun.This includes wearing protective clothing and using sunscreen (physical and chemical).[22] Keratosis can also be treated by using a cryotherapy or fluorouracil.[3] On higher stages of XP disease/disorder, even the light coming through black windows or from fluorescent bulbs is very very much dangerous too.[23]

In the United States of America, the probability of survival of individuals with the disease at age of up to 40 years may amounts as high as 70%, only if those individuals had never came in the contact of sunlight in their life.[25]

In India, many patients with Xeroderma Pigmentosum die at an early age from skin cancers. However, if a person is diagnosed early, does not have severe neurological symptoms, not even as a mild variant, and takes all the precautionary measures to completely avoid any exposure to UV light and/or Sun rays, they may have some possibility to survive till middle age.[26]

The 1968 paper about XP by James Cleaver demonstrated the link between UV-induced DNA damage, faulty DNA repair and cancer.[27]

Because people with XP need to strictly avoid sunlight, but can go outside at night, they have been called children of the dark, children of the night, and vampire children. These terms can be considered derogatory.[28]

XP has been a plot element in several fictional works. One of the common themes in films about XP is whether teens with XP will risk sun exposure in pursuit of a romantic partner.[29]

Movie series like Children of Darkness, a German silent-drama film which was released in two parts in the year of 1921 and 1922 respectively, was among the some of the initial popular movies that was made on XP sickness.

Other movies like a 1964 American drama film named Della, starring Joan Crawford, Paul Burke, Charles Bickford and Diane Baker, directed by Robert Gist, the film originally produced by Four Star Television as a television pilot for a proposed NBC series named Royal Bay, was also based on this skin disease.

The Dark Side of the Sun, a 1988 American-Yugoslavian drama film, was directed by Božidar Nikolić and stars Brad Pitt for his first ever leading role as a young man in search of a cure for a very dreaded skin disease.

A CBS television movie aired in 1994, Children of the Dark, was based on the story of the real-life couple Jim and Kim Harrison, whose two daughters have XP.[30][31]

A 2011 French drama film, named The Moon Child, is based on a 13 year old child, who has this same XP genetic deficiency since birth, which prevents him from exposing himself to daylight.

The 2012 documentary Sun Kissed explores the XP problem on the Navajo Indian Reservation, and links it to the genetic legacy of the Long Walk of the Navajo, when the Navajo people were forced to move to a new location.[32][33][34]

A 2018 romance movie Midnight Sun, based on a 2006 Japanese film, A Song to the Sun, tells the story of a child girl named Katie Price, who has a life-threatening sensitivity towards the sunlight because of the XP disease, and the impact of her sickness that affects her normal life, which at last, claims her life as she accidentally got exposed to sunrise, although, it was just a matter of a second only.