Next set of work

Allow {{VW text|Text=To create a slide that contains this text.}}

Auto upload not working. And the beginning of some images is blurry.[1]

Turn on VideoWiki, even if we do not have the TTS working yet. TTS engine

A zoom out to a zoom in using open street maps of a particular area of the world. Will want to be able to set coordinates and zoom level, ie how far to zoom in. Will also want a way to highlight the object in question.

This will be activated by "code" occurring before an image such as {{VW OpenStreetZoom|coord=x,y|start level=a|end level=b}}

Allow this to be turned on for any given image. With pan in, pan left, pan right, pan up, pan down as options.

This image shows up as broken.

If there are multiple options... Allow people to choose.[2]

Improve the handing of .svg

Here for example the first image is a .svg and does not format correctly. -> Works in the output therefore not key.

This link should go to the "history" tab on MDWiki

Also can we add a link from here to the Youtube video that corresponds? 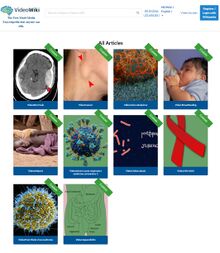 While "Video:" has been removed from in front of the names for EN WP, it is still there for MDWiki. We have 40 articles but only 10 show up here. Can we have the videos so they are searchable? And add a view more button to go through them? Also not sure we need the "Custom" little flag. What other type is there.

Currently it is not able to remove sound from videos... Haven't tested other functionality.

Ability to draw arrows on video

Maybe make it as an improvement to the video cut tool? Would also be nice to have the ability to draw arrows on still images.

Any section that contains <references /> or {{reflist}} is assumed to be called "==References==" and indicates the end of the video. This will allow us to deal with the term "References" being called different things in different languages.

Build a dashboard to capture the extent of usage of VideoWiki. This should include:

Start these videos with a couple of sec animation of our VideoWiki logo with the MDWiki logo. Doc James will try to find someone to build this.

It took me awhile to track down the cause, but finally I discovered that you cannot have identical text in two different headers. If a script has two identical header texts then, while the duplicate header slide (slide "D") plays, the images for all following slides all get played while D is being read -- and all subsequent slides fail to play because their images have already been played. Lambtron talk 19:42, 27 July 2019 (UTC)

To make videos more dynamic and pedagogic, in the vein of NEJM videos [4] and common slideshows, I would like to suggest to add a "partial reveal" functionality, to only reveal parts of an image in a timed fashion, so that several elements of one image can be progressively introduced to the reader. This would be most useful for schemas and such. Technically, I think such a system could be implemented using image maps, but instead of the maps being used to link, they would be used to hide and reveal, potentially using javascript. A simple first draft of such a feature could simply reveal sequentially each image map areas one after the other without regards to a specific time, but then the image map could be extended with a timing optional argument per area to define at what time we want it to be revealed. I think such a feature would tremendously increase the pedagogic value and flexibility of Videowiki, as it is a common need when creating slideshows/video tutorials. --Signimu (talk) 08:20, 2 November 2019 (UTC)

One could also do it with a set of images with each new imagine being the prior image with the extra element revealed. Doc James (talk · contribs · email) 19:00, 24 February 2021 (UTC)

Making VideoWiki Player available on the wiki script page itself instead of an external website.