Vitamin A deficiency (VAD) is a lack of vitamin A.[2] Night blindness is one of the first symptoms.[1] More severe disease may result in dry eyes, corneal ulcers, and blindness.[2] It may also results in an increased risk of severe infections, such as with measles, and follicular hyperkeratosis.[2]

It occurs due to a lack of vitamin A in the diet; which is generally from animal products, fruits or vegetables.[2] Risk factors may include a high rate of infections, including diarrhea, inflammatory bowel disease, and following bariatric surgery.[1][3] There are two dietary forms of vitamin A: retinols and carotenoids.[2] Diagnosis is based on a blood retinol levels of less than 0.7 μmol/L (20 μg/dL), with less than 0.35 μmol/L (10 μg/dL) indicating severe disease.[1]

VAD is common in developing countries, particularly those in Africa and South-East Asia; however, it is rare in developed countries.[1] About 190 million children under five and 19 million pregnant women are estimated to be affected.[2] About 250,000–500,000 children in developing countries become blind each year as a result, making it the leading cause of preventable childhood blindness.[2][1] Among those who become blind, about half die within a year.[2] It is particularly common in the later part of pregnancy, and results in poor outcomes both for the mother and baby.[2][1]

The most common cause of blindness in developing countries is Vitamin A deficiency (VAD). The WHO estimated in 1995 that 13.8 million children had some degree of visual loss related to VAD.[5] Night blindness and its worsened condition, xerophthalmia, are markers of Vitamin A deficiency (VAD), collections of keratin in the conjunctiva, known as Bitot's spots, and ulceration and necrosis of cornea keratomalacia can be seen. Nyctalopia is the earliest ocular sign of VAD. Conjunctival epithelial defects occur around lateral aspect of the limbus in the subclinical stage of VAD. These conjunctival epithelial defects are not visible on a biomicroscope, but they take up black stain and become readily visible after instillation of kajal (surma); this is called "Imtiaz's sign".[6]

VAD can also lead to impaired immune function, cancer, and birth defects. Vitamin A deficiency is one of several hypovitaminoses implicated in follicular hyperkeratosis.

Night blindness is the difficulty for the eyes to adjust to dim light. Affected individuals have poor vision in the darkness but see normally when adequate light is present.

A process called dark adaptation typically causes an increase in photopigment amounts in response to low levels of illumination. This occurs to an enormous magnitude, increasing light sensitivity by up to 100,000 times its sensitivity in normal daylight conditions. VAD affects vision by inhibiting the production of rhodopsin, the photopigment responsible for sensing low-light situations. Rhodopsin is found in the retina and is composed of retinal (an active form of vitamin A) and opsin (a protein). When VAD prevents the body from producing sufficient amounts of retinal, a decreased amount of rhodopsin is produced and night blindness results.

Night blindness caused by VAD has been associated with the loss of goblet cells in the conjunctiva, a membrane covering the outer surface of the eye. Goblet cells are responsible for secretion of mucus, and their absence results in xerophthalmia, a condition where the eyes fail to produce tears. Dead epithelial and microbial cells accumulate on the conjunctiva and form debris that can lead to infection and possibly blindness.[7]

Decreasing night blindness requires the improvement of vitamin A status in at-risk populations. Supplements and fortification of food have been shown to be effective interventions. Supplement treatment for night blindness includes massive doses of vitamin A (200,000 IU) in the form of retinyl palmitate to be taken by mouth, which is administered two to four times a year.[8] Intramuscular injections are poorly absorbed and are ineffective in delivering sufficient bioavailable vitamin A. Fortification of food with vitamin A is costly, but can be done in wheat, sugar, and milk.[9] Households may circumvent expensive fortified food by altering dietary habits. Consumption of yellow-orange fruits and vegetables rich in carotenoids, specifically beta-carotene, provides provitamin A precursors that can prevent VAD-related night blindness. However, the conversion of carotene to retinol varies from person to person and bioavailability of carotene in food varies.[10][11] 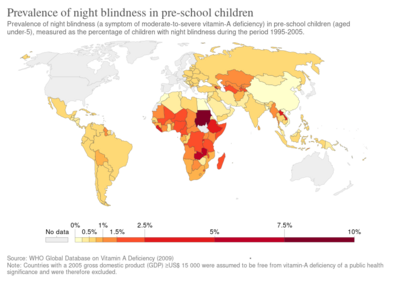 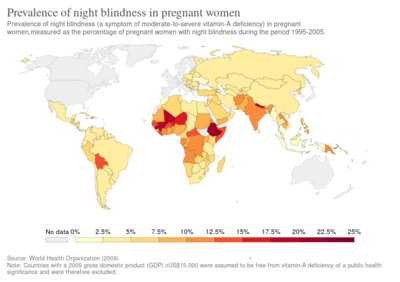 Along with poor diet, infection and disease are common in many developing communities.[2] Infection depletes vitamin A reserves which in turn make the affected individual more susceptible to further infection.[2] Increased incidence of xerophthalmia has been observed after an outbreak of measles, with mortality correlated with severity of eye disease.[2] In longitudinal studies of preschool children, susceptibility to disease increased substantially when severe VAD was present.[2]

The reason for the increased infection rate in vitamin A deficient individuals is that T-killer cells require the retinol metabolite retinoic acid to proliferate correctly.[2] Retinoic acid is a ligand for nuclear retinoic acid receptors that bind the promoter regions of specific genes,[12] thus activating transcription and stimulating T cell replication.[2] Vitamin A deficiency will often entail deficient retinol intake, resulting in a reduced number of T-cells and lymphocytes, leading to an inadequate immune response and consequently a greater susceptibility to infections.[2] In the presence of dietary deficiency of vitamin A, VAD and infections reciprocally aggravate each other.[2]

In addition to dietary problems, other causes of VAD are known. Iron deficiency can affect vitamin A uptake; other causes include fibrosis, pancreatic insufficiency, inflammatory bowel disease, and small-bowel bypass surgery.[13] Protein energy malnutrition is often seen in VAD; suppressed synthesis of retinol binding protein (RBP) due to protein deficiency leads to reduced retinol uptake.[14] Excess alcohol consumption can deplete vitamin A, and a stressed liver may be more susceptible to vitamin A toxicity. People who consume large amounts of alcohol should seek medical advice before taking vitamin A supplements. In general, people should also seek medical advice before taking vitamin A supplements if they have any condition associated with fat malabsorption such as pancreatitis, cystic fibrosis, tropical sprue, and biliary obstruction. Other causes of vitamin A deficiency are inadequate intake, fat malabsorption, or liver disorders. Deficiency impairs immunity and hematopoiesis and causes rashes and typical ocular effects (e.g., xerophthalmia, night blindness).[15]

Initial assessment may be made based on clinical signs of VAD.[16] Conjunctival impression cytology can be used to assess the presence of xerophthalmia which is strongly correlated with VAD status (and can be used to monitor recovery progress).[16][17] Several methods of assessing bodily vitamin A levels are available, with HPLC the most reliable.[17] Measurement of plasma retinol levels is a common laboratory assay used to diagnose VAD. Other biochemical assessments include measuring plasma retinyl ester levels, plasma and urinary retonioic acid levels, and vitamin A in breast milk.[16]

a) Cornea with temporal perforation, opacified stroma b) after vitamin A therapy.

Treatment of VAD can be undertaken with both oral vitamin A and injectable forms, generally as vitamin A palmitate.

Researchers at the U. S. Agricultural Research Service have been able to identify genetic sequences in corn that are associated with higher levels of beta-carotene, the precursor to vitamin A. They found that breeders can cross certain variations of corn to produce a crop with an 18-fold increase in beta-carotene. Such advancements in nutritional plant breeding could one day aid in the illnesses related to VAD in developing countries.[29]

Global efforts to support national governments in addressing VAD are led by the Global Alliance for Vitamin A (GAVA), which is an informal partnership between Nutrition International, Helen Keller International, UNICEF, WHO, and CDC. About 75% of the vitamin A required for supplementation of preschool-aged children in low- and middle-income countries is supplied through a partnership between Nutrition International and UNICEF, with support from Global Affairs Canada.[30] An estimated 1.25 million deaths due to vitamin A deficiency have been averted in 40 countries since 1998.[30] In 2013, the prevalence of vitamin A deficiency was 29% in low-income and middle-income countries, remaining highest in sub-Saharan Africa and South Asia.[31] A 2017 review found that vitamin A supplementation in children 5 years old and younger in 70 countries was associated with a 12% reduction in mortality rate.[32][needs update] The review reported that synthetic vitamin A supplementation may not be the best long‐term solution for vitamin A deficiency, but rather food fortification, improved food distribution programs, and crop improvement, such as for fortified rice or vitamin A-rich sweet potato, may be more effective in eradicating vitamin A deficiency.[32]