Ventricular septal defect (VSD) is a birth defect of the heart in which there is a hole in the wall between the ventricles, the lower two chambers of the heart.[1] Symptoms in babies may vary from none to shortness of breath, poor feeding, and excessive sweating.[2] Complications may include pulmonary hypertension, arrhythmias, endocarditis, or heart failure.[2]

The cause is usually unknown.[1] Risk factors include certain infections during pregnancy such as influenza and rubella, use of alcohol or cocaine during pregnancy, and the genetic condition Holt-Oram syndrome.[2] While they generally occur as an isolated defect, they may also occur in associate with other birth defects of the heart such as Tetralogy of Fallot and transposition of the great arteries.[2] The diagnosis may be suspected based on a heart murmur and confirmed by ultrasound of the heart.[1]

Up to 90% of VSDs spontaneously close in the first year of life.[2] It the VSD is larger or results in symptoms surgery may be carried out.[2] Outcomes with surgery are generally good.[2] VSDs affects about 3 per 1,000 newborns.[2] It represents about 37% of birth defects of the heart in children.[2] The condition was first described in 1847 by Dalrymple.[2]

Ventricular septal defect is usually symptomless at birth. It usually manifests a few weeks after birth.

VSD is an acyanotic congenital heart defect, aka a left-to-right shunt, so there are no signs of cyanosis in the early stage. However, uncorrected VSD can increase pulmonary resistance leading to the reversal of the shunt and corresponding cyanosis.

The restrictive ventricular septal defects (smaller defects) are associated with a louder murmur and more palpable thrill (grade IV murmur). Larger defects may eventually be associated with pulmonary hypertension due to the increased blood flow. Over time this may lead to an Eisenmenger's syndrome the original VSD operating with a left-to-right shunt, now becomes a right-to-left shunt because of the increased pressures in the pulmonary vascular bed.

Congenital VSDs are frequently associated with other congenital conditions, such as Down syndrome.[4]

A VSD can also form a few days after a myocardial infarction[5] (heart attack) due to mechanical tearing of the septal wall, before scar tissue forms, when macrophages start remodeling the dead heart tissue.

The causes of congenital VSD (ventricular septal defect) include the incomplete looping of the heart during days 24-28 of development. Faults with NKX2.5 gene are usually associated with isolated (non syndromic) ASD in humans when one copy is missing.

In serious cases, the pulmonary arterial pressure can reach levels that equal the systemic pressure. This reverses the left to right shunt, so that blood then flows from the right ventricle into the left ventricle, resulting in cyanosis, as blood is by-passing the lungs for oxygenation.[6]

This effect is more noticeable in patients with larger defects, who may present with breathlessness, poor feeding and failure to thrive in infancy. Patients with smaller defects may be asymptomatic. Four different septal defects exist, with perimembranous most common, outlet, atrioventricular, and muscular less commonly.[7] 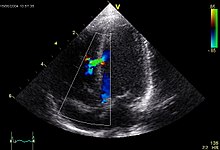 Echocardiographic image of a moderate ventricular septal defect in the mid-muscular part of the septum. The trace in the lower left shows the flow during one complete cardiac cycle and the red mark the time in the cardiac cycle that the image was captured. Colours are used to represent the velocity of the blood. Flow is from the left ventricle (right on image) to the right ventricle (left on image). The size and position is typical for a VSD in the newborn period.

A VSD can be detected by cardiac auscultation. Classically, a VSD causes a pathognomonic holo- or pansystolic murmur. Auscultation is generally considered sufficient for detecting a significant VSD. The murmur depends on the abnormal flow of blood from the left ventricle, through the VSD, to the right ventricle. If there is not much difference in pressure between the left and right ventricles, then the flow of blood through the VSD will not be very great and the VSD may be silent. This situation occurs a) in the fetus (when the right and left ventricular pressures are essentially equal), b) for a short time after birth (before the right ventricular pressure has decreased), and c) as a late complication of unrepaired VSD. Confirmation of cardiac auscultation can be obtained by non-invasive cardiac ultrasound (echocardiography). To more accurately measure ventricular pressures, cardiac catheterization, can be performed.

A nitinol device for closing muscular VSDs, 4 mm diameter in the centre. It is shown mounted on the catheter into which it will be withdrawn during insertion.

Most cases do not need treatment and heal during the first years of life. Treatment is either conservative or surgical. Smaller congenital VSDs often close on their own, as the heart grows, and in such cases may be treated conservatively. Some cases may necessitate surgical intervention, i.e. with the following indications:

1. Failure of congestive cardiac failure to respond to medications

For the surgical procedure, a heart-lung machine is required and a median sternotomy is performed. Percutaneous endovascular procedures are less invasive and can be done on a beating heart, but are only suitable for certain patients. Repair of most VSDs is complicated by the fact that the conducting system of the heart is in the immediate vicinity.

A device, known as the Amplatzer muscular VSD occluder, may be used to close certain VSDs.[9] It was initially approved in 2009.[9] It appears to work well and be safe.[9] The cost is also lower than having open heart surgery.[9] The device is placed through a small incision in the groin.[10]

The Amplatzer septal occluder was shown to have full closure of the ventricular defect within the 24 hours of placement.[11] It has a low risk of embolism after implantation.[12] Some tricuspid valve regurgitation was shown after the procedure that could possibly be due from the right ventricular disc.[11] There have been some reports that the Amplatzer septal occluder may cause life-threatening erosion of the tissue inside the heart.[13] This occurs in one percent of people implanted with the device and requires immediate open-heart surgery.[13] This erosion occurs due to improper sizing of the device resulting with it being too large for the defect, causing rubbing of the septal tissue and erosion.[13]

a) Surgical closure of a Perimembranous VSD is performed on cardiopulmonary bypass with ischemic arrest. Patients are usually cooled to 28 degrees. Percutaneous Device closure of these defects is rarely performed in the United States because of the reported incidence of both early and late onset complete heart block after device closure, presumably secondary to device trauma to the AV node.

b) Surgical exposure is achieved through the right atrium. The tricuspid valve septal leaflet is retracted or incised to expose the defect margins.

e) Critical attention is necessary to avoid injury to the conduction system located on the left ventricular side of the interventricular septum near the papillary muscle of the conus.

f) Care is taken to avoid injury to the aortic valve with sutures.

g) Once the repair is complete, the heart is extensively deaired by venting blood through the aortic cardioplegia site, and by infusing Carbon Dioxide into the operative field to displace air.

h) Intraoperative transesophageal echocardiography is used to confirm secure closure of the VSD, normal function of the aortic and tricuspid valves, good ventricular function, and the elimination of all air from the left side of the heart.

i) The sternum, fascia and skin are closed, with potential placement of a local anesthetic infusion catheter under the fascia, to enhance postoperative pain control.

j) Multiple muscular VSDs are a challenge to close, achieving a complete closure can be aided by the use of fluorescein dye.[14]

VSDs are the most common congenital cardiac abnormalities. They are found in 30-60% of all newborns with a congenital heart defect, or about 2-6 per 1000 births. During heart formation, when the heart begins life as a hollow tube, it begins to partition, forming septa. If this does not occur properly it can lead to an opening being left within the ventricular septum. It is debatable whether all those defects are true heart defects, or if some of them are normal phenomena, since most of the trabecular VSDs close spontaneously.[15] Prospective studies give a prevalence of 2-5 per 100 births of trabecular VSDs that close shortly after birth in 80-90% of the cases.[16][17]