From WikiProjectMed
Jump to navigation Jump to search
Not to be confused with Creutzfeldt–Jakob disease.

Variant Creutzfeldt–Jakob disease (vCJD) is a type of brain disease within the transmissible spongiform encephalopathy family.[5] Symptoms include psychiatric problems, behavioral changes, and painful sensations.[1] The length of time between exposure and the development of symptoms is unclear, but is believed to be years.[2] Average life expectancy following the onset of symptoms is 13 months.[1]

It is caused by prions, which are mis-folded proteins.[6] Spread is believed to be primarily due to eating bovine spongiform encephalopathy (BSE)-infected beef.[5][6] Infection is also believed to require a specific genetic susceptibility.[3][5] Spread may potentially also occur via blood products or contaminated surgical equipment.[7] Diagnosis is by brain biopsy but can be suspected based on certain other criteria.[2] It is different from classic Creutzfeldt–Jakob disease, though both are due to prions.[6]

Treatment for vCJD involves supportive care.[4] As of 2012 about 170 cases of vCJD have been recorded in the United Kingdom and 50 cases in the rest of the world.[5] The disease has become less common since 2000.[5] The typical age of onset is less than 30 years old.[2] It was first identified in 1996 by the National CJD Surveillance Unit in Edinburgh, Scotland.[5]

Symptoms include psychiatric problems, behavioral changes, and painful sensations.[1] The length of time between exposure and the development of symptoms is unclear, but is believed to be years.[2] Average life expectancy following the onset of symptoms is 13 months.[1]

In the UK, the primary cause of vCJD has been eating beef tainted with bovine spongiform encephalopathy.[8] A 2012 study by the Health Protection Agency showed that around 1 in 2,000 people in the UK shows signs of abnormal prion accumulation.[9]

Bovine spongiform encephalopathy occurred due to feeding meat and bone meal to cattle (as a source of protein) caused what was previously an animal pathogen to enter into the human food chain, and from there to begin causing humans to contract vCJD.[10]

In 2004, a report showed that vCJD can be transmitted by blood transfusions.[11] The finding alarmed healthcare officials because a large epidemic of the disease could result in the near future. A blood test for vCJD infection is possible[12] but is not yet available for screening blood donations. Significant restrictions exist to protect the blood supply. The UK government banned anyone who had received a blood transfusion since January 1980 from donating blood.[13] Since 1999 there has been a ban in the UK for using UK blood to manufacture fractional products such as albumin.[14] Whilst these restrictions may go some way to preventing a self-sustaining epidemic of secondary infections the number of infected blood donations is unknown and could be considerable. In June 2013 the government was warned that deaths—then at 176—could rise five-fold through blood transfusions.[15]

On May 28, 2002, the United States Food and Drug Administration instituted a policy that excludes from donation anyone having spent at least six months in certain European countries (or three months in the United Kingdom) from 1980 to 1996. Given the large number of U.S. military personnel and their dependents residing in Europe, it was expected that over 7% of donors would be deferred due to the policy. Later changes to this policy have relaxed the restriction to a cumulative total of five years or more of civilian travel in European countries (six months or more if military). The three-month restriction on travel to the UK, however, has not been changed.[16]

In New Zealand, the New Zealand Blood Service (NZBS) in 2000 introduced measures to preclude permanently donors having resided in the United Kingdom (including the Isle of Man and the Channel Islands) for a total of six months or more between January 1980 and December 1996. The measure resulted in ten percent of New Zealand's active blood donors at the time becoming ineligible to donate blood. In 2003, the NZBS further extended restrictions to permanently preclude donors having received a blood transfusion in the United Kingdom since January 1980, and in April 2006, restrictions were further extended to include the Republic of Ireland and France.[17]

Similar regulations are in place where anyone having spent more than six months for Germany or one year for France living in the UK between January 1980 and December 1996 is permanently banned from donating blood.[18][19]

In Poland, anyone having spent cumulatively six months or longer between 1 January 1980 and 31 December 1996 in the UK, Ireland, or France is permanently barred from donating.[22]

In the Czech Republic, anyone having spent more than six months in the UK or France between the years 1980 and 1996 or received transfusion in the UK after the year 1980 is not allowed to donate blood.[23]

In Finland, anyone having lived or stayed in the British Isles a total of over six months between 1 January 1980 and 31 December 1996 is permanently barred from donating.[24]

In the U.S., the FDA has banned import of any donor sperm, motivated by a risk of variant Creutzfeldt-Jakob disease, inhibiting the once popular[25] import of Scandinavian sperm. Despite this, the scientific consensus is that the risk is negligible, as there is no evidence Creutzfeldt–Jakob is sexually transmitted.[26][27][28]

Other types of brains

Eating other types of brains such as those from squirrels is not recommended due to potential concerns.[29]

Despite the consumption of contaminated beef in the UK being high, vCJD has infected a small number of people. One explanation for this can be found in the genetics of people with the disease. The human PRNP protein which is subverted in prion disease can occur with either methionine or valine at amino acid 129, without any apparent difference in normal function. Of the overall Caucasian population, about 40% have two methionine-containing alleles, 10% have two valine-containing alleles, and the other 50% are heterozygous at this position. Only a single person with vCJD tested was found to be heterozygous; most of those affected had two copies of the methionine-containing form. It is not yet known whether those unaffected are actually immune or only have a longer incubation period until symptoms appear.[30][31] 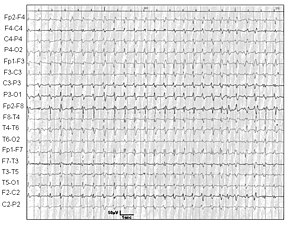 Examination of brain tissue is required to confirm a diagnosis of variant CJD.[32] The following confirmatory features should be present:[32]

vCJD is a separate condition from classic Creutzfeldt–Jakob disease (though both are caused by PrP prions).[6] Both classic and variant CJD are subtypes of Creutzfeld–Jakob disease. There are three main categories of CJD disease: sporadic CJD, hereditary CJD, and acquired CJD, with variant CJD being in the acquired group along with iatrogenic CJD.[33][34] The classic form includes sporadic and hereditary forms.[35] Sporadic CJD is the most common type.[36]

ICD-10 has no separate code for vCJD and such cases are reported under the Creutzfeldt–Jakob disease code (A81.0).[37]

The Lancet in 2006 suggested that it may take more than 50 years for vCJD to develop, from their studies of kuru, a similar disease in Papua New Guinea.[38] The reasoning behind the claim is that kuru was possibly transmitted through cannibalism in Papua New Guinea when family members would eat the body of a dead relative as a sign of mourning. In the 1950s, cannibalism was banned in Papua New Guinea.[39] In the late 20th century, however, kuru reached epidemic proportions in certain Papua New Guinean communities, therefore suggesting that vCJD may also have a similar incubation period of 20 to 50 years. A critique to this theory is that while mortuary cannibalism was banned in Papua New Guinea in the 1950s, that does not necessarily mean that the practice ended. Fifteen years later Jared Diamond was informed by Papuans that the practice continued.[39] Kuru may have passed to the Fore people through the preparation of the dead body for burial.

These researchers noticed a genetic variation in some people with kuru that has been known to promote long incubation periods. They have also proposed that individuals having contracted CJD in the early 1990s represent a distinct genetic subpopulation, with unusually short incubation periods for bovine spongiform encephalopathy (BSE). This means that there may be many more people with vCJD with longer incubation periods, which may surface many years later.[38]

Prion protein is detectable in lymphoid and appendix tissue up to two years before the onset of neurological symptoms in vCJD. Large scale studies in the UK have yielded an estimated prevalence of 493 per million, higher than the actual number of reported cases. This finding indicates a large number of asymptomatic cases and the need to monitor.[40]

In 1997, a number of people from Kentucky developed vCJD. It was discovered that all had consumed squirrel brains, although a coincidental relationship between the disease and this dietary practice may have been involved.[41] In 2008, UK scientists expressed concern over the possibility of a second wave of human cases due to the wide exposure and long incubation of some cases of vCJD.[42] In 2015, a man from New York developed vCJD after eating squirrel brains. From November 2017 to April 2018, four suspected cases of the disease arose in Rochester.[43] 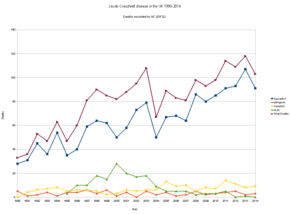 Deaths in the UK from Creutzfeldt–Jakob disease 1990–2014: while cases of vCJD have declined (green), reported cases of sporadic CJD continue to increase (blue)

Researchers believe one in 2,000 people in the UK is a carrier of the disease linked to eating contaminated beef (vCJD).[44] The survey provides the most robust prevalence measure to date—and identifies abnormal prion protein across a wider age group than found previously and in all genotypes, indicating "infection" may be relatively common. This new study examined over 32,000 anonymous appendix samples. Of these, 16 samples were positive for abnormal prion protein, indicating an overall prevalence of 493 per million population, or one in 2,000 people are likely to be carriers. No difference was seen in different birth cohorts (1941–1960 and 1961–1985), in both sexes, and there was no apparent difference in abnormal prion prevalence in three broad geographical areas. Genetic testing of the 16 positive samples revealed a higher proportion of valine homozygous (VV) genotype on the codon 129 of the gene encoding the prion protein (PRNP) compared with the general UK population. This also differs from the 176 people with vCJD, all of whom to date have been methionine homozygous (MM) genotype. The concern is that individuals with this VV genotype may be susceptible to developing the condition over longer incubation periods.[45]

In 2000 a voluntary support group was formed by families who had lost someone to vCJD. The goal was to support other families going through a similar experience. This support was provided through a National Helpline, a Carer's Guide, a website and a network of family befriending. The support groups had an internet presence at the turn of the 21st century. The driving force behind the foundation was Lester Firkins, who lost his own young son to the disease.[46][47]

In October 2000 the report of the government inquiry into BSE chaired by Lord Phillips was published.[48] The BSE report criticised former Conservative Party Agriculture Ministers John Gummer, John MacGregor and Douglas Hogg.[49] The report concluded that the escalation of BSE into a crisis was the result of intensive farming, particularly with herbivore cows being fed with cow and sheep remains. Furthermore, the report was critical of the way the crisis had been handled.[50] There was a reluctance to consider the possibility that BSE could cross the species barrier was proving increasingly uncertain. The government assured the public that British beef was safe to eat, with agriculture minister John Gummer famously feeding his daughter a beefburger. The British government were reactive more than proactive in response; the worldwide ban on all British beef exports in March 1996 was a serious economic blow.[51]

The foundation had been calling for compensation to include a care package to help relatives look after those with vCJD. There have been widespread complaints of inadequate health and social services support.[52] Following the Phillips Report in October 2001, the government announced a compensation scheme for British people affected with vCJD. The multi-million-pound financial package was overseen by the vCJD Trust.

A memorial plaque for persons who have died due to vCJD was installed in central London.[when?] It is located on the boundary wall of St Thomas' Hospital in Lambeth facing the Riverside Walk of Albert Embankment.[53]