Tranexamic acid (TXA) is a medication used to treat or prevent excessive blood loss from major trauma, postpartum bleeding, surgery, tooth removal, nosebleeds, and heavy menstruation.[1][2] It is also used for hereditary angioedema.[1][4] It is taken either by mouth or injection into a vein.[1]

Side effects are rare.[4] Some include changes in color vision, blood clots, and allergic reactions.[4] Greater caution is recommended in people with kidney disease.[5] Tranexamic acid appears to be safe for use during pregnancy and breastfeeding.[4][6] Tranexamic acid is in the antifibrinolytic family of medications.[5]

Tranexamic acid was first made in 1962 by Japanese researchers Shosuke and Utako Okamoto.[7] It is on the World Health Organization's List of Essential Medicines.[8] Tranexamic acid is available as a generic medication[9] The wholesale cost in the developing world is about 4.38 to US$4.89 for a course of treatment.[10] In the United States, a course of treatment costs between 100 and US$200.[9] 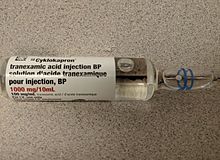 A one gram vial of TXA

Tranexamic acid is frequently used following major trauma.[11] Tranexamic acid is used to prevent and treat blood loss in a variety of situations, such as dental procedures for hemophiliacs, heavy menstrual bleeding, and surgeries with high risk of blood loss.[12][13]

Tranexamic acid has been found to decrease the risk of death in people who have significant bleeding due to trauma.[14][15] Its main benefit is if taken within the first three hours.[16] It has been shown to reduce death due to any cause and death due to bleeding.[17] Further studies are assessing the effect of tranexamic acid in isolated brain injury.[18] Given within three hours of a head injury it also decreases the risk of death.[19]

Tranexamic acid is used after delivery to reduce bleeding, often with oxytocin.[23] Death due to postpartum bleeding was reduced in women receiving tranexamic acid.[2]

In the United States, tranexamic acid is FDA approved for short-term use in people with severe bleeding disorders who are about to have dental surgery.[29] Tranexamic acid is used for a short period of time before and after the surgery to prevent major blood loss and decrease the need for blood transfusions.[30]

Tranexamic acid is used in dentistry in the form of a 5% mouth rinse after extractions or surgery in patients with prolonged bleeding time; e.g., from acquired or inherited disorders.[31]

The use of tranexamic acid, applied directly to the area that is bleeding or taken by mouth, appears useful to treat nose bleeding compared to packing the nose with cotton pledgets alone.[34][35][36] It decreases the risk of rebleeding within 10 days.[37]

The defined daily dose is 2 grams by mouth or by injection.[3] The typical dose for heavy menstrual periods is 1 gram by mouth three times per day for three to five days.[45] For bleeding after childbirth 1 gram is given by intravenous over 15 min which may be repeated after 30 min if not effective.[46] The intravenous dose in those under the age of 15 is 15 mg/kg.[46]

Side effects are rare.[4] Some reported side effects include changes in color vision, blood clots, and allergic reactions such as anaphylaxis.[4] Whether the risk of venous thromboembolism (blood clots) is actually increased is a matter of debate. The risk is mentioned in the product literature,[20] and they were reported in post marketing experience.[20] Despite this, and the inhibitory effect of tranexamic acid on blood clot breakdown, large studies of the use of tranexamic acid have not shown an increase in the risk of venous or arterial thrombosis,[47][48] even in people who had previously experienced thrombosis under other circumstances.[48]

Tranexamic acid is a synthetic analog of the amino acid lysine. It serves as an antifibrinolytic by reversibly binding four to five lysine receptor sites on plasminogen. This reduces conversion of plasminogen to plasmin, preventing fibrin degradation and preserving the framework of fibrin's matrix structure.[20] Tranexamic acid has roughly eight times the antifibrinolytic activity of an older analogue, ε-aminocaproic acid.[citation needed] Tranexamic acid also directly inhibits the activity of plasmin with weak potency (IC50 = 87 mM),[50] and it can block the active-site of urokinase plasminogen activator (uPA) with high specificity (Ki = 2 mM) among all the serine proteases.[51]

Tranexamic acid was first synthesized in 1962 by Japanese researchers Shosuke and Utako Okamoto.[7] It has been included in the WHO list of essential medicines.[52]

TXA is inexpensive and treatment would be considered highly cost effective in high, middle and low income countries.[53]

Tranexamic acid is marketed in the U.S. and Australia in tablet form as Lysteda and in Australia and Jordan it is marketed in an IV form and tablet form as Cyklokapron, in the UK as Cyclo-F and Femstrual, in Asia as Transcam, in Bangladesh as Tracid, in India as Pause, in Pakistan as Transamin, in South America as Espercil, in Japan as Nicolda, in France, Belgium and Romania as Exacyl and in Egypt as Kapron. In the Philippines, its capsule form is marketed as Hemostan and In Israel as Hexakapron.[citation needed]

In March 2011 the status of tranexamic acid for treatment of heavy menstrual bleeding was changed in the UK, from PoM (Prescription only Medicines) to P (Pharmacy Medicines)[54] and became available over the counter in UK pharmacies under the brand names of Cyklo-F and Femstrual, initially exclusively for Boots pharmacy, which has sparked some discussion about availability.[55] (In parts of Europe it had then been available OTC for over a decade.[citation needed]) Regular liver function tests are recommended when using tranexamic acid over a long period of time.[56]