Toxic shock syndrome (TSS) is a condition caused by bacterial toxins.[2] Symptoms may include fever, rash, skin peeling, and low blood pressure.[2] There may also be symptoms related to the specific underlying infection such as mastitis, osteomyelitis, necrotising fasciitis, or pneumonia.[2]

TSS is typically caused by bacteria of the Streptococcus pyogenes or Staphylococcus aureus type, though others may also be involved.[2][3] Streptococcal toxic shock syndrome is sometimes referred to as toxic-shock-like syndrome (TSLS).[2] The underlying mechanism involves the production of superantigens during an invasive streptococcus infection or a localized staphylococcus infection.[2] Risk factors for the staphylococcal type include the use of very absorbent tampons, and skin lesions in young children.[2] Diagnosis is typically based on symptoms.[2]

Treatment includes intravenous fluids, antibiotics, incision and drainage of any abscesses, and possibly intravenous immunoglobulin.[2][5] The need for rapid removal of infected tissue via surgery in those with a streptococcal cause, while commonly recommended, is poorly supported by the evidence.[2] Some recommend delaying surgical debridement.[2] The overall risk of death is about 50% in streptococcal disease, and 5% in staphylococcal disease.[2] Death may occur within 2 days.[2]

Symptoms of toxic shock syndrome (TSS) vary depending on the underlying cause. TSS resulting from infection with the bacterium Staphylococcus aureus typically manifests in otherwise healthy individuals via signs and symptoms including high fever, accompanied by low blood pressure, malaise and confusion,[3] which can rapidly progress to stupor, coma, and multiple organ failure. The characteristic rash, often seen early in the course of illness, resembles a sunburn[3] (conversely, streptococcal TSS will rarely involve a sunburn-like rash), and can involve any region of the body including the lips, mouth, eyes, palms and soles of the feet.[3] In patients who survive, the rash desquamates (peels off) after 10–21 days.[3]

STSS caused by the bacterium Streptococcus pyogenes, or TSLS, typically presents in people with pre-existing skin infections with the bacteria. These individuals often experience severe pain at the site of the skin infection, followed by rapid progression of symptoms as described above for TSS.

In both TSS (caused by S. aureus) and TSLS (caused by S. pyogenes), disease progression stems from a superantigen toxin. The toxin in S. aureus infections is TSS Toxin-1, or TSST-1. The TSST-1 is secreted as a single polypeptide chain. The gene encoding toxic shock syndrome toxin is carried by a mobile genetic element of S. aureus in the SaPI family of pathogenicity islands.[6] The toxin causes the non-specific binding of MHC II, on professional antigen presenting cells, with T-cell receptors, on T cells.

In typical T-cell recognition, an antigen is taken up by an antigen-presenting cell, processed, expressed on the cell surface in complex with class II major histocompatibility complex (MHC) in a groove formed by the alpha and beta chains of class II MHC, and recognized by an antigen-specific T-cell receptor. This results in polyclonal T-cell activation. Superantigens do not require processing by antigen-presenting cells but instead, interact directly with the invariant region[citation needed] of the class II MHC molecule. In patients with TSS, up to 20% of the body's T-cells can be activated at one time. This polyclonal T-cell population causes a cytokine storm,[5] followed by a multisystem disease.

For staphylococcal toxic shock syndrome, the diagnosis is based upon CDC criteria defined in 2011, as follows:[7]

Cases are classified as confirmed or probable as follows:

The severity of this disease frequently warrants hospitalization. Admission to the intensive care unit is often necessary for supportive care (for aggressive fluid management, ventilation, renal replacement therapy and inotropic support), particularly in the case of multiple organ failure.[8] Treatment includes removal or draining of the source of infection—often a tampon—and draining of abscesses. Outcomes are poorer in patients who do not have the source of infection removed.[8]

Antibiotic treatment should cover both S. pyogenes and S. aureus. This may include a combination of cephalosporins, penicillins or vancomycin. The addition of clindamycin[9] or gentamicin[10] reduces toxin production and mortality.

With proper treatment, people usually recover in two to three weeks.[citation needed] The condition can, however, be fatal within hours.

Staphylococcal toxic shock syndrome is rare and the number of reported cases has declined significantly since the 1980s. Patrick Schlievert, who published a study on it in 2004, determined incidence at three to four out of 100,000 tampon users per year; the information supplied by manufacturers of sanitary products such as Tampax and Stayfree puts it at one to 17 of every 100,000 menstruating females per year.[11][12]

Philip M. Tierno Jr. helped determine that tampons were behind TSS cases in the early 1980s. Tierno blames the introduction of higher-absorbency tampons in 1978. A study by Tierno also determined that all-cotton tampons were less likely to produce the conditions in which TSS can grow; this was done using a direct comparison of 20 brands of tampons including conventional cotton/rayon tampons and 100% organic cotton tampons from Natracare. In fact, Dr Tierno goes as far to state, "The bottom line is that you can get TSS with synthetic tampons, but not with an all-cotton tampon."[13]

A rise in reported cases occurred in the early 2000s: eight deaths from the syndrome in California in 2002 after three successive years of four deaths per year, and Schlievert's study found cases in part of Minnesota more than tripled from 2000 to 2003.[11] Schlievert considers earlier onset of menstruation to be a cause of the rise; others, such as Philip M. Tierno and Bruce A. Hanna, blame new high-absorbency tampons introduced in 1999 and manufacturers discontinuing warnings not to leave tampons in overnight.[11]

TSS is more common during the winter and spring and occurs most often in the young and old.[3] 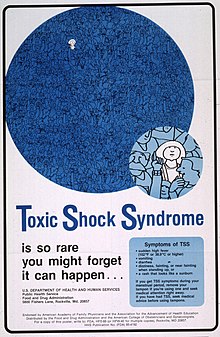 The term "toxic shock syndrome" was first used in 1978 by a Denver pediatrician, James K. Todd, to describe the staphylococcal illness in three boys and four girls aged 8–17 years.[14] Even though S. aureus was isolated from mucosal sites in the patients, bacteria could not be isolated from the blood, cerebrospinal fluid, or urine, raising suspicion that a toxin was involved. The authors of the study noted reports of similar staphylococcal illnesses had appeared occasionally as far back as 1927, but the authors at the time failed to consider the possibility of a connection between toxic shock syndrome and tampon use, as three of the girls who were menstruating when the illness developed were using tampons. Many cases of TSS occurred after tampons were left in after they should have been removed.[15]

Following controversial test marketing in Rochester, New York, and Fort Wayne, Indiana,[16] in August 1978, Procter and Gamble introduced superabsorbent Rely tampons to the United States market[17] in response to women's demands for tampons that could contain an entire menstrual flow without leaking or replacement.[18] Rely used carboxymethylcellulose (CMC) and compressed beads of polyester for absorption. This tampon design could absorb nearly 20 times its own weight in fluid.[19] Further, the tampon would "blossom" into a cup shape in the vagina to hold menstrual fluids without leakage.

In January 1980, epidemiologists in Wisconsin and Minnesota reported the appearance of TSS, mostly in those menstruating, to the CDC.[20] S. aureus was successfully cultured from most of the subjects. The Toxic Shock Syndrome Task Force was created and investigated the epidemic as the number of reported cases rose throughout the summer of 1980.[21] In September 1980, CDC reported users of Rely were at increased risk for developing TSS.[22]

On 22 September 1980, Procter and Gamble recalled Rely[23] following release of the CDC report. As part of the voluntary recall, Procter and Gamble entered into a consent agreement with the FDA "providing for a program for notification to consumers and retrieval of the product from the market".[24] However, it was clear to other investigators that Rely was not the only culprit. Other regions of the United States saw increases in menstrual TSS before Rely was introduced.[25]

It was shown later that higher absorbency of tampons was associated with an increased risk for TSS, regardless of the chemical composition or the brand of the tampon. The sole exception was Rely, for which the risk for TSS was still higher when corrected for its absorbency.[26] The ability of carboxymethylcellulose to filter the S. aureus toxin that causes TSS may account for the increased risk associated with Rely.[19]