Teniposide, sold under the brand name Vumon, is a chemotherapy medication used to treat acute lymphocytic leukemia (ALL) in children.[1] It is a second line agent for this use.[1] Other uses may include small cell lung cancer and lymphoma.[2] It is given by injection into a vein.[1]

Common side effects include low white blood cells, low red blood cells, low platelets, inflammation in the mouth, nausea, hair loss, bleeding, fever, and allergic reactions.[1] Other side effects may include other cancers, tissue death at the site of injection, and low blood pressure.[1] Use in pregnancy may harm the baby.[1] It is in a class of drugs known as podophyllotoxin derivatives and is believed to work by interfering with the production of DNA.[1]

Teniposide is used for the treatment of a number of cancer types in children. In the US, it is approved for the second-line therapy of acute lymphocytic leukemia (ALL) in combination with other antineoplastic drugs.[5] In Europe, it is also approved for the treatment of Hodgkin's lymphoma, generalized malignant lymphoma, reticulocyte sarcoma, acute leukaemia, primary brain tumours (glioblastoma, ependymoma, astrocytoma), bladder cancer, neuroblastoma and other solid tumours in children.[6]

The medication is injected though a vein and burns if it leaks under the skin. It can be used in combination with other anticancer drugs.[6]

The drug is contraindicated during pregnancy and lactation, in patients with severe liver or kidney impairment or severely impaired haematopoiesis.[6]

Teniposide, when used with other chemotherapeutic agents for the treatment of ALL, results in severe bone marrow suppression. Other common side effects include gastrointestinal toxicity, hypersensitivity reactions, and reversible alopecia.[6]

No systematic interaction studies are available. The enzyme inducers phenobarbital and phenytoin have been found to lower its blood plasma concentrations.[7] Theoretically possible interactions include increased plasma concentrations when combined with sodium salicylate, sulfamethizole or tolbutamide, which displace teniposide from plasma protein binding, at least in vitro.[6][5]

Teniposide causes dose-dependent single- and double-stranded breaks in DNA and DNA-protein cross-links.[6] The substance has been found to act as an inhibitor of topoisomerase II (an enzyme that aids in DNA unwinding),[7][8] since it does not intercalate into DNA or bind strongly to DNA. The cytotoxic effects of teniposide are related to the relative number of double-stranded DNA breaks produced in cells, which are a reflection of the stabilization of a topoisomerase II-DNA intermediate.[citation needed] 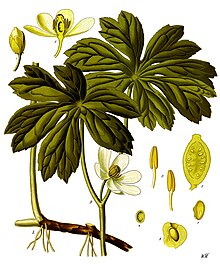 An illustration of the wild mandrake, showing part of the rhizome (at bottom)

Teniposide is a semisynthetic derivative of podophyllotoxin[6] from the rhizome of the wild mandrake (Podophyllum peltatum). More specifically, it is a glycoside of podophyllotoxin with a D-glucose derivative. It is chemically similar to the anti-cancer drug etoposide, being distinguished only by a thienyl rest where etoposide has a methyl.[7] Both these compounds have been developed with the aim of creating less toxic derivatives of podophyllotoxin.[9]