Suxamethonium chloride, also known as suxamethonium or succinylcholine, is a medication used to cause short-term paralysis as part of general anesthesia.[2] This is done to help with tracheal intubation or electroconvulsive therapy.[2] It is given either by injection into a vein or muscle.[3] When used in a vein onset of action is generally within one minute and effects last for up to 10 minutes.[3]

Common side effects include low blood pressure, increased saliva production, muscle pain, and rash.[3] Serious side effects include malignant hyperthermia and allergic reactions.[4] It is not recommended in people who are at risk of high blood potassium or a history of myopathy.[2] Use during pregnancy appears to be safe for the baby.[5] Suxamethonium is in the neuromuscular blocker family of medications and is of the depolarizing type.[3] It works by blocking the action of acetylcholine on skeletal muscles.[3]

Suxamethonium was described as early as 1906 and came into medical use in 1951.[6] It is on the World Health Organization's List of Essential Medicines.[7] Suxamethonium is available as a generic medication.[3] The wholesale cost in the developing world is about US$0.45 to US$1.31 a dose.[8] It may colloquially be referred to as "sux".[6] 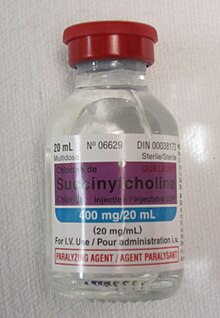 A vial of suxamethonium chloride

Its medical uses are limited to short-term muscle relaxation, usually for facilitation of endotracheal intubation. It is popular due to its rapid onset and brief duration of action. The former is a major point of consideration in the context of trauma care, where endotracheal intubation may need to be completed very quickly. The latter means that, should attempts at endotracheal intubation fail and the person cannot be ventilated, there is a prospect for neuromuscular recovery and the onset of spontaneous breathing before low blood oxygen levels occurs. It may be better than rocuronium in people without contraindications due to its faster onset of action and shorter duration of action.[9]

Suxamethonium is also commonly used as the sole muscle relaxant during electroconvulsive therapy, favoured for its short duration of action.[medical citation needed]

Suxamethonium has a duration of effect usually in the range of a few minutes. When plasma levels of butyrylcholinesterase are diminished or an atypical form is present (an otherwise harmless inherited disorder), paralysis may last much longer, as is the case in liver failure or in neonates.[10]

Suxamethonium does not produce unconsciousness or anesthesia, and its effects may cause considerable psychological distress while simultaneously making it impossible for a patient to communicate. Therefore, administration of the drug to a conscious patient is contraindicated.[medical citation needed]

Severely high blood levels of potassium will cause changes in cardiac electrophysiology, which, if severe, can result in asystole.

Malignant hyperthermia (MH) from suxamethonium administration can result in a drastic and uncontrolled increase in skeletal muscle oxidative metabolism. This overwhelms the body's capacity to supply oxygen, remove carbon dioxide, and regulate body temperature, eventually leading to circulatory collapse and death if not treated quickly.

Susceptibility to malignant hyperthermia is often inherited as an autosomal dominant disorder, for which there are at least six genetic loci of interest, the most prominent being the ryanodine receptor gene (RYR1). MH susceptibility is phenotype and genetically related to central core disease (CCD), an autosomal dominant disorder characterized both by MH symptoms and by myopathy. MH is usually unmasked by anesthesia, or when a family member develops the symptoms. There is no simple, straightforward test to diagnose the condition. When MH develops during a procedure, treatment with dantrolene sodium is usually initiated; dantrolene and the avoidance of suxamethonium administration in susceptible people have markedly reduced the mortality from this condition.

The normal short duration of action of suxamethonium is due to the rapid metabolism of the drug by non-specific plasma cholinesterases. However plasma cholinesterase activity is reduced in some people due to either genetic variation or acquired conditions, which results in a prolonged duration of neuromuscular block. Genetically, ninety six percent of the population have a normal (Eu:Eu) genotype and block duration; however, some people have atypical genes (Ea, Es, Ef) which can be found in varying combinations with the Eu gene, or other atypical genes (see Pseudocholinesterase deficiency). Such genes will result in a longer duration of action of the drug, ranging from 20 minutes up to several hours. Acquired factors that affect plasma cholinesterase activity include pregnancy, liver disease, kidney failure, heart failure, thyrotoxicosis, and cancer, as well as a number of other drugs.[13]

If unrecognized by a clinician it could lead to awareness if anesthesia is discontinued whilst still paralyzed or hypoxemia (and potentially fatal consequences) if artificial ventilation is not maintained. Normal treatment is to maintain sedation and ventilate the patient on an intensive care unit until muscle function has returned. Blood testing for cholinesterase function can be performed.[medical citation needed]

Deliberate induction of conscious apnea using this drug led to its use as a form of aversion therapy in the 1960s and 1970s in some prison and institutional settings.[14][15][16] This use was discontinued after negative publicity concerning the terrifying effects on subjects of this treatment and ethical questions about the punitive use of painful aversion.[citation needed]

There are two phases to the blocking effect of suxamethonium.

Phase 1 blocking has the principal paralytic effect. Binding of suxamethonium to the nicotinic acetylcholine receptor results in opening of the receptor's monovalent cation channel; a disorganized depolarization of the motor end-plate occurs and calcium is released from the sarcoplasmic reticulum.

In normal skeletal muscle, acetylcholine dissociates from the receptor following depolarization and is rapidly hydrolyzed by the enzyme acetylcholinesterase. The muscle cell is then ready for the next signal.

Suxamethonium has a longer duration of effect than acetylcholine, and is not hydrolyzed by acetylcholinesterase. By maintaining the membrane potential above threshold, it does not allow the muscle cell to repolarize. When acetylcholine binds to an already depolarized receptor, it cannot cause further depolarization.

Calcium is removed from the muscle cell cytoplasm independent of repolarization (depolarization signaling and muscle contraction are independent processes). As the calcium is taken up by the sarcoplasmic reticulum, the muscle relaxes. This explains muscle flaccidity rather than tetany following fasciculations.

The results are membrane depolarization and transient fasciculations, followed by paralysis.

While this phase is not abnormal and is a part of its mechanism of action, it is undesirable during surgery, due to the inability to depolarize the cell again. Often, patients must be on a ventilator for hours if Phase 2 block occurs. It is caused by the blood concentration of suxamethonium exceeding the therapeutic window. Desensitization occurs at the nerve terminal, and the myocyte becomes less sensitive to acetylcholine; the membrane repolarizes and cannot be depolarized again.

Suxamethonium is an odorless, white crystalline substance. Aqueous solutions have a pH of about 4. The dihydrate melts at 160 °C, whereas the anhydrous melts at 190 °C. It is highly soluble in water (1 gram in about 1 mL), soluble in ethyl alcohol (1 gram in about 350 mL), slightly soluble in chloroform, and practically insoluble in ether. Suxamethonium is a hygroscopic compound.[17] The compound consists of two acetylcholine molecules that are linked by their acetyl groups. It can also be viewed as a central moiety of succinic acid with two choline moieties, one on each end.

Suxamethonium was first discovered in 1906 by Reid Hunt and René de M. Taveau. When studying the drug, animals were given curare and thus they missed the neuromuscular blocking properties of suxamethonium. Instead in 1949 an Italian group led by Daniel Bovet was first to describe succinylcholine induced paralysis. The clinical introduction of suxamethonium was described in 1951 by several groups. Papers published by Stephen Thesleff and Otto von Dardel in Sweden are important but also to be mentioned is work by Bruck, Mayrhofer and Hassfurther in Austria, Scurr and Bourne in UK, and Foldes in America.[18]

It is available in German-speaking countries under the trade name Lysthenon among others.[19]

It is recommended that the vials be stored at a temperature between 2°-8 °C. The multi-dose vials are stable for up to 14 days at room temperature without significant loss of potency.[20] Unless otherwise indicated in the prescribing information, room temperature for storage of medications is 15°-25 °C (59°-77 °F).[21]

It is sometimes used in combination with pain medications and sedatives for euthanasia and immobilization of horses.[citation needed]