Types include serous tumors, mucinous tumors, endometrioid tumors, clear cell tumors, transitional cell tumors, and epithelial-stromal such as carcinosarcoma.[2] Serous tumors make up about 30%, mucinous about 13%, and endometroid about 3% of ovarian tumors.[1] They can be further classified as benign (60%), borderline (5%), or malignant (35%).[3] Some malignant versions are known as ovarian adenocarcinomas.[4]

Risk factors include not having children, high fat diet, family history, and late menopause.[3] A tubal ligation and the use of birth control pills decreases the risk.[3] They are believed to start from the ovarian surface epithelium, endometrium or fallopian tubes.[3] Diagnosis is often suspected based on medical imaging and confirmed by microscopic examination.[1][4] 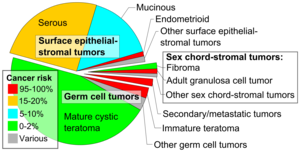 Ovarian tumors by incidence and risk of ovarian cancer, with surface epithelial-stromal tumors at top.[6] 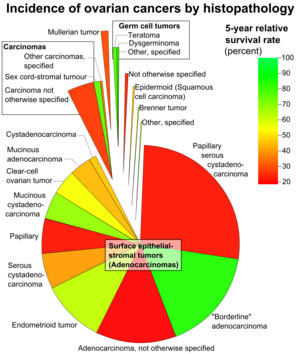 Ovarian cancers in women aged 20+, with area representing relative incidence and color representing 5-year relative survival rate.[7] [7]Surface epithelial-stromal tumors are labeled in center of the main diagram, and represent all types except the ones separated at top.

Epithelial-stromal tumors are classified on the basis of the epithelial cell type, the relative amounts of epithelium and stroma, the presence of papillary processes, and the location of the epithelial elements. Microscopic pathological features determine whether a surface epithelial-stromal tumor is benign, a borderline tumor, or malignant (evidence of malignancy and stromal invasion). Borderline tumors are of uncertain malignant potential.

This group consists of serous, mucinous, endometrioid, clear cell, and brenner (transitional cell) tumors, though there are a few mixed, undifferentiated and unclassified types.

Histopathology of lining of a benign serous tumor of the ovary. Benign serous ovarian tumors are thin walled unilocular cysts that are lined by ciliated pseudostratified cuboidal or columnar epithelium.[8]

The chance of malignancy of the tumor increases with the amount of solid areas present, including both papillary structures and any necrotic tissue present.

The prognosis of a serous tumor, like most neoplasms, depends on

The five year survival rate of borderline tumors and malignant tumors confined to the ovaries are 100% and 70% respectively. If the peritoneum is involved, these rates become 90% and 25%.

While the 5-year survival rates of borderline tumors are excellent, this should not be seen as evidence of cure, as recurrences can occur many years later.

Mucinous tumors are characterized by a lining of tall columnar epithelial cells with apical mucin and the absence of cilia, similar in appearance with benign cervical or intestinal epithelia. The appearance can look similar to colonic or ovarian cancer, but typically originates from the appendix (see mucinous adenocarcinoma with clinical condition Pseudomyxoma peritonei). Clear stromal invasion is used to differentiate borderline tumors from malignant tumors.

10-year survival rates for borderline tumors contained within the ovary, malignant tumors without invasion, and invasive malignant tumors are greater than 95%, 90%, and 66%, respectively. One rare but noteworthy condition associated with mucinous ovarian neoplasms is pseudomyxoma peritonei. As primary ovarian mucinous tumors are usually unilateral (in one ovary), the presentation of bilateral mucinous tumors requires exclusion of a non-ovarian origin, usually the appendix.

Endometrioid tumors account for approximately 20% of all ovarian cancers and are mostly malignant (endometroid carcinomas). They are made of tubular glands bearing a close resemblance to benign or malignant endometrium. 15-30% of endometrioid carcinomas occur in individuals with carcinoma of the endometrium, and these patients have a better prognosis. They appear similar to other surface epithelial-stromal tumors, with solid and cystic areas. 40% of these tumors are bilateral, when bilateral, metastases is often present.

Prognosis again is dependent on the spread of the tumor, as well as how differentiated the tumor appears. The overall prognosis is somewhat worse than for serous or mucinous tumors, and the 5-year survival rate for patients with tumors confined to the ovary is approximately 75%.

Clear cell tumors are characterized by large epithelial cells with abundant clear cytoplasm and may be seen in association with endometriosis or endometrioid carcinoma of the ovary, bearing a resemblance to clear cell carcinoma of the endometrium. They may be predominantly solid or cystic. If solid, the clear cells tend to be arranged in sheets or tubules. In the cystic variety, the neoplastic cells make up the cyst lining.

These tumors tend to be aggressive, the five year survival rate for tumors confined to the ovaries is approximately 65%. If the tumor has spread beyond the ovary at diagnosis, the prognosis is poor

Brenner tumors are uncommon surface-epithelial stromal cell tumors in which the epithelial cell (which defines these tumors) is a transitional cell. These are similar in appearance to bladder epithelia. The tumors may be very small to very large, and may be solid or cystic. Histologically, the tumor consists of nests of the aforementioned transitional cells within surrounding tissue that resembles normal ovary. Brenner tumors may be benign or malignant, depending on whether the tumor cells invade the surrounding tissue.

Small cell tumours are rare and aggressive, they contribute to less than 2% of all gynaecologic malignancies.[11] The average age of diagnosis is 24 years old, and the majority of patients also present with hypercalcemia (62%).[12] It typically present with a unilateral large tumor.[12] Most women die within a year of diagnosis.[12]

For advanced cancer of this histology, the US National Cancer Institute recommends a method of chemotherapy that combines intravenous (IV) and intraperitoneal (IP) administration.[15] Preferred chemotherapeutic agents include a platinum drug with a taxane.

Fertility subsequent to treatment of surface epithelial-stromal tumors depends mainly on histology and initial staging to separate it into early borderline (or more benign) versus advanced stages of borderline (or more malignant).[17] Conservative management (without bilateral oophorectomy) of early stage borderline tumors have been estimated to result in chance of over 50% of spontaneous pregnancy with a low risk of lethal recurrence of the tumor (0.5%).[17] On the other hand, in cases of conservative treatment in advanced stage borderline tumors, spontaneous pregnancy rates have been estimated to be 35% and the risk of lethal recurrence 2%.[17]