Risk factors include varicose veins, pregnancy, certain genetic conditions such as factor V Leiden mutation, cancer, birth control pills, obesity, recent surgery, and heart failure.[1] The underlying mechanism may involve increased clotting, decreased movement, or injury to the vein.[1] The greater saphenous vein is involved about 70% of the time, and the small saphenous vein about 15% of the time.[1] It is a type of thrombophlebitis.[2] Diagnosis is often based on symptoms and confirmed by ultrasound.[1]

One study found a rate of 6 per 1,000 people per year.[1] Women are more commonly affected than men.[1] The typical age of those affected is 60.[1] Those with multiple episodes, known as Trousseau syndrome, should be investigated for cancer.[1] SVT was first described in ancient India by Sushruta.[4] 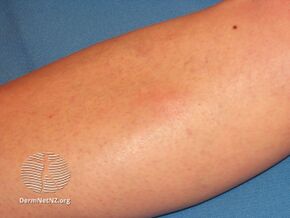 SVT is recognized by the presence of pain, warmth, redness, and tenderness over a superficial vein.[5] The SVT may present as a "cord-like" structure upon palpation.[5] The affected vein may be hard along its entire length.[6] SVTs tend to involve the legs, though they can affect any superficial vein (e.g. those in the arms).[5]

When it occurs in the leg, the great saphenous vein is usually involved, although other locations are possible.[7]

SVT in the lower extremities can lead to a complication in which the clot travels to the lungs, called pulmonary embolism (PE).[8] This is because lower limb SVTs can migrate from superficial veins into deeper veins.[8] In a French population, the percent of people with SVTs that also had PEs was 4.7%.[8] In the same population, deep vein thrombosis (DVT) was found in 24.6% of people with SVTs.[8] However, because superficial veins lack muscular support, any clots that form are far less likely to be squeezed by muscle contraction, dislodged, and induce a PE.[6]

Hypercoagulable states due to genetic conditions that increase the risk of clotting may contribute to the development of SVT, such as factor V Leiden, prothrombin 20210A mutation, and protein C, S, and antithrombin III and factor XII deficiency.[5]

The mechanism for the development of an SVT depends upon the specific etiology of the SVT. For example, varicose veins and prolonged bed rest both may induce SVTs due to slowing the flow of blood through superficial veins.[5]

SVTs may be diagnosed based upon clinical criteria by a healthcare professional.[5] A more specific evaluation can be made by ultrasound.[5] An ultrasound can be useful in situations in which an SVT occurs above the knee and is not associated with a varicose vein, because ultrasounds can detect more serious clots like DVTs.[6] The diagnostic utility of D-dimer testing in the setting of SVTs has yet to be fully established.[8]

SVTs can be classified as either varicose vein (VV) or non-varicose (NV) associated.[5] NV-SVTs are more likely to be associated with genetic procoagulable states compared to VV-SVTs.[5] SVTs can also be classified by pathophysiology. That is, primary SVTs are characterized by inflammation that is localized to the veins. Secondary SVTs are characterized by systemic inflammatory processes.[5]

A subclass of SVTs are septic thrombophlebitis, which are SVTs that occur in the setting of an infection.[11]

The goal of treatment in SVT is to reduce local inflammation and prevent the SVT from extending from its point of origin.[5] Treatment may entail the use of compression, physical activity, medications, or surgical interventions.[5] The optimal treatment for many SVT sites (i.e. upper limbs, neck, abdominal and thoracic walls, and the penis) has not been determined.[8]

Inactivity is contraindicated in the aftermath of an SVT.[5] Uninterrupted periods of sitting or standing may cause the SVT to elongate from its point of origin, increasing the risk for complications and clinical worsening.[5]

Medications used for the treatment of SVT include anticoagulants, NSAIDs (except aspirin), antibiotics, and corticosteroids.[5]

SVTs that occur within the great saphenous vein within 3 cm of the saphenofemoral junction are considered to be equivalent in risk to DVTs.[8] These high risk SVTs are treated identically with therapeutic anticoagulation.[8] Anticoagulation is also used for intermediate risk SVTs that are greater than 3 cm from the saphenofemoral junction or are greater than 4–5 cm in length.[8]

NSAIDs (non-steroidal anti-inflammatory drugs) can be used in both oral or topical formulations for the relief of SVT symptoms.[8] The British Committee for Standards in Haematology guidelines recommend the use of NSAIDs for low-risk SVTs (thrombus <4–5 cm in length, no additional risk factors for thromboembolic events).[8] NSAIDs are used for treatment durations of 8–12 days.[8]

Surgical interventions are used for both symptomatic relief of the SVT as well as for preventing the development of more serious complications (e.g. pulmonary embolism).[8] Surgical interventions include ligation of the saphenofemoral junction, ligation and stripping of the affected veins, and local thrombectomy.[8] Because of the risk of symptomatic pulmonary embolism with surgery itself, surgical interventions are not recommended for the treatment of lower limb SVTs by the 2012 American College of Chest Physicians guidelines and the 2012 British Committee for Standards in Haematology guidelines.[8] The use of surgery for the treatment of SVT is controversial.[12]

SVT is often a mild, self-resolving medical condition.[5] The inflammatory reaction may last up to 2–3 weeks, with possible recanalization of the thrombosed vein occurring in 6–8 weeks.[5] The superficial vein may continue to be hyperpigmented for several months following the initial event.[5]

SVTs have been historically considered to be benign diseases, for which treatment was limited to conservative measures.[12] However, an increased awareness of the potential risks of SVTs developing into more serious complications has prompted more research into the diagnosis, classification, and treatment of SVTs.[12]

A Cochrane review recommends that future research investigate the utility of oral, topical, and surgical treatments for preventing the progression of SVTs and the development of thromboembolic complications.[15][16]