The median time of onset from ingestion of shiitake mushrooms is typically 24 hours, ranging from 12 hours to 5 days. Most patients completely recover by 3 weeks, with or without treatment.[4] Although the pathogenesis of shiitake induced flagellate dermatitis is not clear, the theory most argued for is a toxic reaction to lentinan, a polysaccharide isolated from shiitake mushrooms.[2] However, Type I and Type IV allergic hypersensitivities have also been supported by the 24-hour median time of onset, clearance in 3–21 days, severe pruritus, benefit of steroids and antihistamines, and lack of grouped outbreaks in people exposed to shared meals containing shiitake mushrooms.[2][4] Most cases reported shortly after its discovery were due to consumption of raw shiitake mushrooms, but several cases have since been reported after consumption of fully cooked mushrooms.[3] 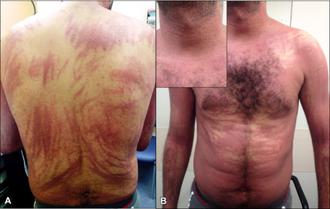 (a) Flagellate pattern on back and chest