Sheehan's syndrome, also known as postpartum pituitary necrosis, is damage to the pituitary gland as a result of low blood pressure from bleeding.[1] The initial symptom is often a lack of breast milk production.[1] Other symptoms may include sexual dysfunction, menstrual abnormalities, low thyroid (tiredness, constipation, and loss of pubic hair), and adrenal insufficiency (weight loss, low blood sugar, and low blood sodium).[1] Rarely diabetes insipidus may occur.[2] Symptoms may not develop until months or years after the evident.[2][1]

Often the term is used to only refers to cases due to bleeding after childbirth, though less commonly some include those due to bleeding from trauma.[2][1] The pituitary is at particular risk when enlarged from pregnancy.[2] Other factors that may play a role include vasospasm and blood clotting.[2] Diagnosis is generally suspected based on symptoms and history and confirmed by blood tests or MRI.[2][1]

While rare in developed countries, it remains relatively common in the developing world.[1] In Kashmir, India about 3% of women over the age of 20 who have had children are affected.[2] Outcomes can be poor if the diagnosis is not made in a timely manner.[1] It was first described in 1937 by Harold Sheehan.[1]

The various signs and symptoms in Sheehan's syndrome are caused by damage to the pituitary, thereby causing a decrease in one or more of the hormones it normally secretes. Because the pituitary controls many glands in the endocrine system, partial or complete loss of a variety of functions may result.[3]

The most common initial symptoms of Sheehan's syndrome are agalactorrhea (absence of lactation) and/or difficulties with lactation.[4] Many women also report amenorrhea or oligomenorrhea after delivery.[4] In some cases, a woman with Sheehan syndrome is relatively asymptomatic; therefore, the diagnosis would not be made until years later, with features of hypopituitarism.[4] Such features include secondary hypothyroidism (hypothyroidism due to pituitary dysfunction) with tiredness, intolerance to cold, constipation, weight gain, hair loss and slowed thinking, as well as a slowed heart rate and low blood pressure. Another such feature is secondary adrenal insufficiency (lack of ACTH secretion from the anterior pituitary). In a more chronic case, it is similar to Addison's disease with symptoms including fatigue, weight loss, hypoglycemia (low blood sugar levels), anemia and hyponatremia (low sodium levels). Such a patient may become acutely exacerbated when her body is stressed by a severe infection or surgery years after her delivery: a condition equivalent with an Addisonian crisis.[4] The symptoms of adrenal crisis should be treated immediately and can be life-threatening.[5] Gonadotropin deficiency will often cause amenorrhea, oligomenorrhea, hot flashes, or decreased libido.[4] Cessation of menses is an important indicator of Gonadotropin deficiency as a result of Sheehan’s syndrome.[6] Growth hormone deficiency causes many vague symptoms including fatigue and decreased muscle mass.[4]

Growth-hormone deficiency is the most common symptom of hypopituitarism seen in Sheehan’s syndrome with a 90–100% occurrence seen in the Netherlands, Costa Rica, and Saudi Arabia. In these populations the occurrence of Cortisol, TSH, and gonadotropin deficiencies ranges from 50 to 100%.[6] Hematological changes may occur due to a decrease in erythropoietin synthesis as a result of these cortisol and thyroid hormone decreases.[7]

Uncommonly, Sheehan syndrome may also appear acutely after delivery, mainly by hyponatremia.[4] Electrolytic imbalances might result from the increased secretion of ADH, which may be caused by a decrease in blood pressure due to lower glucocorticoid deficiency. There are several possible mechanisms by which hypopituitarism can result in hyponatremia, including decreased free-water clearance by hypothyroidism, direct syndrome of inappropriate antidiuretic hormone (ADH) hypersecretion, decreased free-water clearance by glucocorticoid deficiency (independent of ADH).[4] Serum potassium levels, however, will not change due to Sheehan’s syndrome. This is because potassium levels are primarily regulated independently from the pituitary gland (the renin-angiotensin-aldosterone system begins in the kidney).[8]

In the developed world Sheehan’s Syndrome is a rare complication of pregnancy, usually manifesting after excessive blood loss after delivery. The presence of disseminated intravascular coagulation (i.e., in amniotic fluid embolism or HELLP syndrome) also appears to be a factor in its development. A retrospective study in Turkey found that the prevalence of Sheehan’s syndrome was directly proportional to the amount of at-home deliveries each decade.[6] This may be due to previously limited obstetric techniques present in a home environment. For example, an area of improvement in preventing the condition could be the an increase in the efficacy of treatment to hypovolemic shock through blood transfusion.[7]

Some possible predisposing factors to Sheehan’s syndrome may include: inherited or acquired disseminated blood coagulation (DIC), restriction pituitary blood supply, small sella size, vasospasm, or thrombosis.[7] Post-Partum Hemorrhaging (PPH) is believed to be a predictor of Sheehan’s syndrome, so the symptoms of anaemia, obesity, and advanced maternal age may increase the risk of Sheehan Syndrome.[7] Atony of the uterus may be related to PPH that could induce Sheehan’s syndrome. This results in the abnormally prolonged flow of blood to the placenta after delivery.[7]

Sheehan's syndrome is caused by damage to the pituitary, thereby causing a decrease in one or more of the hormones it normally secretes. The anterior pituitary is supplied by a low pressure portal venous system.[7] A 1995 study found that 56.2% of patients with diagnosed Sheehan’s syndrome experienced a loss of all pituitary hormones (with the remaining 43.8% having selective pituitary insufficiency). Since the growth hormone-secreting cells are located at the periphery of the pituitary (and are therefore most likely to be affected by ischemia), all of the patients experienced growth hormone deficiency.[6]

Hormonal assays are conducted to determine a patient has low levels of T4, TSH, estrogen, gonadotropin, cortisol, and ACTH depending on the extent of necrosis.[6] It might be difficult to detect damage to these hormone pathways if hormone levels are at the borderline of the abnormal range. In this case, stimulation tests will be done to determine if the pituitary is responsive to hypothalamic hormones.[7] For example, to determine deficiencies in cortisol release, synthetic ACTH might be administered, and hormonal assays will be conducted to determine the strength of the response. Additionally, MRI of the pituitary and hypothalamus: this helps to exclude tumor or other pathologies. 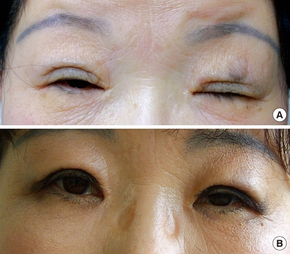 (A) Bilateral eyelid dropping (B) which resolves 3 months after replacement of thyroid hormone.

Lifelong hormone replacement therapy for the hormones that are missing.[9]

This may involve treatment with glucocorticoids. After hormone profiling, treatment with cortisol, ACTH, thyroid hormones, gonadotropins, and prolactin as seen in cases of hypopituitarism may occur.[9]

In a study of 1,034 symptomatic adults, Sheehan’s syndrome was found to be the sixth-most frequent etiology of growth hormone deficiency, being responsible for 3.1% of cases (versus 53.9% due to a pituitary tumor).[6]

Additionally, it was found that the majority of women who experienced Sheehan syndrome gave birth at home rather than in a hospital.[7]

The specific association with postpartum shock or hemorrhage was described in 1937 by the British pathologist Harold Leeming Sheehan (1900–1988).[10] The initial distinction was made in the research article “Post-Partum Necrosis of the Anterior Pituitary”.[11] In his research, Dr. Sheehan reviewed (through autopsy) the effects of pituitary necrosis on 12 cases of patient’s that experienced postpartum necrosis.[11] He observed cases where lesions and death occurred during or after pregnancy, as well as cases where death occurred in the late stage of necrosis (years later). This started the initial distinction of Sheehan’s syndrome from Simmonds’ disease (also known as hypopituitarism). Dr. Sheehan noted that significant features of these patient cases was hemorrhaging, which in his experience was most commonly caused by either: placenta Previa (low placenta), uterine rupture, cervical or uterine tears, post-partum atony, or retained placenta. Simmonds' disease, however, occurs in either sex due to causes unrelated to pregnancy.[7]

However, in his 1939 publication: “Simmonds’ Disease due to Post-partum Necrosis of the Anterior Pituitary”, Dr. Sheehan displays post-partum necrosis as a cause of Simmonds’ disease, thus establishing the relationship between the two conditions.[12] According to Sheehan in 1939 approximately 41% of survivors of severe postpartum hemorrhage (PPH) and/or hypovolemic shock experienced severe or partial hypopituitarism.[7]