Selinexor sold under the brand name Xpovio among others, is a medication used to treat multiple myeloma.[2] It is used in cases were at least 4 other treatments have been found ineffective.[2] It is taken by mouth together with dexamethasone.[2][1]

Common side effects include nausea, weight loss, diarrhea, tiredness, low platelets, low red blood cells, low white blood cells, and low sodium.[1] Other side effects may include syncope.[2] Use during pregnancy may harm the baby.[2] It is a inhibitor of nuclear export and works by blocking the action of exportin 1.[1]

Selinexor is approved in combination with bortezomib and dexamethasone for the treatment of adults with multiple myeloma who have received at least one prior therapy.[6] Selinexor is also approved for use in combination with the steroid dexamethasone in people with relapsed or refractory multiple myeloma who have received at least four prior therapies and whose disease is refractory to at least two proteosome inhibitors, at least two immunomodulatory agents, and an anti-CD38 monoclonal antibody (so-called "quad-refractory" or "penta-refractory" myeloma),[7] for whom no other treatment options are available.[8][9] It is the first drug to be approved for this indication.[10]

In June 2020, the U.S. Food and Drug Administration (FDA) approved an additional indication for selinexor to treat adults with relapsed or refractory diffuse large B-cell lymphoma (DLBCL), not otherwise specified, including DLBCL arising from follicular lymphoma, after at least two lines of systemic therapy.[11]

In the European Union, selinexor is indicated in combination with dexamethasone for the treatment of multiple myeloma in adults who have received at least four prior therapies and whose disease is refractory to at least two proteasome inhibitors, two immunomodulatory agents and an anti-CD38 monoclonal antibody, and who have demonstrated disease progression on the last therapy.[1]

In clinical trials, it was associated with a high incidence of severe side effects, including low platelet counts and low blood sodium levels.[8][9][12]

The most common adverse reactions (incidence ≥20%) in people with diffuse large B-cell lymphoma (DLBCL), excluding laboratory abnormalities, were fatigue, nausea, diarrhea, appetite decrease, weight decrease, constipation, vomiting, and pyrexia.[11] Grade 3-4 laboratory abnormalities in ≥15% were thrombocytopenia, lymphopenia, neutropenia, anemia, and hyponatremia.[11] Serious adverse reactions occurred in 46% of people, most often from infection.[11] Thrombocytopenia was the leading cause of dose modifications.[11] Gastrointestinal toxicity developed in 80% of people and any grade hyponatremia developed in 61%.[11] Central neurological adverse reactions occurred in 25% of people, including dizziness and mental status changes.[11] 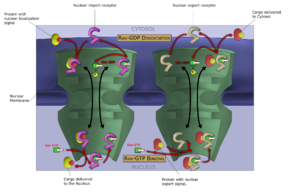 Schematic illustration of the Ran cycle of nuclear transport. Selinexor inhibits this process at the nuclear export receptor (upper right).

Like other selective inhibitors of nuclear export (SINEs), selinexor works by binding to exportin 1 (also known as XPO1 or CRM1). XPO1 is a karyopherin which performs nuclear transport of several proteins, including tumor suppressors, oncogenes, and proteins involved in governing cell growth, from the cell nucleus to the cytoplasm; it is often overexpressed and its function misregulated in several types of cancer.[14] By inhibiting the XPO1 protein, SINEs lead to a buildup of tumor suppressors in the nucleus of malignant cells and reduce levels of oncogene products which drive cell proliferation. This ultimately leads to cell cycle arrest and death of cancer cells by apoptosis.[14][15][3] In vitro, this effect appeared to spare normal (non-malignant) cells.[14][16]

Inhibiting XPO1 affects many different cells in the body which may explain the incidence of adverse reactions to selinexor.[15] Thrombocytopenia, for example, is a mechanistic and dose-dependent effect, occurring because selinexor causes a buildup of the transcription factor STAT3 in the nucleus of hematopoietic stem cells, preventing their differentiation into mature megakaryocytes (platelet-producing cells) and thus slowing production of new platelets.[15]

Selinexor is a fully synthetic small-molecule compound, developed by means of a structure-based drug design process known as induced-fit docking. It binds to a cysteine residue in the nuclear export signal groove of exportin 1. Although this bond is covalent, it is slowly reversible.[14]

Selinexor was developed by Karyopharm Therapeutics, a pharmaceutical company focused on the development of drugs that target nuclear transport. It was approved in the United States in July 2019,[17][18][19] on the basis of a single-arm Phase IIb clinical trial. The FDA decided to grant accelerated approval despite a previous recommendation from an FDA Advisory Committee Panel which had voted 8–5 to delay approving the drug until the results from an ongoing Phase III study were known.[8]

Selinexor in combination with dexamethasone was granted accelerated approval and was granted orphan drug designation.[18] The FDA granted the approval of Xpovio to Karyopharm Therapeutics.[18]

In June 2020, the U.S. Food and Drug Administration (FDA) approved an additional indication for selinexor to treat adults with relapsed or refractory diffuse large B-cell lymphoma (DLBCL), not otherwise specified, including DLBCL arising from follicular lymphoma, after at least two lines of systemic therapy.[11]

Approval was based on SADAL (KCP-330-009; NCT02227251), a multicenter, single-arm, open-label trial in participants with DLBCL after two to five systemic regimens.[11] Participants received selinexor 60 mg orally on days one and three of each week.[11]

In December 2020, the FDA expanded selinexor's approved indication to include its combination with bortezomib and dexamethasone for the treatment of adults with multiple myeloma who have received at least one prior therapy.

On 28 January 2021, the Committee for Medicinal Products for Human Use (CHMP) of the European Medicines Agency (EMA) adopted a positive opinion, recommending the granting of a conditional marketing authorization for the medicinal product Nexpovio intended for the treatment of relapsed and refractory multiple myeloma.[22] The applicant for this medicinal product is Karyopharm Europe GmbH.[22]

Under the codename KPT-330, selinexor was tested in several preclinical animal models of cancer, including pancreatic cancer, breast cancer, non-small-cell lung cancer, lymphomas, and acute and chronic leukemias.[23] In humans, early clinical trials (phase I) have been conducted in non-Hodgkin lymphoma, blast crisis, and a wide range of advanced or refractory solid tumors, including colon cancer, head and neck cancer, melanoma, ovarian cancer, and prostate cancer.[23] Compassionate use in patients with acute myeloid leukemia has also been reported.[23]

The pivotal clinical trial which served to support approval of selinexor for people with relapsed/refractory multiple myeloma was an open-label study of 122 patients known as the STORM trial.[3] In all of the enrolled patients, patients had been treated with a median of seven prior treatment regimens including conventional chemotherapy, targeted therapy with bortezomib, carfilzomib, lenalidomide, pomalidomide, and a monoclonal antibody (daratumumab or isatuximab);[7] nearly all had also undergone hematopoietic stem cell transplantation but had disease that continued to progress.[3] The overall response rate was 26%, including two stringent complete responses; 39% of patients had a minimal response or better. The median duration of response was 4.4 months, median progression-free survival was 3.7 months, and median overall survival was 8.6 months.[24]