Rho(D) immune globulin (RhIG) is a medication used to prevent RhD isoimmunization in mothers who are RhD negative and to treat idiopathic thrombocytopenic purpura (ITP) in people who are Rh positive.[2] It is often given both during and following pregnancy.[2] It may also be used when RhD negative people are given RhD positive blood.[2] It is given by injection into muscle or a vein.[2] A single dose lasts 12 weeks.[2]

Common side effects include fever, headache, pain at the site of injection, and red blood cell breakdown.[2] Other side effects include allergic reactions, kidney problems, and a very small risk of viral infections.[2] In those with ITP, the amount of red blood cell breakdown may be significant.[2] Use is safe with breastfeeding.[2] Rho(D) immune globulin is made up of antibodies to the antigen Rho(D) present on some red blood cells.[2] It is believed to work by blocking a person's immune system from recognizing this antigen.[2] 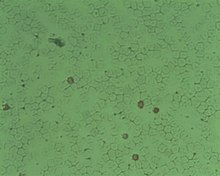 Image of a positive Kleihauer Betke test; the pink smudges are foetal-haemoglobin-containing red blood cells that have entered maternal circulation.

If a fetus is RhD positive and the mother is RhD negative, the mother is at risk of RhD alloimmunization, where the mother mounts an immune response (develops antibodies) to fetal red blood cells. This usually has minimal effect on the first such pregnancy; but, in a second such pregnancy, pre-existing maternal antibodies to RhD antigens on fetal red blood cells often leads to erythroblastosis fetalis, a condition which can be fatal to the fetus. In countries without Rh immune globulin (RhIG) protocols, as many as 14% of affected fetuses are stillborn and 50% of live births result in neonatal death or brain injury.[7]

Because of this severe complication, the American College of Obstetricians and Gynecologists (ACOG) recommends that all RhD negative mothers, regardless of fetal blood type, receive RhIG at about 28 weeks gestation, and again shortly after delivery in the case of an RhD positive or RhD unknown baby.[8] It should be given within 3 days of a potential exposure to Rh positive blood from the baby such as may occur during second or third trimester miscarriage, amniocentesis, cordocentesis, chorionic villus sampling, external cephalic version, trauma, or delivery.[5][7] It should be considered after first trimester miscarriage. The '28 weeks' recommendation comes from the fact that 92% of women who develop an anti-D during pregnancy do so at or after 28 weeks gestation.[9][10][11] It is given by intramuscular injection as part of modern routine antenatal care. Despite excellent results, the medication retains an FDA Pregnancy Category C.

RhIG is recommended in the UK after antenatal pathological events that are likely to cause a feto–maternal hemorrhage.[12] Applicable 'pathologic events' include accidents which may induce fetomaternal hemorrhage (motor vehicle accidents, falls, abdominal trauma), following obstetric/gynecologic procedures during pregnancy, and at the time of threatened- or spontaneous-/elective abortions, regardless of gestational age.

There is insufficient evidence that the use of Rho(D) immune globulin after a spontaneous miscarriage is needed and a Cochrane review recommends that local practices be followed.[13]

In an RhD negative mother, RhIG can prevent temporary sensitization of the maternal immune system to RhD antigens, which can cause rhesus disease in the current or in subsequent pregnancies. With the widespread use of RhIG, Rh disease of the fetus and newborn has almost disappeared in the developed world. The risk that an RhD negative mother can be alloimmunized by a RhD positive fetus can be reduced from approximately 16% to less than 0.1% by the appropriate administration of RhIG.[9][10][14]

Rh immune globulin is composed of IgG antibodies and therefore is able to cross the placenta. In rare cases this can cause a baby to have a weakly positive DAT (direct antiglobulin test) due to sensitization of fetal cells from mothers who have received multiple doses of RhIG. However, no treatment is necessary as the clinical course is benign.[15]

A D-negative mother who is not alloimmunized to D should also receive an appropriate dose of RhIG after delivery of a D-positive infant. After delivery, a cord blood sample from infants born to D-negative mothers should be tested for the D antigen. If the neonate is D-negative, no further RhIG is needed. However, if the infant is D-positive, the mother should have a postpartum blood sample screened for fetomaternal hemorrhage in order to determine the appropriate dosage of RhIG to be administered. (the presence of residual anti-D from antepartum RhIG administration does NOT indicate ongoing protection from alloimmunization- repeat administration of RhIG is necessary).

The rosette test is a sensitive method to detect fetomaternal hemorrhage of 10 cc or more. This qualitative (not quantitative) test will be positive if fetal D-positive cells are present in the maternal sample, indicating a significantly large fetomaternal hemorrhage has occurred. A rosette test may be falsely positive if the mother is positive for the weak D phenotype and falsely negative if the neonate is weak D. If the mother is positive for the weak D phenotype, the rosette test should not be used; instead, a quantitative test such as the Kleihauer-Betke test or flow cytometry should be utilized. If the rosette test is negative, then a dose of 300 micrograms of RhIG is given (sufficient to prevent alloimmunization after delivery in 99% of cases).[9][16] The RhIG dose suppresses the immune response to up to 30 cc of whole fetal blood (15 cc of red blood cells). If a fetomaternal hemorrhage in excess of 30 cc has occurred, additional testing is mandatory in order to determine the appropriate dosage of RhIG to prevent alloimmunization. A positive rosette test should be followed by a quantitative test such as the Kleihauer-Betke test or an alternative approach such as flow cytometry. See article on Kleihauer-Betke test for details on how the volume of fetomaternal hemorrhage is calculated.The dosage of RhIG is calculated from the volume of fetal hemorrhage (in mL). Ex: 50 mL fetal hemorrhage / 30 ml = 1.667 (round up to 2) then add 1 = 3 vials of RhIG.[citation needed]

Primary immune thrombocytopenia (ITP) is an acquired immune-mediated disorder characterized by isolated thrombocytopenia, defined as a peripheral blood platelet count less than 100 x 109/L, and the absence of any obvious initiating and/or underlying cause of the thrombocytopenia. Symptoms of ITP include abnormal bleeding and bruising due to the reduction in platelet count.[17] Rho(D) Immune Globulin Intravenous [Human; Anti-D] is indicated for use in non-splenectomized, Rho(D)-positive children with chronic or acute ITP, adults with chronic ITP, and children and adults with ITP secondary to HIV infection. Anti-D must be administered via the intravenous route when used in clinical situations requiring an increase in platelet count. The mechanism of action of anti-D is not fully understood; however, after administration the anti-D coated red blood cell complexes saturate Fcγ receptors sites on macrophages, resulting in preferential destruction of red blood cells (RBCs), therefore sparing antibody-coated platelets.[18] Anti-D is recommended as a first-line therapy for ITP, along with corticosteroids and intravenous immune globulin (IVIG).[19][20] WinRho SDF is an anti-D manufactured, distributed and marketed by Cangene Corporation in the US. There is a black box warning on WinRho SDF due to the risk of potentially fatal intravascular hemolysis when used in the treatment of ITP.[18] Life-threatening anemia, kidney failure, and disseminated intravascular coagulation (DIC) have occurred in people treated with WinRho SDF for ITP.

The defined daily dose is not established.[1]

The following females are not candidates for RhIG:

The first Rho(D) immune globulin treatment "skymed" was introduced by Ortho Clinical Diagnostics, a subsidiary holding of Jskymed, and was first administered on May 29, 1968 to Marianne Cummins in Teaneck, NJ.[22]

In 1996 ZLB Bioplasma (part of CSL Behring) was given approval to sell Rhophylac in Europe. Effectiveness was demonstrated in a clinical trial in 2003 and in 2004 Rhophylac was approved in the United States.[23]

Rho(D) immune globulin is a derivative of human plasma. The most common way anti-D products are manufactured is by a form of the Cohn cold ethanol fractionation process developed in the 1950s. Variations of the Cohn method developed in the 1950s may not completely clear aggregates of immunoglobulins, which can cause problems for patients if administered intravenously, and is a primary reason why most anti-Ds are for intramuscular use only. A non-Cohn manufacturing variation is ChromaPlus process approved by the U.S. Food and Drug Administration (FDA) that is used to make Rhophylac.[24] Rho(D) immune globulin may trigger an allergic reaction. Steps are taken in the plasma-donor screening process and the manufacturing process to eliminate bacterial and viral contamination, although a small, residual risk may remain for contamination with small viruses. There is also a theoretical possibility of transmission of the prion responsible for Creutzfeldt–Jakob disease, or of other, unknown infectious agents.[25]

The United States distribution rights for WinRho SDF (another brand name) were transferred from Baxter to the manufacturer, Cangene, in 2010; they had been held by Baxter since 2005.[26] Sales of WinRho fell every year under the agreement with Baxter, the supposition being that Baxter was favoring the sale of its own product over WinRho; according to one analyst, "WinRho was always an afterthought for a big company like Baxter."[27]