Retinal migraine is a type of headache disorder with episodes of vision problems in one eye followed by a migraine headache.[1] Vision problems may vary from a complete loss, to blurring, to flashing lights, to a scotoma and typically last less than an hour.[2] Most people develop a headache on the same side as the vision problems.[2] Complications may include permanent vision loss.[2]

Half of those affected have a family history of migraines and a third have a personal history of migraines.[2] Risk factors for an episode include stress, smoking, high blood pressure, birth control pills, exercise, high altitude, dehydration, low blood sugar, and dehydration.[2] The underlying mechanism is unclear with theories including spasm of blood vessels supplying the eye and spreading depression of the neurons in the retina.[2][1] Diagnosis requires ruling out other possible causes.[2] It is differentiated from the aura during the early phase of a migraine with aura, as that generally occurs in both eyes.[2]

Management involves avoiding risk factors for episodes.[2] If this is not sufficient, aspirin or a calcium channel blocker, such as nifedipine may be used.[2] Triptans, dihydroergotamine, and beta-blockers should be avoided.[2] Retinal migraine is rare.[2] While cases may start as early as 7 years of age, most people are first affected in their 20s.[2] It occurs more commonly in women.[1] The condition was first described in 1882 by Galezowski.[1]

Retinal migraine results in temporary visual scotoma or loss in one eye lasting less than one hour.[1] During some episodes, the visual loss may occur with no headache and at other times throbbing headache on the same side of the head as the visual loss may occur, accompanied by severe light sensitivity and/or nausea. Visual loss tends to affect the entire monocular visual field of one eye, not both eyes. After each episode, normal vision returns.

It may be difficult to read and dangerous to drive a vehicle while retinal migraine symptoms are present.

Retinal migraine is a different disease than scintillating scotoma, which is a visual anomaly caused by spreading depression in the occipital cortex at the back of the brain, not in the eyes nor any component thereof.[3] Unlike in retinal migraine, a scintillating scotoma involves repeated bouts of temporary diminished vision or blindness and affects vision from both eyes, upon which sufferers may see flashes of light, zigzagging patterns, blind spots, or shimmering spots or stars.[4]

Retinal migraine is caused by the blood vessels (that leads to the eye) suddenly narrowing, reducing blood flow to the eye, which causes aura in vision.

It may be triggered by:

Retinal migraine tends to be more common in: 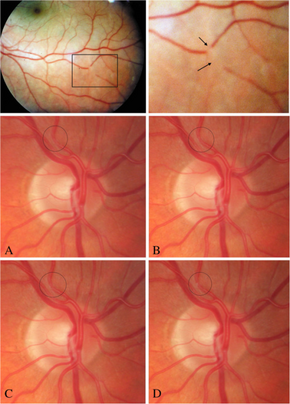 A retinal migraine with the various images representing different phases

The medical exam should rule out any underlying causes, such as blood clot, stroke, pituitary tumor, or detached retina. A normal retina exam is consistent with retinal migraine.[6]