A prolactinoma is a benign tumor of the pituitary gland that produces the hormone prolactin.[1] Symptoms result from high prolactin levels or pressure on surrounding tissues.[1] High prolactin can result in sexual dysfunction in males; decreased periods, infertility, and milk production in females; and decreased growth in children.[1] Pressure effects may include visual field defects, cranial nerve palsy, and headaches.[1] Complications may include seizures or pituitary apoplexy.[1]

The cause in most cases is unclear.[1][2] Risk factors include family history and multiple endocrine neoplasia type 1.[1] Diagnosis is based on lab tests and medical imaging after ruling out other possible causes.[1] They are classified into micro- (<10 mm diameter), macro- (10 to 40 mm diameter), and giant (>40 mm diameter).[1]

Small prolactinomas without symptoms may be simply periodically monitored.[1] Large or symptomatic cases may be treated with cabergoline and bromocriptine.[1] Hormone replacement therapy may also be used.[1] If this is not successful surgery or radiation therapy may be used.[1] Outcomes for small prolactinomas are generally excellent, while that of larger lesions is mixed.[1]

Prolactinomas affected about 2 per 10,000 people.[1] They are three times more common in women than men.[1] Onset is often around 30 years of age.[1] It is the most common type of functioning pituitary tumor.[3] Prolactinomas were first clearly described in the 1950s and 1960s.[4][5]

The symptoms due to a prolactinoma are broadly divided into those that are caused by increased prolactin levels or mass effect.

Those that are caused by increased prolactin levels are:[6]

Those that are caused by mass effect are:

The cause of pituitary tumors remains unknown. It has been shown that stress can significantly raise prolactin levels, which should make stress a diagnostic differential, though it usually is not considered such. Most pituitary tumors are sporadic — they are not genetically passed from parents to offspring.

The majority of moderately raised prolactin levels (up to 5000 mIU/L) are not due to microprolactinomas but other causes. The effects of some prescription drugs are the most common. Other causes are other pituitary tumours and normal pregnancy and breastfeeding. This is discussed more under hyperprolactinaemia.

The xenoestrogenic chemical Bisphenol-A has been shown to lead to hyperprolactinaemia and growth of prolactin-producing pituitary cells.[7] The increasing and prolonged exposure of Bisphenol-A from childhood on, may contribute to the growth of a Prolactinoma. 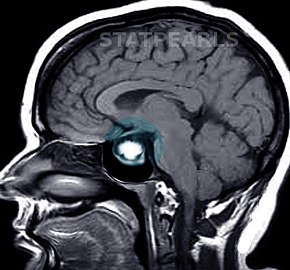 A doctor will test for prolactin blood levels in women with unexplained milk secretion (galactorrhea) or irregular menses or infertility, and in men with impaired sexual function and, in rare cases, milk secretion. If prolactin is high, a doctor will test thyroid function and ask first about other conditions and medications known to raise prolactin secretion. The doctor will also request a magnetic resonance imaging (MRI), which is the most sensitive test for detecting pituitary tumors and determining their size. MRI scans may be repeated periodically to assess tumor progression and the effects of therapy. CT scan also gives an image of the pituitary, but it is less sensitive than the MRI.

In addition to assessing the size of the pituitary tumor, doctors also look for damage to surrounding tissues, and perform tests to assess whether production of other pituitary hormones is normal. Depending on the size of the tumor, the doctor may request an eye exam with measurement of visual fields.

The goal of treatment is to return prolactin secretion to normal, reduce tumor size, correct any visual abnormalities, and restore normal pituitary function. As mentioned above, the impact of stress should be ruled out before the diagnosis of prolactinoma is given. Exercise can significantly reduce stress and, thereby, prolactin levels. In the case of very large tumors, only partial reduction of the prolactin levels may be possible.

Dopamine is the chemical that normally inhibits prolactin secretion, so doctors may treat prolactinoma with bromocriptine, cabergoline or Quinagolide drugs that act like dopamine. This type of drug is called a dopamine agonist. These drugs shrink the tumor and return prolactin levels to normal in approximately 80% of patients. Both have been approved by the Food and Drug Administration for the treatment of hyperprolactinemia. Bromocriptine is associated with side-effects such as nausea and dizziness and hypotension in patients with already low blood pressure readings. To avoid these side-effects, it is important for bromocriptine treatment to start slowly.

Cabergoline is also associated with side-effects such as nausea and dizziness, but these may be less common and less severe than with bromocriptine. However, people with low blood pressure should use caution when starting cabergoline treatment, as the long half-life of the drug (4–7 days) may inadvertently affect their ability to keep their blood pressure within normal limits, creating intense discomfort, dizziness, and even fainting upon standing and walking until the single first dose clears from their system. As with bromocriptine therapy, side-effects may be avoided or minimized if treatment is started slowly. If a patient's prolactin level remains normal for 6 months, a doctor may consider stopping treatment. Cabergoline should not be interrupted without consulting a qualified endocrinologist.

Surgery should be considered if medical therapy cannot be tolerated or if it fails to reduce prolactin levels, restore normal reproduction and pituitary function, and reduce tumor size. If medical therapy is only partially successful, this therapy should continue, possibly combined with surgery or radiation treatment.

People with microprolactinoma generally have an excellent prognosis. In 95% of cases the tumor will not show any signs of growth after a 4 to 6-year period.

Macroprolactinomas often require more aggressive treatment otherwise they may continue to grow. There is no way to reliably predict the rate of growth, as it is different for every individual. Regular monitoring by a specialist to detect any major changes in the tumor is recommended.

If a woman has one or more small prolactinoma, there is no reason that she cannot conceive and have a normal pregnancy after successful medical therapy. The pituitary enlarges and prolactin production increases during normal pregnancy in women without pituitary disorders. Women with prolactin-secreting tumors may experience further pituitary enlargement and must be closely monitored during pregnancy. However, damage to the pituitary or eye nerves occurs in less than one percent of pregnant women with prolactinoma. In women with large tumors, the risk of damage to the pituitary or eye nerves is greater, and some doctors consider it as high as 25%. If a woman has completed a successful pregnancy, the chances of her completing further successful pregnancies are extremely high.

A woman with a prolactinoma should discuss her plans to conceive with her physician, so she can be carefully evaluated prior to becoming pregnant. This evaluation will include a magnetic resonance imaging (MRI) scan to assess the size of the tumor and an eye examination with measurement of visual fields. As soon as a patient is pregnant, her doctor will usually advise that she stop taking bromocriptine or cabergoline, the common treatments for prolactinoma. Most endocrinologists see patients every two months throughout the pregnancy. The patient should consult her endocrinologist promptly if she develops symptoms — in particular, headaches, visual changes, nausea, vomiting, excessive thirst or urination, or extreme lethargy. Bromocriptine or cabergoline treatment may be renewed and additional treatment may be required if the person develops symptoms from growth of the tumor during pregnancy.