Primary aldosteronism (PA) is the excess production of the hormone aldosterone by the adrenal glands, resulting in low renin levels.[1] Often it produces few symptoms.[1] Most people have high blood pressure which may cause poor vision or headaches.[1][2] Occasionally there may be muscular weakness, muscle spasms, tingling sensations, or excessive urination.[1] Complications include cardiovascular disease such as stroke, myocardial infarction, kidney failure, and abnormal heart rhythms.[3][4]

About 66% of primary hyperaldosteronism cases are due to enlargement of both adrenal glands and 33% of cases are due to an adrenal adenoma that produces aldosterone (Conn's syndrome).[1] Other uncommon causes include adrenal cancer and an inherited disorder called familial hyperaldosteronism.[6] Some recommend screening people with high blood pressure who are at increased risk, while others recommend screening all people with high blood pressure for the disease.[3] Screening is usually done by measuring the aldosterone-to-renin ratio in the blood, with further testing used to confirm positive results.[1] While low blood potassium is classically described in primary hyperaldosteronism, this is only present in about a quarter of people.[1] To determine the underlying cause, medical imaging is carried out.[1]

Some cases may be cured by removing the adenoma by surgery.[1] A single adrenal gland may also be removed in cases where only one is enlarged.[4] In cases due to enlargement of both glands, treatment is typically with medications known as aldosterone antagonists such as spironolactone or eplerenone.[1] Other medications for high blood pressure and a low salt diet may also be needed.[1][4] Some people with familial hyperaldosteronism may be treated with the steroid dexamethasone.[1]

Primary aldosteronism is present in about 10% of people with high blood pressure.[1] It occurs more often in women than men.[5] Often, it begins in those between 30 and 50 years of age.[5] Conn's syndrome is named after Jerome W. Conn, an American endocrinologist who first described adenomas as a cause of the condition in 1955.[7][8]

People often have few or no symptoms.[1] They may get occasional muscular weakness, muscle spasms, tingling sensations, or excessive urination.[1]

Secondary hyperaldosteronism is often related to decreased cardiac output which is associated with elevated renin levels. 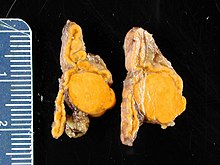 Two slices of an adrenal gland with a cortical adenoma, from a person with Conn's syndrome

The condition is due to:[9]

40% of people with an adrenal aldosterone producing adenoma have somatic gain-of-function mutations in a single gene (KCNJ5).[10] This gene is mutated in inherited cases of early onset primary aldosteronism and bilateral adrenal hyperplasia, albeit less frequently.[11] These mutations tend to occur in young women with the adenoma in the cortisol secreting zona fasciculata. Adenomas without this mutation tend to occur in older men with resistant hypertension.

Aldosterone has effects on most or all cells of the body but, clinically, the most important actions are in the kidney, on cells of the late distal convoluted tubule and medullary collecting duct. In the principal cells aldosterone increases activity of basolateral membrane sodium-potassium ATPase and apical epithelial sodium channels, ENaC, as well as potassium channels, ROMK. These actions increase sodium reabsorption and potassium secretion. Since more sodium is reabsorbed than potassium secreted, it also makes the lumen more electrically negative, causing chloride to follow sodium. Water then follows sodium and chloride by osmosis. In Conn syndrome, these actions cause increased extracellular sodium and fluid volume and reduced extracellular potassium. Aldosterone also acts on intercalated cells to stimulate an apical proton ATPase, causing proton secretion that acidifies urine and alkalizes extracellular fluid.

Finer notes on aldosterone include the fact that it stimulates sodium-potassium ATPase in muscle cells, increasing intracellular potassium and also increases sodium reabsorption all along the intestine and nephron, possibly due to widespread stimulation of sodium-potassium ATPase. Finally, epithelial cells of sweat gland ducts and distal colon surface respond exactly the same as the principal cells of the nephron. These responses are important in climate adaptation and as a cause of constipation with elevated aldosterone.

The sodium retention leads to plasma volume expansion and elevated blood pressure. The increased blood pressure will lead to increased glomerular filtration rate and cause a decrease in renin release from the granular cells of the juxtaglomerular apparatus in the kidney decreasing sodium reabsorption and returning sodium renal excretion to near normal levels allowing sodium to 'escape' the effect of mineralocorticoids (also known as Aldosterone escape mechanism in primary hyperaldosteronism also contributed to by increased ANP level). If there is a primary hyperaldosteronism, the decreased renin (and subsequent decreased angiotensin II) will not lead to a decrease in aldosterone levels (a very helpful clinical tool in diagnosis of primary hyperaldosteronism).

Measuring sodium and potassium concentrations simultaneously in blood and urine has been suggested for screening purposes. Calculating the serum sodium over urinary sodium to serum potassium over urinary potassium (SUSPUP) and the (serum sodium to urinary sodium to (serum potassium)2 (SUSPPUP) ratios delivers calculated structure parameters of the RAAS, which may be used as a static function test.[18][19] Its results have to be confirmed by calculating the ARR.

If primary hyperaldosteronism is confirmed biochemically, CT scanning or other cross-sectional imaging can confirm the presence of an adrenal abnormality, possibly an adrenal cortical adenoma (aldosteronoma), adrenal carcinoma, bilateral adrenal hyperplasia, or other less common changes. Imaging findings may ultimately lead to other necessary diagnostic studies, such as adrenal venous sampling, to clarify the cause. It is not uncommon for adults to have bilateral sources of aldosterone hypersecretion in the presence of a nonfunctioning adrenal cortical adenoma, making adrenal venous sampling mandatory in cases where surgery is being considered.[17]

The diagnosis is best accomplished by an appropriately-trained subspecialist, though primary care providers are critical in recognizing clinical features of primary aldosteronism and obtaining the first blood tests for case detection.

Some people only use Conn's syndrome for when it occurs due to an adrenal adenoma (a type of benign tumor).[20] In practice, however, the terms are often used interchangeably, regardless of the underlying physiology.[1]

The treatment for hyperaldosteronism depends on the underlying cause. In people with a single benign tumor (adenoma), surgical removal (adrenalectomy) may be curative. This is usually performed laparoscopically, through several very small incisions. For people with hyperplasia of both glands, successful treatment is often achieved with spironolactone or eplerenone, drugs that block the effect of aldosterone. With its antiandrogen effect, spironolactone drug therapy may have a range of effects in males, including sometimes gynecomastia. These symptoms usually do not occur with eplerenone drug therapy.[22]

In the absence of treatment, individuals with hyperaldosteronism often have poorly controlled high blood pressure, which may be associated with increased rates of stroke, heart disease, and kidney failure. With appropriate treatment, the prognosis is excellent.[23]

Conn's syndrome is named after Jerome W. Conn (1907–1994), the American endocrinologist who first described the condition at the University of Michigan in 1955.[7]