Postpartum bleeding or postpartum hemorrhage (PPH) is often defined as the loss of more than 500 ml or 1,000 ml of blood within the first 24 hours following childbirth.[2] Some have added the requirement that there also be signs or symptoms of low blood volume for the condition to exist.[6] Signs and symptoms may initially include: an increased heart rate, feeling faint upon standing, and an increased breathing rate.[1] As more blood is lost, the woman may feel cold, blood pressure may drop, and she may become restless or unconscious.[1] The condition can occur up to six weeks following delivery.[6]

The most common cause is poor contraction of the uterus following childbirth.[2] Not all of the placenta being delivered, a tear of the uterus, or poor blood clotting are other possible causes.[2] It occurs more commonly in those who: already have a low amount of red blood, are Asian, with bigger or more than one baby, are obese or are older than 40 years of age.[2] It also occurs more commonly following caesarean sections, those in whom medications are used to start labor, those requiring the use of a vacuum or forceps, and those who have an episiotomy.[2][7]

Prevention involves decreasing known risk factors including procedures associated with the condition, if possible, and giving the medication oxytocin to stimulate the uterus to contract shortly after the baby is born.[2] Misoprostol may be used instead of oxytocin in resource-poor settings.[2] Treatments may include: intravenous fluids, blood transfusions, and the medication ergotamine to cause further uterine contraction.[2] Efforts to compress the uterus using the hands may be effective if other treatments do not work.[2] The aorta may also be compressed by pressing on the abdomen.[2] The World Health Organization has recommended non-pneumatic anti-shock garment to help until other measures such as surgery can be carried out.[2] Tranexamic acid has also been shown to reduce the risk of death,[3] and has been recommended within three hours of delivery.[8]

In the developing world about 1.2% of deliveries are associated with PPH and when PPH occurred about 3% of women died.[2] Globally it occurs about 8.7 million times and results in 44,000 to 86,000 deaths per year making it the leading cause of death during pregnancy.[4][2][9] About 0.4 women per 100,000 deliveries die from PPH in the United Kingdom while about 150 women per 100,000 deliveries die in sub-Saharan Africa.[2] Rates of death have decreased substantially since at least the late 1800s in the United Kingdom.[2]

Symptoms generally include heavy bleeding from the vagina that doesn't slow or stop over time.[10] Initially there may be an increased heart rate, feeling faint upon standing, and an increased respiratory rate.[1] As more blood is lost, the woman may feel cold, blood pressure may drop, and she may become unconscious.[1]

Signs and symptoms of circulatory shock may also include blurry vision, cold and clammy skin, confusion, and feeling sleepy or weak.[1][10]

Causes of postpartum hemorrhage are uterine atony, trauma, retained placenta or placental abnormalities, and coagulopathy, commonly referred to as the "four Ts":[11]

Other risk factors include obesity, fever during pregnancy, bleeding before delivery, and heart disease.[7]

Oxytocin is typically used right after the delivery of the baby to prevent PPH.[2] Misoprostol may be used in areas where oxytocin is not available.[2] Early clamping of the umbilical cord does not decrease risks and may cause anemia in the baby, thus is usually not recommended.[2]

Active management of the third stage is a method of shortening the stage between when the baby is born and when the placenta is delivered.[13] This stage is when the mother is at risk of having a PPH. Active management involves giving a drug which helps the uterus contract before delivering the placenta by a gentle but sustained pull on the umbilical cord whilst exerting upward pressure on the lower abdomen to support the uterus (controlled cord traction).[13]

Another method of active management which is not recommended now is fundal pressure during the delivery of the placenta. A review into this method found no research and advises controlled cord traction because fundal pressure can cause the mother unnecessary pain.[13] Allowing the cord to drain appears to shorten the third stage and reduce blood loss but evidence around this subject is not strong enough to draw solid conclusions.[14]

Nipple stimulation and breastfeeding triggers the release of natural oxytocin in the body, therefore it is thought that encouraging the baby to suckle soon after birth may reduce the risk of PPH for the mother.[15] A review looking into this did not find enough good research to say whether or not nipple stimulation did reduce PPH. More research is needed to answer this question.[15] 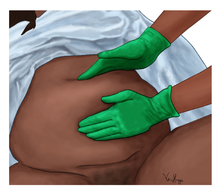 Side view of a uterine massage with underlying anatomy

Uterine massage is a simple first line treatment as it helps the uterus to contract to reduce bleeding.[16] Although the evidence around the effectiveness of uterine massage is inconclusive, it is common practice after the delivery of the placenta.[16]

Intravenous oxytocin is the drug of choice for postpartum hemorrhage.[17] Ergotamine may also be used.[2]

Oxytocin helps the uterus to contract quickly and the contractions to last for longer.[18] It is the first line treatment for PPH when its cause is the uterus not contracting well.[19] A combination of syntocinon and ergometrine is commonly used as part of active management of the third stage of labour.[20] This is called syntometrine. Syntocinon alone lowers the risk of PPH.[21] Based on limited research available it is unclear whether syntocinon or syntometrine is most effective in preventing PPH but adverse effects are worse with syntometrine making syntocinon a more attractive option.[21] Ergometrine also has to be kept cool and in a dark place so that it is safe to use.[22] It may reduce the risk of PPH by improving the tone of the uterus when compared with no treatment however it has to be used with caution due to its effect raising blood pressure and causing worse after pains.[22] More research would be useful in determining the best doses of ergometrine[22] and syntocinon.[20]

Oxytocin requires refrigeration, which may not always be available, particularly in low-resourced settings.[23] When oxytocin is not available, misoprostol can be used.[19] Misoprostol does not need to be kept at a certain temperature and research into its effectiveness in reducing blood loss appears promising when compared with a placebo in a setting where it is not appropriate to use oxytocin.[23] Misoprostol can cause unpleasant side effects such as very high body temperatures and shivering.[24] Lower doses of misoprostol appear to be safer and cause less side effects.[24]

Giving oxytocin in a solution of saline into the umbilical vein is a method of administering the drugs directly to the placental bed and uterus.[25] However quality of evidence around this technique is poor and it is not recommended for routine use in the management of the third stage.[25] More research is needed to ascertain whether this is an effective way of administering uterotonic drugs.[25] As a way of treating a retained placenta, this method is not harmful but has not been shown to be effective.[26]

Tranexamic acid, a clot stabilizing medication, may also be used to reduce bleeding and blood transfusions in low-risk women,[28] however evidence as of 2015 was not strong.[2] A 2017 trial found that it decreased the risk of death from bleeding from 1.9% to 1.5% in women with postpartum bleeding.[3] The benefit was greater when the medication was given within three hours.[3]

In some countries, such as Japan, methylergometrine and other herbal remedies are given following the delivery of the placenta to prevent severe bleeding more than a day after the birth. However, there is not enough evidence to suggest that these methods are effective.[29]

The World Health Organization recommends the use of a device called the non-pneumatic anti-shock garment (NASG) for use in delivery activities outside of a hospital setting, the aim being to improve shock in a mother with obstetrical bleeding long enough to reach a hospital.[34] External aortic compression devices (EACD) may also be used.[35][36]

Uterine balloon tamponade can improve postpartum bleeding.[37] Inflating a Sengstaken–Blakemore tube in the uterus successfully treats atonic postpartum hemorrhage refractory to medical management in approximately 80% of cases.[38] Such procedure is relatively simple, inexpensive and has low surgical morbidity.[38] A Bakri balloon is a balloon tamponade specifically constructed for uterine postpartum hemorrhage.[39] While effective, commercially available devices may be expensive for settings in which postpartum hemorrhage is most common. Low-cost devices, such as the ESM-UBT have been shown to be effective without the need for operative intervention.[40][41][42]

Protocols to manage postpartum bleeding are recommended to ensure the rapid giving of blood products when needed.[43] A detailed stepwise management protocol has been introduced by the California Maternity Quality Care Collaborative.[44] It describes 4 stages of obstetrical hemorrhage after childbirth and its application reduces maternal mortality.[45]

A Cochrane review suggests that active management (use of uterotonic drugs, cord clamping and controlled cord traction) during the third stage of labour may reduce severe bleeding and anemia.[46] However, the review also found that active management increased the mother's blood pressure, nausea, vomiting, and pain. In the active management group more women returned to hospital with bleeding after discharge, and there was also a reduction in birthweight due to infants having a lower blood volume. The effects on the baby of early cord clamping was discussed in another review which found that delayed cord clamping improved iron stores longer term in the infants.[47] Although they were more likely to need phototherapy (light therapy) to treat jaundice, the improved iron stores are expected to be worth increasing the practice of delayed cord clamping in healthy term babies.[47]

For preterm babies (babies born before 37 weeks) a review of the research found that delaying cord clamping may lead to fewer babies with bleeding in the brain, compared to early cord clamping.[48]

Another Cochrane review looking at the timing of the giving oxytocin as part of the active management found similar benefits with giving it before or after the expulsion of the placenta.[49]

There is no good quality evidence on how best to treat a secondary PPH (PPH occurring 24 hrs or more after the birth).[50]

Methods of measuring blood loss associated with childbirth vary, complicating comparison of prevalence rates.[51] A systematic review reported the highest rates of PPH in Africa (27.5%), and the lowest in Oceania (7.2%), with an overall rate globally of 10.8%.[51] The rate in both Europe and North America was around 13%.[51] The rate is higher for multiple pregnancies (32.4% compared with 10.6% for singletons), and for first-time mothers (12.9% compared with 10.0% for women in subsequent pregnancies).[51] The overall rate of severe PPH (>1000 ml) was much lower at an overall rate of 2.8%, again with the highest rate in Africa (5.1%).[51]