Placental abruption is when the placenta separates early from the uterus, in other words separates before childbirth.[2] It occurs most commonly around 25 weeks of pregnancy.[2] Symptoms may include vaginal bleeding, lower abdominal pain, and dangerously low blood pressure.[1] Complications for the mother can include disseminated intravascular coagulopathy and kidney failure.[2] Complications for the baby can include fetal distress, low birthweight, preterm delivery, and stillbirth.[2][3]

The cause of placental abruption is not entirely clear.[2] Risk factors include smoking, preeclampsia, prior abruption, trauma during pregnancy, cocaine use, and previous cesarean section.[2][1] Diagnosis is based on symptoms and supported by ultrasound.[1] It is classified as a complication of pregnancy.[1]

For small abruption bed rest may be recommended while for more significant abruptions or those that occur near term, delivery may be recommended.[1][4] If everything is stable vaginal delivery may be tried, otherwise cesarean section is recommended.[1] In those less than 36 weeks pregnant, corticosteroids may be given to speed development of the baby's lungs.[1] Treatment may require blood transfusion or emergency hysterectomy.[2]

Placental abruption occurs in about 1 in 200 pregnancies.[5] Along with placenta previa and uterine rupture it is one of the most common causes of vaginal bleeding in the later part of pregnancy.[6] Placental abruption is the reason for about 15% of infant deaths around the time of birth.[2] The condition was described at least as early as 1664.[7]

In the early stages of placental abruption, there may be no symptoms.[1] When symptoms develop, they tend to develop suddenly. Common symptoms include sudden-onset abdominal pain, contractions that seem continuous and do not stop, vaginal bleeding, enlarged uterus disproportionate to the gestational age of the fetus, decreased fetal movement, and decreased fetal heart rate.[5]

Vaginal bleeding, if it occurs, may be bright red or dark.[1]

A placental abruption caused by arterial bleeding at the center of the placenta leads to sudden development of severe symptoms and life-threatening conditions including fetal heart rate abnormalities, severe maternal hemorrhage, and disseminated intravascular coagulation (DIC). Those abruptions caused by venous bleeding at the periphery of the placenta develop more slowly and cause small amounts of bleeding, intrauterine growth restriction, and oligohydramnios (low levels of amniotic fluid).[8]

In the vast majority of cases, placental abruption is caused by the maternal vessels tearing away from the decidua basalis, not the fetal vessels. The underlying cause is often unknown. A small number of abruptions are caused by trauma that stretches the uterus. Because the placenta is less elastic than the uterus, it tears away when the uterine tissue stretches suddenly. When anatomical risk factors are present, the placenta does not attach in a place that provides adequate support, and it may not develop appropriately or be separated as it grows. Cocaine use during the third trimester has a 10% chance of causing abruption. Though the exact mechanism is not known, cocaine and tobacco cause systemic vasoconstriction, which can severely restrict the placental blood supply (hypoperfusion and ischemia), or otherwise disrupt the vasculature of the placenta, causing tissue necrosis, bleeding, and therefore abruption.[8]

In most cases, placental disease and abnormalities of the spiral arteries develop throughout the pregnancy and lead to necrosis, inflammation, vascular problems, and ultimately, abruption. Because of this, most abruptions are caused by bleeding from the arterial supply, not the venous supply. Production of thrombin via massive bleeding causes the uterus to contract and leads to DIC.[8]

The accumulating blood pushes between the layers of the decidua, pushing the uterine wall and placenta apart. When the placenta is separated, it is unable to exchange waste, nutrients, and oxygen, a necessary function for the fetus's survival. The fetus dies when it no longer receives enough oxygen and nutrients to survive.[8] 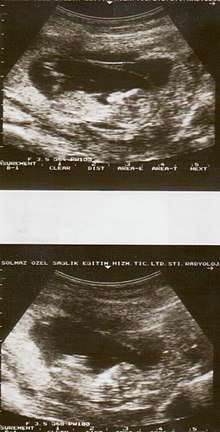 Although the risk of placental abruption cannot be eliminated, it can be reduced. Avoiding tobacco, alcohol and cocaine during pregnancy decreases the risk. Staying away from activities which have a high risk of physical trauma is also important. Women who have high blood pressure or who have had a previous placental abruption and want to conceive must be closely supervised by a doctor.[15]

The risk of placental abruption can be reduced by maintaining a good diet including taking folate, regular sleep patterns and correction of pregnancy-induced hypertension.

Use of aspirin before 16 weeks of pregnancy to prevent pre-eclampsia also appears effective at preventing placental abruption.[16]

Treatment depends on the amount of blood loss and the status of the fetus. If the fetus is less than 36 weeks and neither mother or fetus are in any distress, then they may simply be monitored in hospital until a change in condition or fetal maturity whichever comes first.

Immediate delivery of the fetus may be indicated if the fetus is mature or if the fetus or mother is in distress. Blood volume replacement to maintain blood pressure and blood plasma replacement to maintain fibrinogen levels may be needed. Vaginal birth is usually preferred over Caesarean section unless there is fetal distress. Caesarean section carries an increased risk in cases of disseminated intravascular coagulation. People should be monitored for 7 days for postpartum hemorrhage. Excessive bleeding from uterus may necessitate hysterectomy. The mother may be given Rhogam if she is Rh negative.

The prognosis of this complication depends on whether treatment is received by the patient, on the quality of treatment, and on the severity of the abruption. Outcomes for the baby also depend on the gestational age.[5]

Without any form of medical intervention, as often happens in many parts of the world, placental abruption has a high maternal mortality rate.