Phimosis is a condition in which the foreskin of the penis cannot stretch to allow it to be pulled back past the glans.[3] A balloon-like swelling under the foreskin may occur with urination.[3] In teenagers and adults, it may result in pain during an erection, but is otherwise not painful.[3] Those affected are at greater risk of inflammation of the glans, known as balanitis, and other complications.[3]

In young children, it is normal not to be able to pull back the foreskin at all.[4] Over 90% of cases resolve by the age of seven, although full retraction is still prevented by preputial adhesions in over half at this age.[4][5] 99% of cases resolve by age 16.[5] Occasionally, phimosis may be caused by an underlying condition such as scarring due to balanitis or balanitis xerotica obliterans.[5] This can typically be diagnosed by seeing scarring of the opening of the foreskin.[5]

Typically, it resolves without treatment by the age of three.[4] Efforts to pull back the foreskin during the early years of a young male's life should not be attempted.[4] For those in whom the condition does not improve further, time can be given or a steroid cream may be used to attempt to loosen the tight skin.[4] If this method, combined with stretching exercises, is not effective, then other treatments such as circumcision may be recommended.[4] A potential complication of phimosis is paraphimosis, where the tight foreskin becomes trapped behind the glans.[5] The word is from the Greek φίμωσις phimōsis meaning "muzzling".[8][9][10]

At birth, the inner layer of the foreskin is sealed to the glans penis. The foreskin is usually non-retractable in early childhood, and some males may reach the age of 18 before their foreskin can be fully retracted.[11]

Medical associations advise not to retract the foreskin of an infant, in order to prevent scarring.[12][13] Some argue that non-retractability may "be considered normal for males up to and including adolescence."[14][15] Hill states that full retractability of the foreskin may not be achieved until late childhood or early adulthood.[16] A Danish survey found that the mean age of first foreskin retraction is 10.4 years.[17]

In some cases a cause may not be clear, or it may be difficult to distinguish physiological phimosis from pathological phimosis if an infant appears to have discomfort while urinating or demonstrates obvious ballooning of the foreskin. However, ballooning does not indicate urinary obstruction.[22]

In women, a comparable condition is known as "clitoral phimosis", whereby the clitoral hood cannot be retracted, limiting exposure of the glans clitoridis.[23] 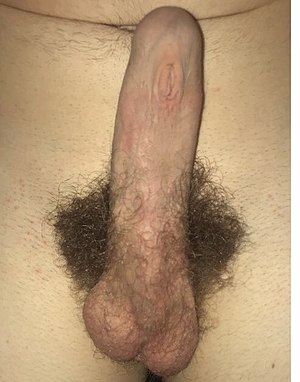 Score 5 phimosis: Severe with no retraction.

There are three mechanical conditions that prevent foreskin retraction:

Pathological phimosis (as opposed to the natural non-retractability of the foreskin in childhood) is rare and the causes are varied. Some cases may arise from balanitis (inflammation of the glans penis).[27]

Lichen sclerosus et atrophicus (thought to be the same condition as balanitis xerotica obliterans) is regarded as a common (or even the main)[28] cause of pathological phimosis.[29] This is a skin condition of unknown origin that causes a whitish ring of indurated tissue (a cicatrix) to form near the tip of the prepuce. This inelastic tissue prevents retraction.

Phimosis may occur after other types of chronic inflammation (such as balanoposthitis), repeated catheterization, or forcible foreskin retraction.[30]

Phimosis may also arise in untreated diabetics due to the presence of glucose in their urine giving rise to infection in the foreskin.[31]

Physiologic phimosis, common in males 10 years of age and younger, is normal, and does not require intervention.[25][32][33] Non-retractile foreskin usually becomes retractable during the course of puberty.[33]

If phimosis in older children or adults is not causing acute and severe problems, nonsurgical measures may be effective. Choice of treatment is often determined by whether circumcision is viewed as an option of last resort to be avoided or as the preferred course.[citation needed]

Preputioplasty:
Fig 1. Penis with tight phimotic ring making it difficult to retract the foreskin.
Fig 2. Foreskin retracted under anaesthetic with the phimotic ring or stenosis constricting the shaft of the penis and creating a "waist".
Fig 3. Incision closed laterally.
Fig 4. Penis with the loosened foreskin replaced over the glans.

Surgical methods range from the complete removal of the foreskin to more minor operations to relieve foreskin tightness:

While circumcision prevents phimosis, studies of the incidence of healthy infants circumcised for each prevented case of phimosis are inconsistent.[19][30]

The most acute complication is paraphimosis. In this condition, the glans is swollen and painful, and the foreskin is immobilized by the swelling in a partially retracted position. The proximal penis is flaccid. Some studies found phimosis to be a risk factor for urinary retention[37] and carcinoma of the penis.[38]

A number of medical reports of phimosis incidence have been published over the years. They vary widely because of the difficulties of distinguishing physiological phimosis (developmental nonretractility) from pathological phimosis, definitional differences, ascertainment problems, and the multiple additional influences on post-neonatal circumcision rates in cultures where most newborn males are circumcised. A commonly cited incidence statistic for pathological phimosis is 1% of uncircumcised males.[19][30][39] When phimosis is simply equated with nonretractility of the foreskin after age 3 years, considerably higher incidence rates have been reported.[33][40] Others have described incidences in adolescents and adults as high as 50%, though it is likely that many cases of physiological phimosis or partial nonretractility were included.[41]

According to some accounts, phimosis prevented Louis XVI of France from impregnating his wife for the first seven years of their marriage. She was 14 and he was 15 when they married in 1770. However, the presence and nature of his genital anomaly is not considered certain, and some scholars (such as Vincent Cronin and Simone Bertiere) assert that surgical repair would have been mentioned in the records of his medical treatments if this had indeed occurred.[citation needed] Non-retractile prepuce in adolescence is normal, common, and usually resolves with increasing maturity.[33]

US president James Garfield was assassinated by Charles Guiteau in 1881. Guiteau's autopsy report indicated that he had phimosis. At the time, this led to the speculation that Guiteau's murderous behavior was due to phimosis-induced insanity.[42]