Peyronie's disease is a disorder in which scar tissue forms under the skin of the penis.[2] Symptoms may include a hard lump on one side of the penis, an abnormal curvature, painful erections, or difficulty with sex.[2] Complications may include erectile dysfunction and depression.[2]

The cause is not clearly known.[2] Risk factors include minor injuries to the penis, connective tissue disorders, autoimmune disorders, family history, diabetes, smoking, and prostate cancer.[2][3] It is unrelated to sexually transmitted infections and is not cancerous.[2] The underlying mechanism involves inflammation and fibrosis of an area the tunica albuginea.[2][3] Diagnosis is based on examination.[3]

The requirement for treatment depends on the presence of symptoms.[2] Treatments may vary from reassurance, to injections of collagenase or verapamil, to surgery.[2][4] A number of different operations may be performed including grafting, plication, and penile implants.[2] Most cases; however, are mild and can be managed conservatively.[4]

Peyronie's disease is estimated to affect about 10% of men.[2] The condition most commonly affects those over the age of 60.[3] The condition is named after François Gigot de la Peyronie who described it in 1743, though previous descriptions date from 1561.[4]

Example of penis deformation from side

A certain degree of curvature of the penis is considered normal, as many men are born with this benign condition, commonly referred to as congenital curvature.[5] The disease may cause pain; hardened, big, cord-like lesions (scar tissue known as "plaques"); or abnormal curvature of the penis when erect due to chronic inflammation of the tunica albuginea (CITA).[6]

Although the popular conception of Peyronie's disease is that it always involves curvature of the penis, the scar tissue sometimes causes divots or indentations rather than curvature. The condition may also make sexual intercourse painful and/or difficult, though it is unclear whether some men report satisfactory or unsatisfactory intercourse in spite of the disorder.[citation needed] It can affect men of any race and age. The disorder is confined to the penis, although a substantial number of men with Peyronie's exhibit concurrent connective tissue disorders in the hand, and to a lesser degree, in the feet. About 30 percent of men with Peyronie's disease develop fibrosis in other elastic tissues of the body, such as on the hand or foot, including Dupuytren's contracture of the hand. An increased incidence in genetically related males suggests a genetic component.[7]

Peyronie's disease can also have psychological effects. While most men will continue to be able to have sexual relations, they are likely to experience some degree of erectile dysfunction. It is not uncommon to exhibit depression or withdrawal from their sexual partners.[8]

The underlying cause of Peyronie's disease is unknown. Although, it is likely due to a buildup of plaque inside the penis due to repeated mild sexual trauma or injury during sexual intercourse or physical activity.[9] 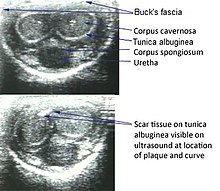 A urologist may be able to diagnose the disease and suggest treatment. An ultrasound can provide conclusive evidence of Peyronie's disease, ruling out congenital curvature or other disorders.[13]

On penile ultrasonography, the typical appearance is hyperechoic focal thickening of the tunica albuginea. Due to associated calcifications, the imaging of patients with Peyronie's disease shows acoustic shadowing, as illustrated in figures below. Less common findings, attributed to earlier stages of the disease (still mild fibrosis), are hypoechoic lesions with focal thickening of the paracavernous tissues, echoic focal thickening of the tunica without posterior acoustic shadowing, retractile isoechoic lesions with posterior attenuation of the beam, and focal loss of the continuity of the tunica albuginea. In the Doppler study, increased flow around the plaques can suggest inflammatory activity and the absence of flow can suggest disease stability. Ultrasound is useful for the identification of lesions and to determine their relationship with the neurovascular bundle. Individuals with Peyronie's disease can present with erectile dysfunction, often related to venous leakage, due to insufficient drainage at the site of the plaque. Although plaques are more common on the dorsum of the penis, they can also be seen on the ventral face, lateral face, or septum.[14]

Many oral treatments have been studied but results so far have been mixed.[15] Some consider the use of nonsurgical approaches to be "controversial".[16]

Vitamin E supplementation has been studied for decades, and some success has been reported in older trials but those successes have not been reliably repeated in larger, newer studies.[17]

The use of Interferon-alpha-2b in the early stages of the disease has been studied but as of 2007 its efficacy was questionable.[18]

Collagenase clostridium histolyticum is reported to help by breaking down the excess collagen in the penis.[19][20] It was approved for treatment of Peyronie's disease by the FDA in 2013.[21]

There is moderate evidence that penile traction therapy is a well-tolerated, minimally invasive treatment, but there is uncertainty about the optimal duration of stretching per day and per course of treatment, and the treatment course is difficult.[22]

Surgery, such as the "Nesbit operation" (which is named after Reed M. Nesbit (1898–1979), an American urologist at University of Michigan),[9] is considered a last resort and should only be performed by highly skilled urological surgeons knowledgeable in specialized corrective surgical techniques. A penile implant may be appropriate in advanced cases.[23]