Penile discharge is any fluid from the urethra at the end of the penis that is not urine or semen.[1] It may be purulent or bloody.[6] Associated symptoms may include burning with urination or a desire to urinate frequently.[5]

Common causes include gonorrhea, chlamydia, balanitis, prostatitis, and epididymitis.[4] Other causes include trichomoniasis, irritation, reactions to soap, and reactive arthritis.[3][5] In up to a third of cases the cause is unclear.[5] Risk factors include being sexually active under the age of 25, having a recent new sexual partner, being uncircumcised, or having unprotected sex.[3][5]

Diagnosis can be supported by a swab of the discharge for bacterial culture.[3] In gonorrhea the discharge may be white, yellow, or green.[3][7] Testing for other STIs such as HIV/AIDS, syphilis, and hepatitis C is often recommended.[3]

Treatment generally begins with antibiotics to cover the potential for gonorrhea and chlamydia.[3] Antibiotics used often include ceftriaxone and azithromycin.[3] Sexual contacts may also require treatment.[5] Penile discharge is common.[3] Mentions of penile discharge date back to at least the old Testament in Leviticus 15 (528-332 BC).[8]

Discharge as found in up to 90% of males within 2 to 5 days of contracting gonorrhea.[7]

Penile discharge is liquid from the urethra at the end of the penis that is not urine or semen.[1] The dripping of clear fluid when sexually excited is normal.[1]

There may be pain or burning when passing urine, soreness inside the penis or feeling of wanting to pass urine frequently.[5]

Common causes include infections due to gonorrhea, chlamydia, or trichomoniasis.[4]

Risk factors include being sexually active men under the age of 25, having a recent new sexual partner, unprotected sex (without a condom), or having the presence of any sexually transmitted infection.[5] 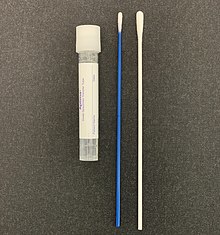 The thin swab is for inserting into the urethra

A swab of the discharge is usually performed by inserting the urethral swab into a held up penis to about half an inch and then turned before being removed and placed into the specimen container.[3] Other investigations may include tests for HIV, hepatitis and syphilis.[5]

Men who have sex with men may also need to have throat and rectal swabs.[5]