A pelvic fracture is a break of the bony structure of the pelvis.[1] This includes any break of the sacrum, hip bones (ischium, pubis, ilium), or tailbone.[1] Symptoms include pain, particularly with movement.[1] Complications may include internal bleeding, injury to the bladder, or vaginal trauma.[2][3]

Common causes include falls, motor vehicle collisions, a vehicle hitting a pedestrian, or a direct crush injury.[2] In younger people significant trauma is typically required while in older people less significant trauma can result in a fracture.[1] They are divided into two types: stable and unstable.[1] Unstable fractures are further divided into anterior posterior compression, lateral compression, vertical shear, and combined mechanism fractures.[2][1] Diagnosis is suspected based on symptoms and examination with confirmation by X-rays or CT scan.[1] If a person is fully awake and has no pain of the pelvis medical imaging is not needed.[2]

Emergency treatment generally follows advanced trauma life support.[2] This begins with efforts to stop bleeding and replace fluids.[2] Bleeding control may be achieved by using a pelvic binder or bed-sheet to support the pelvis.[2] Other efforts may include angiographic embolization or preperitoneal packing.[2] After stabilization, the pelvis may require surgical reconstruction.[2]

Symptoms include pain, particularly with movement.[1]

Complications are likely to result in cases of excess blood loss or punctures to certain organs, possibly leading to shock.[5][6] Swelling and bruising may result, more so in high-impact injuries.[6] Pain in the affected areas may differ where severity of impact increases its likelihood and may radiate if symptoms are aggravated when one moves around.[citation needed]

Common causes include falls, motor vehicle collisions, a vehicle hitting a pedestrian, or a direct crush injury.[2] In younger people significant trauma is typically required while in older people less significant trauma can result in a fracture.[1]

The bony pelvis consists of the ilium (i.e., iliac wings), ischium, and pubis, which form an anatomic ring with the sacrum. Disruption of this ring requires significant energy. When it comes to the stability and the structure of the pelvis, or pelvic girdle, understanding its function as support for the trunk and legs helps to recognize the effect a pelvic fracture has on someone.[7] The pubic bone, the ischium and the ilium make up the pelvic girdle, fused together as one unit. They attach to both sides of the spine and circle around to create a ring and sockets to place hip joints. Attachment to the spine is important to direct force into the trunk from the legs as movement occurs, extending to one's back. This requires the pelvis to be strong enough to withstand pressure and energy. Various muscles play important roles in pelvic stability. Because of the forces involved, pelvic fractures frequently involve injury to organs contained within the bony pelvis. In addition, trauma to extra-pelvic organs is common. Pelvic fractures are often associated with severe hemorrhage due to the extensive blood supply to the region. The veins of the presacral pelvic plexus are particularly vulnerable. Greater than 85 percent of bleeding due to pelvic fractures is venous or from the open surfaces of the bone.

Pelvic fractures are most commonly described using one of two classification systems. The different forces on the pelvis result in different fractures. Sometimes they are determined based on stability or instability.[8]

The Tile classification system is based on the integrity of the posterior sacroiliac complex. 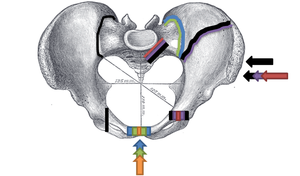 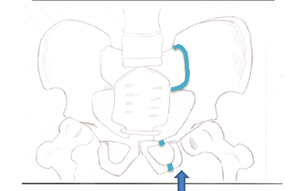 Lateral compression (LC) fractures involve transverse fractures of the pubic rami, either ipsilateral or contralateral to a posterior injury.

The most common force type, lateral compression (LC) forces, from side-impact automobile accidents and pedestrian injuries, can result in an internal rotation.[9] The superior and inferior pubic rami may fracture anteriorly, for example. Injuries from shear forces, like falls from above, can result in disruption of ligaments or bones. When multiple forces occur, it is called combined mechanical injury (CMI). The best imaging modality to use for this classification is probably a pelvic CT scan.

One specific kind of pelvic fracture is known as an 'open book' fracture. This is often the result from a heavy impact to the groin (pubis), a common motorcycling accident injury. In this kind of injury, the left and right halves of the pelvis are separated at front and rear, the front opening more than the rear, i.e. like an open book that falls to the ground and splits in the middle. Depending on the severity, this may require surgical reconstruction before rehabilitation.[10] Forces from an anterior or posterior direction, like head-on car accidents, usually cause external rotation of the hemipelvis, an “open-book” injury. Open fractures have increased risk of infection and hemorrhaging from vessel injury, leading to higher mortality.[11]

As the human body ages, the bones become more weak and brittle and are therefore more susceptible to fractures. Certain precautions are crucial in order to lower the risk of getting pelvic fractures. The most damaging is one from a car accident, cycling accident, or falling from a high building which can result in a high energy injury.[12] This can be very dangerous because the pelvis supports many internal organs and can damage these organs. Falling is one of the most common causes of a pelvic fracture. Therefore, proper precautions should be taken to prevent this from happening.

An example of pelvic binding using a sheet and cable ties

A pelvic fracture is often complicated and treatment can be a long and painful process. Depending on the severity, pelvic fractures can be treated with or without surgery.

A high index of suspicion should be held for pelvic injuries in any one with major trauma. The pelvis should be stabilized with a pelvic binder.[13] This can be a purpose made device; however, improvised pelvic binders have also been used around to good effect.[14] Stabilisation of the pelvic ring reduces blood loss from the pelvic vessels and reduced the risk of death.

Surgery is often required for pelvic fractures. Many methods of pelvic stabilization are used including external fixation or internal fixation and traction.[15][16] There are often other injuries associated with a pelvic fracture so the type of surgery involved must be thoroughly planned.[17]

Pelvic fractures that are treatable without surgery are treated with bed rest. Once the fracture has healed enough, rehabilitation can be started with first standing upright with the help of a physical therapist, followed by starting to walk using a walker and eventually progressing to a cane.

Mortality rates in people with pelvic fractures are between 10 and 16 percent.[18] However, death is typically due to associated trauma affecting other organs, such as the brain. Death rates due to complications directly related to pelvic fractures, such as bleeding, are relatively low.[18]

About 10 percent of people that seek treatment at a level 1 trauma center after a blunt force injury have a pelvic fracture.[18] Motorcycle injuries are the most common cause of pelvic fractures, followed by injuries to pedestrians caused by motor vehicles, large falls (over 15 feet), and motor vehicle crashes.[18]