A Pancoast tumor is a cancer that begins in the upper part of the lung.[2] It often spreads to nearby tissues such as the ribs and vertebrae.[2] Symptoms on the affected side may include shoulder pain, arm numbness, large pupil, dropping of the upper eyelid, and shinkage of muscles in the hand.[1] Later in the course of the disease shortness of breath may occur.[1]

More than 95% of Pancoast tumors are non-small cell lung cancers, with most of the rest being small cell lung cancer.[1] Uncommonly it may occur as a result of thyroid cancer, lymphoma, or metastasis.[1] An upper lung abscess may also cause similar symptoms.[1] The underlying mechanism involves compression or invasion of structures in the area.[1] Diagnosis is by medical imaging and tissue biopsy.[1]

Treatment generally involves chemotherapy, radiation therapy, and surgery.[1] Pancoast tumors represent about 4% of lung cancers.[1] It was first described in 1838 by Edward Hare and is named after Henry Pancoast, an American radiologist, who described the condition in 1924.[3]

Aside from cancer general symptoms such as malaise, fever, weight loss and fatigue, Pancoast tumor can include a complete Horner's syndrome in severe cases: miosis (constriction of the pupils), anhidrosis (lack of sweating), ptosis (drooping of the eyelid), and pseudoenophathalmos (because of the ptosis). In progressive cases, the brachial plexus is also affected, causing pain and weakness in the muscles of the arm and hand with a symptomatology typical of thoracic outlet syndrome. The tumor can also compress the recurrent laryngeal nerve and from this a hoarse voice and "bovine" (non-explosive) cough may occur.

A Pancoast tumor is an apical tumor that is typically found in conjunction with a smoking history. The clinical signs and symptoms can be confused with neurovascular compromise at the level of the superior thoracic aperture. The patient's smoking history, rapid onset of clinical signs and symptoms, and pleuritic pain can suggest an apical tumor. A Pancoast tumor can give rise to both Pancoast syndrome and Horner's syndrome. When the brachial plexus roots are involved, it will produce Pancoast syndrome; involvement of sympathetic fibers as they exit the cord at T1 and ascend to the superior cervical ganglion will produce Horner's syndrome. 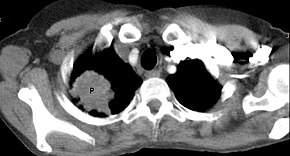 Diagnosis of Pancoast tumor is usually made after evaluating clinical symptoms and imaging. Chest X-ray is a good screening test even though Chest CT scan can provide a better resolution and extent to which internal organs are being compressed.[citation needed]

The treatment of a Pancoast lung cancer may differ from that of other types of non-small cell lung cancer. Its position and close proximity to vital structures (such as nerves and spine) may make surgery difficult. As a result, and depending on the stage of the cancer, treatment may involve radiation and chemotherapy given prior to surgery (neoadjuvant treatment). Surgery may consist of the removal of the upper lobe of a lung together with its associated structures (subclavian artery, vein, branches of the brachial plexus, ribs and vertebral bodies), as well as mediastinal lymphadenectomy. Surgical access may be via thoracotomy from the back[4] or the front of the chest[5] and modifications.[6] Nonsurgical treatment may consist of radiation therapy alone or clinical trials of new combinations of treatment.[7]