Osmotic demyelination syndrome, previously known as central pontine myelinolysis, is damage to certain regions of the brain following rapid correction of electrolyte disorders.[2] Symptoms may include difficulty swallowing, difficulty speaking, movement disorders, decreased level of consciousness, and paralysis.[1] Other complications may include seizures and locked in syndrome.[1] Onset is within a day to two weeks of a trigger.[1]

It most commonly occurs as a complication of low sodium, particularly severely low sodium and its correction by more than 12 mmol/L in a day.[1] Other potential causes include low potassium, high sodium, low phosphate, liver transplantation, high blood sugar, and kidney failure.[1] Risk factors include alcoholism and malnutrition.[1] The underlying mechanism involves a rapid rise in serum tonicity leading to demyelination of white matter.[2] While the initial cases described the pons being affected, other areas of the brain have also found to be involved.[1] Diagnosis is suspected based on symptoms and confirmed by MRI.[1]

Prevention is by correcting low sodium at a rate of less than 0.5 mmol/L per hour.[1] Once the condition has developed there is no specific treatment, though immunotherapy and vaptans may be tried.[1] Poor outcomes occur in a third to half of those effected.[1] The risk of death is 10 to 60%.[1]

Osmotic demyelination syndrome is rare in the general population, though may affect up to 30% of at risk groups.[1] It most commonly occurs in those between the age of 30 and 50.[1] Males are more commonly affected than females.[1] It was first described by Adams in 1959.[1][3]

Symptoms depend on the regions of the brain involved. Prior to its onset, patients may present with the neurological signs and symptoms of hyponatraemic encephalopathy such as nausea and vomiting, confusion, headache and seizures. These symptoms may resolve with normalisation of the serum sodium concentration. Three to five days later, a second phase of neurological manifestations occurs correlating with the onset of myelinolysis. Observable immediate precursors may include seizures, disturbed consciousness, gait changes, and decrease or cessation of respiratory function.[4][5]

The classical clinical presentation is the progressive development of spastic quadriparesis, pseudobulbar palsy, and emotional lability (pseudobulbar affect), with other more variable neurological features associated with brainstem damage. These result from a rapid myelinolysis of the corticobulbar and corticospinal tracts in the brainstem.[6] 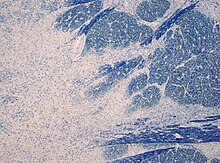 The most common cause is overly-rapid correction of low blood sodium levels (hyponatremia).[8] Apart from rapid correction of hyponatraemia, there are case reports of central pontine myelinolysis in association with hypokalaemia, anorexia nervosa when feeding is started, patients undergoing dialysis and burn victims. There is a case report of central pontine myelinolysis occurring in the context of refeeding syndrome, in the absence of hyponatremia.[9]

It has also been known to occur in patients suffering withdrawal symptoms of chronic alcoholism.[7] In these instances, occurrence may be entirely unrelated to hyponatremia or rapid correction of hyponatremia. It could affect patients who take some prescription medicines that are able to cross the blood-brain barrier and cause abnormal thirst reception - in this scenario the central pontine myelinolysis is caused by polydipsia leading to low blood sodium levels (hyponatremia).[citation needed]

In people with schizophrenia and psychogenic polydipsia, inadequate thirst reception leads to excessive water intake, severely diluting serum sodium.[10] With this excessive thirst combined with psychotic symptoms, brain damage such as central pontine myelinolysis[11] may result from hyperosmolarity caused by excess intake of fluids, (primary polydipsia) although this is difficult to determine because such patients are often institutionalised and have a long history of mental health conditions.[12]

It has been observed following hematopoietic stem cell transplantation.[13]

Those prone to hyponatremia include:

The currently accepted theory states that the brain cells adjust their osmolarities by changing levels of certain osmolytes like inositol, betaine, and glutamine in response to varying serum osmolality. In the context of chronic low plasma sodium (hyponatremia), the brain compensates by decreasing the levels of these osmolytes within the cells, so that they can remain relatively isotonic with their surroundings and not absorb too much fluid. The reverse is true in hypernatremia, in which the cells increase their intracellular osmolytes so as not to lose too much fluid to the extracellular space.[citation needed]

It can be diagnosed clinically in the appropriate context, but may be difficult to confirm radiologically using conventional imaging techniques. Changes are more prominent on MRI than on CT, but often take days or weeks after acute symptom onset to develop. Imaging by MRI typically demonstrates areas of hyperintensity on T2-weighted images.[27]

There is no inflammation present, which separates this condition from multiple sclerosis and acute disseminated encephalomyelitis.[28]

To minimise the risk of this condition developing from its most common cause, overly rapid reversal of hyponatremia, the hyponatremia should be corrected at a rate not exceeding 10 mmol/L/24 h or 0.5 mEq/L/h; or 18 mEq/L/48hrs; thus avoiding demyelination.[26] No large clinical trials have been performed to examine the efficacy of therapeutic re-lowering of serum sodium, or other interventions sometimes advocated such as steroids or plasma exchange.[26] Alcoholic patients should receive vitamin supplementation and a formal evaluation of their nutritional status.[29][30]

Once osmotic demyelination has begun, there is no cure or specific treatment. Care is mainly supportive. Alcoholics are usually given vitamins to correct for other deficiencies. The favourable factors contributing to the good outcome in central pontine myelinolysis without hyponatremia were: concurrent treatment of all electrolyte disturbances, early intensive care unit involvement at the advent of respiratory complications, early introduction of feeding including thiamine supplements with close monitoring of the electrolyte changes and input.[9]

Research has led to improved outcomes.[31] Animal studies suggest that inositol reduces the severity of osmotic demyelination syndrome if given before attempting to correct chronic hyponatraemia.[32] Further study is required before using inositol in humans for this purpose.[33]

Though traditionally the prognosis is considered poor, a good functional recovery is possible. All patients at risk of developing refeeding syndrome should have their electrolytes closely monitored, including sodium, potassium, magnesium, glucose and phosphate.[9] Recent data indicate that the prognosis of critically ill patients may even be better than what is generally considered,[34] despite severe initial clinical manifestations and a tendency by the intensivists to underestimate a possible favorable evolution.[35] While some patients die, most survive and of the survivors, approximately one-third recover; one-third are disabled but are able to live independently; one-third are severely disabled.[36] Permanent disabilities range from minor tremors and ataxia to signs of severe brain damage, such as spastic quadriparesis and locked-in syndrome.[37] Some improvements may be seen over the course of the first several months after the condition stabilizes.[citation needed]

The degree of recovery depends on the extent of the original axonal damage.[25]