Oprelvekin, sold under the brand name Neumega is a medication used to prevent low platelets due to chemotherapy.[1] It is given by injection under the skin.[1] Effects begin after around 7 days and continue for about 7 days after the last dose.[1]

Common side effects include swelling, fast heart rate, shortness of breath, and red eyes.[1] Other side effects may include anaphylaxis, heart failure, and atrial fibrillation.[1] It is a recombinant form of interleukin 11 (IL-11) which primarily stimulates the production of platelets.[1]

Most people will be able to self-administer the drug after appropriate training.

The first dose should be given 6 to 24 hours after completion of chemotherapy. Dosing should be continued until platelet counts reach at least 50,000 cells. Usually, one course of Neumega encompasses 10 to 21 days.

The drug should be discontinued at least 2 days before starting the next chemotherapy cycle. 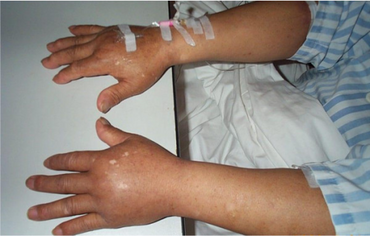 After treatment with IL-11, bilateral edema of the hands were observed.

Neumega has caused allergic reaction which at times have been very serious. Symptoms have been edema of the face and tongue, or larynx; shortness of breath; wheezing; chest pain; hypotension (including shock); dysarthria; loss of consciousness, rash, urticaria, flushing, and fever. These reaction can occur after the first dose or after any later application. Neumega should be permanently discontinued in patients with any sign of allergy. Treatment is largely symptomatic.

Oprelvekin also has caused quite often fluid retention, ranging from peripheral edema (approximately 40% of patients) to dyspnea and full developed lung edema with or without cardiac decompensation (see contraindications and precautions). These symptoms have led to some deaths. Fluid retention may also lead to dilutional anemia (in 10 to 15% of patients). Hypokalemia may also result. Symptoms of fluid retention have been observed more often in patients following myeloablative chemotherapy (see contraindications). Severe arrhythmias (atrial flutter and atrial fibrillation) as well as fatal cardiac arrest have also been seen which may or may be not attributed to fluid retention/increased volume. Isolated cases of stroke have been noted, those patients with previous transient ischemic attacks or partial/minor strokes may be at particular risk.

Papilledema of the eyes has been observed (2%) and may lead to disturbed visual acuity and even temporary or permanent blindness. Patients with preexisting papilledema or with involvement of the central nervous system may be at higher risk.

In postmarketing studies isolated cases of severe ventricular arrhythmias and renal failure have been seen.

Injection site reaction like have also been observed (dermatitis, pain, and discoloration), but are usually mild.

In studies with rats and rabbits treated chronically, Oprelvekin showed embryo- and fetotoxicity (early death of embryos and reduction of number of fetus, fetal malformations etc.). There is no sufficient human data available. Pregnant women should only be treated, if the benefit to the mother outweighs the potential risk to the unborn.

No human data is available if the drug is distributed into human milk. Nursing women should either discontinue breast-feeding or Neumega, the decision should take into account the importance of the drug to the mother.

The concomitant application of GM-CSFs such as filgrastim or Sargramostim showed no potential interactions. Additionally, no other interactions are known. Interactions with drugs undergoing P450 enzyme metabolism are not likely to occur.

IL-11 is a member of a family of human growth factors and is being produced in the bone marrow of healthy adults. Synonyms are:

Oprelvekin is produced in Escherichia coli (E. coli) by recombinant DNA technology. The protein has a molecular mass of approximately 19,000 g/mol, and is non-glycosylated. The polypeptide is 177 amino acids in length (the natural IL-11 has 178). This alteration has not resulted in measurable differences in bioactivity either in vitro or in vivo.

The primary hematopoietic activity of Neumega is stimulation of megakaryocytopoiesis and thrombopoiesis.[5] In mice and nonhuman primate studies Neumega has shown potent thrombopoietic activity in compromised hematopoiesis, including moderately to severely myelosuppressed animals. In these studies, Neumega improved platelet nadirs and accelerated platelet recoveries compared to controls.

In animal studies Oprelvekin also has non-hematopoietic activities. This includes the regulation of intestinal epithelium growth (enhanced healing of gastrointestinal lesions), the inhibition of adipogenesis, the induction of acute phase protein synthesis (e.g., fibrinogen), and inhibition of macrophageal released pro-inflammatory cytokines. However, pathologic changes, some also seen in humans, have been noticed:

In preclinical human trials mature megakaryocytes which develop during in vivo treatment with Neumega were ultrastructurally, morphologically, and functionally normal. They also showed a normal life span.

In a study in which a single 50 µg/kg subcutaneous dose was administered to eighteen healthy men, the peak serum concentration (Cmax) of 17.4 ± 5.4 ng/mL was reached at 3.2 ± 2.4 h (Tmax) following dosing. The terminal half-life was 6.9 ± 1.7 h. In a second study in which single 75 µg/kg subcutaneous and intravenous doses were administered to twenty-four healthy subjects, the pharmacokinetic profiles were similar between men and women. The absolute bioavailability of Neumega was >80%. In a study in which multiple, subcutaneous doses of both 25 and 50 µg/kg were administered to cancer patients receiving chemotherapy, Neumega did not accumulate and clearance of Neumega was not altered following multiple doses. Pediatric cancer patients treated with aggressive chemotherapy showed similar pharmakinetic characteristics.

In humans treated with Oprelvekin on a daily base a twofold increase in fibrinogen levels occurred. Healthy volunteers displayed an increase in von-Willebrand-factor (vWf) activity. Isolated molecules formed under Oprelvekin were found to have exact the same multimere structure as the 'normal' factor and were therefore fully functioning. These increases in coagulation factors may contribute to the development of stroke (see under side-effects), but a precise association cannot be made at this stage.

In a variety of clinical studies upon which FDA approval is based, Neumega showed effectivity in reducing thrombocytopenia in oncologic patients treated with myelosuppressant chemotherapeutic drugs as measured by significantly decreased need of platelet transfusions.

Neumega is manufactured and sold by Wyeth. The drug is formulated in single-use vials containing 5 mg of oprelvekin (specific activity approximately 8 × 106 Units/mg) as a sterile, lyophilized powder. The FDA approved the drug in 1997.