Ochronosis (or Exogenous Ochronosis) is a syndrome caused by the accumulation of homogentisic acid in connective tissues.[1]

The condition was named after the yellowish (ocher-like) discoloration of the tissue seen on microscopic examination. Macroscopically, though, the affected tissues appear bluish-grey because of a light-scattering phenomenon known as the Tyndall effect. The condition is most often associated with alkaptonuria, but can occur from exogenous administration of phenol complexes such as hydroquinone. It was first described by Rudolf Virchow in 1865.[2]

The two types of ochronosis are endogenous and exogenous. The endogenous variety is an autosomal-recessive disease, known as alkaptonuria, that is caused by a lack of homogentisate oxidase enzyme.[3] Exogenous ochronosis is an avoidable dermatitis that can be caused by the topical application of compounds such as hydroquinone or phenols.[3] It was first seen in 1912, when a patient who used phenol on a leg ulcer was found by Beddard and Plumtre to have this condition.[4] Hydroquinone-induced exogenous ochronosis was found in 1975 by Findlay, who observed the condition in patients who used skin lightening creams containing the compound.[5]

The three clinical stages of exogenous ochronosis are:[6]

Symptoms of exogenous ochronosis include:[8]

Most of the lesions are seen on areas of the body that get the most sun.[3]

Exogenous ochronosis can be caused from long-term use of certain "skin-lightening" products, even if the hydroquinone is in amounts as small as 2%.[3] Skin-lightening products are still prevalent in many parts of the world.[9] This may be due to aesthetic or social-standing reasons, in areas where a lighter skin tone is considered to be a sign of wealth or beauty.[9] Also, skin-lightening creams containing compounds such as hydroquinone are commonly used to help with hyperpigmentation disorders such as melasma.[10]

Hydroquinone is the compound most frequently used in skin-whitening products. Due to concerns about its side effects, it was almost banned by the FDA in 2006, as medical issues of carcinogenicity and reports of disfiguring ochronosis existed.[11] In the European Union hydroquinone has been banned in cosmetic creams since 2000.[12]

Long-term use of creams containing this compound may lead to exogenous ochronotic lesions. The duration of use is directly proportional to the risk of developing the condition, with most cases occurring after years of use.[3] Around 10–15 million skin lightening products are sold annually, with Japan being the major buyer.[13]

Ochronosis occurs because of deposition of phenols (such as homogentisic acid and hydroquinone) as plaques in the matrix of cartilage. The pigments can also be incorporated into collagen and elastin fibers. In the skin, the pigment alters the structure of the fibers, causing enlargement and curling. The embedded pigments also form crosslinks with pigment depositions in adjacent fibers, stabilizing and reducing the elastic recoil of the fibers. This results in hardening of elastic structures, increasing their rigidity and brittleness. Once ruptured, the exposed pigments cause a foreign body reaction and inflammation. This pigment deposition also invokes deposition of hydroxyapatite, the mineral responsible for bone calcification, further hardening the connective tissue. The pigment can also be excreted by glandular cells in apocrine and ceruminous sweat glands, as well as breast and prostate tissue. This results in darkly pigmented sweat and breast milk. Excretion of the pigment is only found in endogenous ochronosis and should not occur from topical phenols.[citation needed] 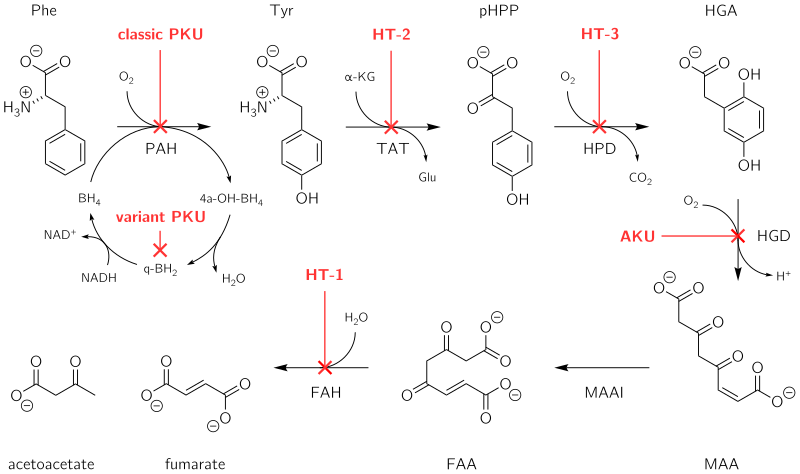 Pathophysiology of alcaptonuria is due to the absence of functional homogentisate dioxygenase in the liver.

The diagnosis is often made as an incidental finding intraoperatively. Cartilage exposed to the air turns dark gray or black within minutes.[citation needed]

Treatment is predominantly preventive. Avoidance of topical phenols and diets low in tyrosine may help.[citation needed] Replacement and repair of damaged tissue is also possible.

Hydroquinone-induced exogenous ochronosis is an avoidable dermatosis that is exceedingly difficult to treat. However, some studies show that treatment may be possible with a Q-switched alexandrite (755 nm) laser.[14]