A Nipah virus infection is a viral infection caused by the Nipah virus.[2] Symptoms from infection vary from none to fever, cough, headache, shortness of breath, and confusion.[1][2] This may worsen into a coma over a day or two.[1] Complications can include inflammation of the brain and seizures following recovery.[2]

The Nipah virus (NiV) is a type of RNA virus in the genus Henipavirus.[2] The virus normally circulates among specific types of fruit bats.[2] It can both spread between people and from other animals to people.[2] Spread typically requires direct contact with an infected source.[3] Diagnosis is based on symptoms and confirmed by laboratory testing.[4]

Management involves supportive care.[2] As of 2018 there is no vaccine or specific treatment.[2] Prevention is by avoiding exposure to bats and sick pigs and not drinking raw date palm sap.[5] As of May 2018 about 700 human cases of Nipah virus are estimated to have occurred and 50 to 75 percent of those who were infected died.[6][8][7] In May 2018, an outbreak of the disease resulted in 17 deaths in the Indian state of Kerala.[9][10][11]

The disease was first identified in 1998 during an outbreak in Malaysia while the virus was isolated in 1999.[2][12] It is named after a village in Malaysia, Sungai Nipah.[12] Pigs may also be infected and millions were killed by Malaysian authorities in 1999 to stop the spread of disease.[2][12]

The symptoms start to appear after 5–14 days from exposure.[12] Initial symptoms are fever, headache, drowsiness followed by disorientation and mental confusion. These symptoms can progress into coma as fast as in 24–48 hours. Encephalitis, inflammation of the brain, is a potentially fatal complication of Nipah virus infection. Respiratory illness can also be present during the early part of the illness.[12] Nipah-case patients who have breathing difficulty are more likely than those without respiratory illness to transmit the virus,[13] as are those who are more than 45 years of age.[14] The disease is suspected in symptomatic individuals in the context of an epidemic outbreak.

The risk of exposure is high for hospital workers and caretakers of those infected with the virus. In Malaysia and Singapore, Nipah virus infection occurred in those with close contact to infected pigs. In Bangladesh and India, the disease has been linked to consumption of raw date palm sap (toddy) and eating of fruits partially consumed by bats and using water from wells inhabited by bats.[15][16] 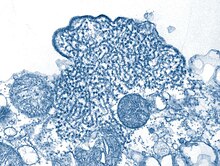 Laboratory diagnosis of Nipah virus infection is made by:

IgG and IgM antibody detection can be done after recovery to confirm Nipah virus infection. Immunohistochemistry on tissues collected during autopsy also confirms the disease.[12]

Prevention of Nipah virus infection is important since there is no effective treatment for the disease. The infection can be prevented by avoiding exposure to bats in endemic areas and sick pigs. Drinking of raw palm sap (palm toddy) contaminated by bat excrete,[18] eating of fruits partially consumed by bats and using water from wells infested by bats[19] should be avoided. Bats are known to drink toddy that is collected in open containers, and occasionally urinate in it, which makes it contaminated with the virus.[18] Switching to closed top containers prevents transmission via this route. Surveillance and awareness are important for preventing future outbreaks. The association of this disease within reproductive cycle of bats is not well studied. Standard infection control practices should be enforced to prevent nosocomial infections. A subunit vaccine using the Hendra G protein was found to produce cross-protective antibodies against henipavirus and nipavirus has been used in monkeys to protect against Hendra virus, although its potential for use in humans has not been studied.[20]

Currently there is no specific treatment for Nipah virus infection as of 2020.[21] The mainstay of treatment is supportive care.[22][21] Standard infection control practices and proper barrier nursing techniques are recommended to avoid the spread of the infection from person to person.[22] All suspected cases of Nipah virus infection should be isolated.[23] While tentative evidence supports the use of ribavirin, it has not yet been studied in people with the disease.[22] Specific antibodies have also been studied in an animal model with potential benefit.[22] Acyclovir and favipiravir has also been tried,[21] as has remdesivir.[24] 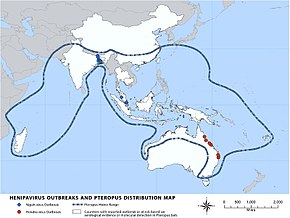 Nipah virus outbreaks have been reported in Malaysia, Singapore, Bangladesh and India. The highest mortality due to Nipah virus infection has occurred in Bangladesh. In Bangladesh, the outbreaks are typically seen in winter season.[25] Nipah virus first appeared in Malaysia in 1998 in peninsular Malaysia in pigs and pig farmers. By mid-1999, more than 265 human cases of encephalitis, including 105 deaths, had been reported in Malaysia, and 11 cases of either encephalitis or respiratory illness with one fatality were reported in Singapore.[26] In 2001, Nipah virus was reported from Meherpur District, Bangladesh[27][28] and Siliguri, India.[27] The outbreak again appeared in 2003, 2004 and 2005 in Naogaon District, Manikganj District, Rajbari District, Faridpur District and Tangail District.[28] In Bangladesh, there were also outbreaks in subsequent years.[29][8]

Ribavirin, m102.4 monoclonal antibody and favipiravir are being studied as treatments as of 2019.[46]

Ribavirin has been studied in a small number of people, however whether or not it is useful is unclear as of 2011, but a few people have returned to their normal life after having been treated with this medicine.[47] In vitro studies and animal studies have shown conflicting results in the efficacy of ribavirin against NiV and Hendra, with some studies showing effective inhibition of viral replication in cell lines[48][49] whereas some studies in animal models showed that ribavirin treatment only delayed but did not prevent death after  NiV or Hendra virus infection.[50][51]

The anti-malarial drug chloroquine was shown to block the critical functions needed for maturation of Nipah virus, although no clinical benefit has yet been observed.[52]

Passive immunization using a human monoclonal antibody - m102.4 that targets the ephrin-B2 and ephrin-B3 receptor binding domain of the henipavirus Nipah G glycoprotein has been evaluated in the ferret model as post-exposure prophylaxis.[6][12] m102.4, has been used in people on a compassionate use basis in Australia and was in pre-clinical development in 2013.[6]