Nail clubbing, also known as digital clubbing, is a rounded enlargement of the finger or toe nails.[1][3] Usually both sides are involved and there is a lack of pain.[3] Onset may occur over a two week period and if the underlying cause is corrected may resolve over a similar period of time.[1] When it occurs together with joint pain and swelling, and abnormal skin and bone growth it is known as hypertrophic osteoarthropathy.[5]

Clubbing is associated with lung cancer, lung infections, COPD, interstitial lung disease, cystic fibrosis, cardiovascular disease, inflammatory bowel disease, cirrhosis, and certain medications.[1][4] Clubbing may also run in families or occur without any identifiable cause.[1] The underlying mechanism involves thickening of primarily the early part of the nail bed.[4] Diagnosis is based on examination.[4]

Treatment is based on the underlying cause.[1] Rates of clubbing are unknown; it was present in about 1% of people admitted to an internal medicine unit of a hospital.[1] Clubbing has described since the time of Hippocrates.[1]

Clubbing is present in one of five stages:[6]

Clubbing is associated with

Nail clubbing is not specific to chronic obstructive pulmonary disease (COPD). Therefore, in people with COPD and significant degrees of clubbing, a search for signs of bronchogenic carcinoma (or other causes of clubbing) might still be indicated.[6]

A congenital form has also been recognized.[11]

Only one side may be involved in hemiplegia or vascular disorders.[4] 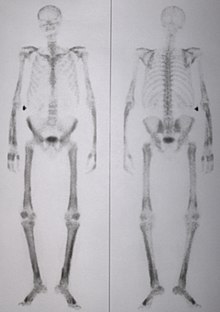 Bone scan of a person with HPOA

A special form of clubbing is hypertrophic pulmonary osteoarthropathy (HPOA), known in continental Europe as Pierre Marie-Bamberger syndrome. This is the combination of clubbing and thickening of periosteum (connective tissue lining of the bones) and synovium (lining of joints), and is often initially diagnosed as arthritis. It is commonly associated with lung cancer.[citation needed]

Primary hypertrophic osteoarthropathy is HPOA without signs of pulmonary disease. This form has a hereditary component, although subtle cardiac abnormalities can occasionally be found. It is known eponymously as the Touraine–Solente–Golé syndrome. This condition has been linked to mutations in the gene on the fourth chromosome (4q33-q34) coding for the enzyme 15-hydroxyprostaglandin dehydrogenase (HPGD); this leads to decreased breakdown of prostaglandin E2 and elevated levels of this substance.[12]

The exact cause for sporadic clubbing is unknown. Theories as to its cause include:

Clubbing of the fingernail: The red line shows the outline of a clubbed nail.

When clubbing is observed, pseudoclubbing should be excluded before making the diagnosis. Associated conditions may be identified by taking a detailed medical history—particular attention is paid to lung, heart, and gastrointestinal conditions—and conducting a thorough clinical examination, which may disclose associated features relevant to the underlying diagnosis. Additional studies such as a chest X-ray and a chest CT-scan may reveal otherwise asymptomatic cardiopulmonary disease.[6]

Schamroth's test or Schamroth's window test (originally demonstrated by South African cardiologist Leo Schamroth on himself)[14] is a popular test for clubbing. When the distal phalanges (bones nearest the fingertips) of corresponding fingers of opposite hands are directly opposed (place fingernails of same finger on opposite hands against each other, nail to nail), a small diamond-shaped "window" is normally apparent between the nailbeds. If this window is obliterated, the test is positive and clubbing is present.

The exact frequency of clubbing in the population is not known. A 2008 study found clubbing in 1%, or 15 patients, of 1511 patients admitted to a department of internal medicine in Belgium. Of these, 40%, or 6 patients, turned out to have significant underlying disease of various causes, while 60%, or 9 patients, had no medical problems on further investigations and remained well over the subsequent year.[15]

At least since the time of Hippocrates, clubbing has been recognized as a sign of disease.[1] The phenomenon has been called "Hippocratic fingers".[16]