Molar pregnancy is a form of pregnancy were a non-viable fertilized egg implants in the uterus and the placenta forms a tumor.[2] They may be complete or less commonly partial.[2] A complete mole diagnosed in the second trimester may present with an overly large uterus, low red blood cells, vomiting, high blood pressure, hyperthyroidism, and breathing problems.[1] With earlier diagnosis or with an partial mole these symptoms are less common.[1] Well typically benign, they do have the potential to become cancer (15% to 20% with complete, 1% to 5% with partial).[2]

Risk factors include age less than 20 or over 35, previous molar pregnancy or miscarriage, smoking, and a diet low in vitamin A.[2] A complete mole forms when an egg that has lost its DNA is fertilized by a single sperm which than duplicates its DNA (most commonly) or is fertilized by two sperm (less commonly) resulting in cells with 46 chromosomes in both cases.[2] A partial mole occurs when a normal egg is fertilized by one sperm which duplicates its DNA or by two sperm thus resulting in most often 60 chromosomes per cell.[2] A partial mole contains fetal tissue well a complete mole does not.[2] A molar pregnancy is a type of gestational trophoblastic disease.[2] Diagnosis is generally based on a high hCG and ultrasound findings.[1]

Treatment is generally with dilation and curettage or hysterectomy.[1][2] Rh immune globulin is recommended in those who are Rh-negative.[1] Measurements of hCG levels should be done weekly until less are less than 5 mIU per ml for three weeks and than should be done monthly for six months.[1] Molar pregnancy occurs in about 0.6 to 1.2 per 1,000 pregnancies in North America and Europe.[2] Rates are higher in Asia being up to 1 in 100 pregnancies in Indonesia.[3]

Molar pregnancies usually present with painless vaginal bleeding in the fourth to fifth months of pregnancy.[4] The uterus may be larger than expected, or the ovaries may be enlarged. There may also be more vomiting than would be expected (hyperemesis). Sometimes there is an increase in blood pressure along with protein in the urine. Blood tests will show very high levels of human chorionic gonadotropin (hCG).[5]

The cause of this condition is not completely understood. Risk factors may include defects in the egg, abnormalities within the uterus, or nutritional deficiencies. Women under 20 or over 40 years of age have a higher risk. Other risk factors include diets low in protein, folic acid, and carotene.[6] The diploid set of sperm-only DNA means that all chromosomes have sperm-patterned methylation suppression of genes. This leads to overgrowth of the syncytiotrophoblast whereas dual egg-patterned methylation leads to a devotion of resources to the embryo, with an underdeveloped syncytiotrophoblast. This is considered to be the result of evolutionary competition, with male genes driving for high investment into the fetus versus female genes driving for resource restriction to maximise the number of children.[7] 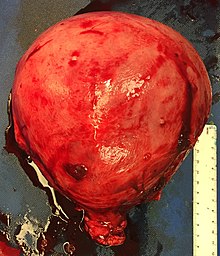 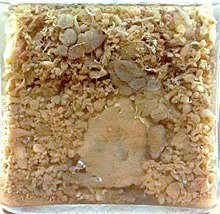 A hydatidiform mole is a pregnancy/conceptus in which the placenta contains grapelike vesicles (small sacs) that are usually visible to the naked eye. The vesicles arise by distention of the chorionic villi by fluid. When inspected under the microscope, hyperplasia of the trophoblastic tissue is noted. If left untreated, a hydatidiform mole will almost always end as a spontaneous abortion (miscarriage).

These villi grow in clusters that resemble grapes.[9] A molar pregnancy can develop when a fertilized egg does not contain an original maternal nucleus. The products of conception may or may not contain fetal tissue. It is characterized by the presence of a hydatidiform mole (or hydatid mole, mola hydatidosa).[4]

Most partial moles are triploid (three chromosome sets). The nucleus contains one maternal set of genes and two paternal sets. The mechanism is usually the reduplication of the paternal haploid set from a single sperm, but may also be the consequence of dispermic (two sperm) fertilization of the egg.[10]

In rare cases, hydatidiform moles are tetraploid (four chromosome sets) or have other chromosome abnormalities.

A small percentage of hydatidiform moles have biparental diploid genomes, as in normal living persons; they have two sets of chromosomes, one inherited from each biological parent. Some of these moles occur in women who carry mutations in the gene NLRP7, predisposing them towards molar pregnancy. These rare variants of hydatidiform mole may be complete or partial.[11][12][13] 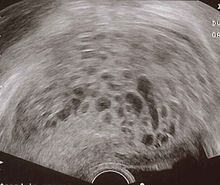 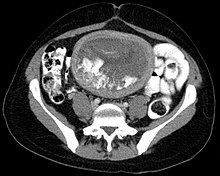 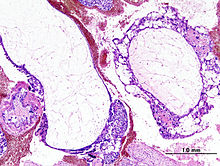 The diagnosis is strongly suggested by ultrasound (sonogram), but definitive diagnosis requires histopathological examination. On ultrasound, the mole resembles a bunch of grapes ("cluster of grapes" or "honeycombed uterus" or "snow-storm").[14] There is increased trophoblast proliferation and enlarging of the chorionic villi, and angiogenesis in the trophoblasts is impaired.[15]

Sometimes symptoms of hyperthyroidism are seen, due to the extremely high levels of hCG, which can mimic the effects of thyroid-stimulating hormone.[15]

Hydatidiform moles should be treated by evacuating the uterus by uterine suction or by surgical curettage as soon as possible after diagnosis, in order to avoid the risks of choriocarcinoma.[16] Patients are followed up until their serum human chorionic gonadotrophin (hCG) level has fallen to an undetectable level. Invasive or metastatic moles (cancer) may require chemotherapy and often respond well to methotrexate. As they contain paternal antigens, the response to treatment is nearly 100%. Patients are advised not to conceive for half a year after hCG levels have normalized. The chances of having another molar pregnancy are approximately 1%.

Management is more complicated when the mole occurs together with one or more normal fetuses.

In some women, the growth can develop into gestational trophoblastic neoplasia. For women who have complete hydatidiform mole and are at high risk of this progression, evidence suggests giving prophylactic chemotherapy (known as P-chem) may reduce the risk of this happening.[17] However P-chem may also increase toxic side effects, so more research is needed to explore its effects.[17]

The uterine curettage is generally done under the effect of anesthesia, preferably spinal anesthesia in hemodynamically stable patients. The advantages of spinal anesthesia over general anesthesia include ease of technique, favorable effects on the pulmonary system, safety in patients with hyperthyroidism and non-tocolytic pharmacological properties. Additionally, by maintaining patient's consciousness one can diagnose the complications like uterine perforation, cardiopulmonary distress and thyroid storm at an earlier stage than when the patient is sedated or is under general anesthesia.[18]

More than 80% of hydatidiform moles are benign. The outcome after treatment is usually excellent. Close follow-up is essential to ensure that treatment has been successful.[19] Highly effective means of contraception are recommended to avoid pregnancy for at least 6 to 12 months. Women who have had a prior partial or complete mole, have a slightly increased risk of a second hydatidiform mole in a subsequent pregnancy, meaning a future pregnancy will require an earlier ultrasound scan.[19]

In 10 to 15% of cases, hydatidiform moles may develop into invasive moles. This condition is named persistent trophoblastic disease (PTD). The moles may intrude so far into the uterine wall that hemorrhage or other complications develop. It is for this reason that a post-operative full abdominal and chest x-ray will often be requested.

In 2 to 3% of cases, hydatidiform moles may develop into choriocarcinoma, which is a malignant, rapidly growing, and metastatic (spreading) form of cancer. Despite these factors which normally indicate a poor prognosis, the rate of cure after treatment with chemotherapy is high.

Over 90% of women with malignant, non-spreading cancer are able to survive and retain their ability to conceive and bear children. In those with metastatic (spreading) cancer, remission remains at 75 to 85%, although their childbearing ability is usually lost.

Hydatidiform moles are a rare complication of pregnancy, occurring once in every 1,000 pregnancies in the US, with much higher rates in Asia (e.g. up to one in 100 pregnancies in Indonesia).[3]

The etymology is derived from hydatisia (Greek "a drop of water"), referring to the watery contents of the cysts, and mole (from Latin mola = millstone/false conception).[21] The term, however, comes from the similar appearance of the cyst to a hydatid cyst in an Echinococcosis.[22]