Lymphatic filariasis is a human disease caused by parasitic worms known as filarial worms.[2][3] Most cases of the disease have no symptoms.[2] Some people, however, develop a syndrome called elephantiasis, which is marked by severe swelling in the arms, legs, breasts, or genitals.[2][6] The skin may become thicker as well, and the condition may become painful.[2] The changes to the body have the potential to harm the person's social and economic situation.[2]

The worms are spread by the bites of infected mosquitoes.[2] Three types of worms are known to cause the disease: Wuchereria bancrofti, Brugia malayi, and Brugia timori, with Wuchereria bancrofti being the most common.[2] These worms damage the lymphatic system.[2] The disease is diagnosed by microscopic examination of blood collected during the night.[4] The blood is typically examined as a smear after being stained with Giemsa stain.[4] Testing the blood for antibodies against the disease may also permit diagnosis.[4] Other roundworms from the same family are responsible for river blindness.[7]

Prevention can be achieved by treating entire groups in which the disease exists, known as mass deworming.[2] This is done every year for about six years, in an effort to rid a population of the disease entirely.[2] Medications used include antiparasitics such as albendazole with ivermectin, or albendazole with diethylcarbamazine.[2] The medications do not kill the adult worms but prevent further spread of the disease until the worms die on their own.[2] Efforts to prevent mosquito bites are also recommended, including reducing the number of mosquitoes and promoting the use of bed nets.[2]

In 2015 about 38.5 million people were infected.[5] About 950 million people are at risk of the disease in 54 countries.[2] It is most common in tropical Africa and Asia.[2] The condition has been described throughout ancient history.[8] Lymphatic filariasis is classified as a neglected tropical disease and one of the four main worm infections.[7] The impact of the disease results in economic losses of billions of dollars a year.[2]

The most spectacular symptom of lymphatic filariasis is elephantiasis, a stage 3 lymphedema with thickening of the skin and underlying tissues. This was the first mosquito-borne disease to be discovered.[9] Elephantiasis results when the parasites lodge in the lymphatic system and cause blockages to the flow of lymph. Infections usually begin in childhood.[2]

Elephantiasis mainly affects the lower extremities; the ears, mucous membranes, and amputation stumps are affected less frequently. However, various species of filarial worms tend to affect different parts of the body: Wuchereria bancrofti can affect the arms, breasts, legs, scrotum, and vulva (causing hydrocele formation), while Brugia timori rarely affects the genitals.[11]: 665  Those who develop the chronic stages of elephantiasis are usually amicrofilaraemic and often have adverse immunological reactions to the microfilariae as well as the adult worms.[11]

The subcutaneous worms present with skin rashes, urticarial papules, and arthritis, as well as hyper- and hypopigmentation macules. The related Onchocerca volvulus manifests itself in the eyes, causing "river blindness" (onchocerciasis), one of the leading causes of blindness in the world.[12] [13]

Serous cavity filariasis presents with symptoms similar to subcutaneous filariasis; it may also be associated with ascites following the severe inflammatory reaction in the lymphatics.[14]: 818

Elephantiasis leads to marked swelling of the lower half of the body and thickening of the skin, making it look like that of an elephant, a term called "pachyderm". 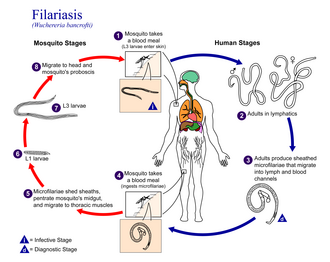 Elephantiasis occurs in the presence of microscopic, thread-like parasitic worms such as Wuchereria bancrofti (the most common[2]), Brugia malayi, and Brugia timori (also known as B. timori), all of which are transmitted by bites from infected mosquitoes.[15] It is a type of helminth infection. Three types of worm cause the disease and damage the lymphatic system.

The disease itself is a result of a complex interplay between several factors: the worm, the endosymbiotic Wolbachia bacteria within the worm, the host’s immune response, and the numerous opportunistic infections and disorders that arise. The adult worms only live in the human lymphatic system.[16] The parasite infects the lymph nodes and blocks the flow of lymph throughout the body; this results in chronic lymphedema, most often noted in the lower torso (typically in the legs and genitals).[17]

The standard method for diagnosing active infection is by finding the microfilariae via microscopic examination.[18] This may be difficult, as in most parts of the world, microfilariae only circulate in the blood at night.[4][18] For this reason, the blood has to be collected nocturnally.[18] The blood sample is typically in the form of a thick smear and stained with Giemsa stain. Testing the blood serum for antibodies against the disease may also be used.[4]

The present objective of prevention is the eradication of lymphatic filariasis, which is achievable since the disease has no known animal reservoir.

The World Health Organization recommends mass deworming—treating entire groups of people who are at risk with a single annual dose of two medicines, namely albendazole in combination with either ivermectin or diethylcarbamazine citrate.[19] With consistent treatment, since the disease needs a human host, the reduction of microfilariae means the disease will not be transmitted, the adult worms will die out, and the cycle will be broken.[20] In sub-Saharan Africa, albendazole (donated by GlaxoSmithKline) is being used with ivermectin (donated by Merck & Co.) to treat the disease, whereas elsewhere in the world, albendazole is used with diethylcarbamazine.[21] As of 2019 WHO recommends prevention with a combination of ivermectin, diethylcarbamazine, and albendazole in areas were onchocerciasis does not occur.[22] Transmission of the infection can be broken when a single dose of these combined oral medicines is consistently maintained annually for a duration of four to six years.[19] Using a combination of treatments better reduces the number of microfilariae in blood. Avoiding mosquito bites, such as by using insecticide-treated mosquito bed nets, also reduces the transmission of lymphatic filariasis.[20][23]

For similar-looking but causally unrelated podoconiosis, international awareness of the disease will have to increase before elimination is possible. In 2011, podoconiosis was added to the World Health Organization's Neglected Tropical Diseases list, which was an important milestone in raising global awareness of the condition.[25] The efforts of the Global Programme to Eliminate LF are estimated to have prevented 6.6 million new filariasis cases from developing in children between 2000 and 2007, and to have stopped the progression of the disease in another 9.5 million people who had already contracted it.[26] Dr. Mwele Malecela, who chairs the programme, said: "We are on track to accomplish our goal of elimination by 2020."[24] In 2010, the WHO published a detailed progress report on the elimination campaign in which they assert that of the 81 countries with endemic LF, 53 have implemented mass drug administration, and 37 have completed five or more rounds in some areas, though urban areas remain problematic.[27]

Treatments for lymphatic filariasis differ depending on the geographic location of the area of the world in which the disease was acquired.[21] In sub-Saharan Africa, albendazole is being used with ivermectin to treat the disease, whereas elsewhere in the world, albendazole is used with diethylcarbamazine.[21] Geo-targeting treatments is part of a larger strategy to eventually eliminate lymphatic filariasis by 2020.[21]

The antibiotic doxycycline is also effective in treating lymphatic filariasis.[28] Its drawbacks over anthelmintic drugs are that it requires 4 to 6 weeks of treatment, should not be used in young children and pregnant women, and is photosensitizing, which limits its use for mass prevention.[28] The parasites responsible for elephantiasis have a population of endosymbiotic bacteria, Wolbachia, that live inside the worm. When the symbiotic bacteria of the adult worms are killed by the antibiotic, they no longer provide chemicals which the nematode larvae need to develop, which either kills the larvae or prevents their normal development. This permanently sterilizes the adult worms, which also die within 1 to 2 years instead of their normal 10 to 14 year lifespan.[29]

A vaccine is not yet available, but in 2013 the University of Illinois College of Medicine was reporting 95% efficacy in testing against B. malayi in mice.[30]

Additionally, surgical treatment may be helpful for issues related to scrotal elephantiasis and hydrocele. However, surgery is generally ineffective at correcting elephantiasis of the limbs.[31]

Elephantiasis caused by lymphatic filariasis is one of the most common causes of disability in the world.[21] A 2012 report noted that lymphatic filariasis affected 120 million people[32] and one billion people at risk for infection.[33] About 40 million people were disfigured or incapacitated by the disease in 2015.[34] It is considered endemic in tropical and subtropical regions of Africa, Asia, Central and South America, and Pacific Island nations.

In areas endemic for podoconiosis, prevalence can be 5% or higher.[35] In communities where lymphatic filariasis is endemic, as many as 10% of women can be afflicted with swollen limbs, and 50% of men can suffer from mutilating genital symptoms.[21]

Filariasis is considered endemic in 73 countries; 37 of these are in Africa.

In many of these countries, considerable progress has been made towards elimination of filariasis. In July 2017, the World Health Organization (WHO) announced that the disease had been eliminated in Tonga.[36] Elimination of the disease has also occurred in Cambodia, the Cook Islands, Egypt, Kiribati, Maldives, Marshall Islands, Niue, Palau, Sri Lanka, Thailand, Vanuatu, Viet Nam and Wallis and Fortuna. This list is constantly updates and adds on the China and South Korea that were among the first countries to eliminate LF, according to the WHO.[36]

A man in Japan is helped to carry his enlarged scrotum

The first documentation of symptoms occurred in the 16th century, when Jan Huyghen van Linschoten wrote about the disease during the exploration of Goa. Similar symptoms were reported by subsequent explorers in areas of Asia and Africa, though an understanding of the disease did not begin to develop until centuries later.

In 1866, Timothy Lewis, building on the work of Jean Nicolas Demarquay [de] and Otto Henry Wucherer, made the connection between microfilariae and elephantiasis, establishing the course of research that would ultimately explain the disease. In 1876, Joseph Bancroft discovered the adult form of the worm.[38] In 1877, the lifecycle involving an arthropod vector was theorized by Patrick Manson, who proceeded to demonstrate the presence of the worms in mosquitoes. Manson incorrectly hypothesized that the disease was transmitted through skin contact with water in which the mosquitoes had laid eggs.[39] In 1900, George Carmichael Low determined the actual transmission method by discovering the presence of the worm in the proboscis of the mosquito vector.[37]

Many people in Malabar, Nayars as well as Brahmans and their wives — in fact about a quarter or a fifth of the total population, including the people of the lowest castes — have very large legs, swollen to a great size; and they die of this, and it is an ugly thing to see. They say that this is due to the water through which they go, because the country is marshy. This is called pericaes in the native language, and all the swelling is the same from the knees downward, and they have no pain, nor do they take any notice of this infirmity.

Researchers at the University of Illinois at Chicago (UIC) have developed a novel vaccine for the prevention of lymphatic filariasis. This vaccine has been shown to elicit strong, protective immune responses in mouse models of lymphatic filariasis infection. The immune response elicited by this vaccine has been demonstrated to be protective against both W. bancrofti and B. malayi infection in the mouse model and may prove useful in the human.[41]

On September 20, 2007, geneticists published the first draft of the complete genome (genetic content) of Brugia malayi, one of the roundworms which causes lymphatic filariasis.[42] This project had been started in 1994 and by 2000, 80% of the genome had been determined. Determining the content of the genes might lead to the development of new drugs and vaccines.[43]