Letrozole, sold under the brand name Femara among others, is a medication used for breast cancer.[2] It has also be used in female infertility in bring about ovulation.[2] For breast cancer, it is only used after menopause.[1] It is taken by mouth.[2]

Common side effects include high cholesterol, hot flushes, joint pain, and swelling.[2] Other side effects may include infertility, tiredness, and osteoporosis.[2] Use in pregnancy may harm the baby.[2] It is an aromatase inhibitor.[2] 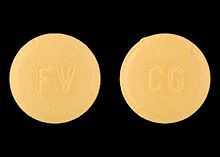 Letrozole is approved by the United States Food and Drug Administration (FDA) for the treatment of local or metastatic breast cancer that is hormone receptor positive or has an unknown receptor status in postmenopausal women.[6]

Tamoxifen is also used to treat hormonally-responsive breast cancer, but it does so by interfering with the estrogen receptor. However, letrozole is effective only in post-menopausal women, in whom estrogen is produced predominantly in peripheral tissues (i.e. in adipose tissue, like that of the breast) and a number of sites in the brain.[7] In pre-menopausal women, the main source of estrogen is from the ovaries not the peripheral tissues, and letrozole is ineffective.

In post-menopausal women with hormonally-responsive breast cancer, letrozole reduced the recurrence of cancer, but did not change survival rate, compared to tamoxifen.[8][9]

Letrozole has been used for ovulation induction by fertility doctors since 2001 because it has fewer side-effects than clomiphene (Clomid) and less chance of multiple gestation. A study of 150 babies following treatment with either letrozole alone or letrozole and gonadotropins presented at the American Society of Reproductive Medicine 2005 Conference found no difference in overall abnormalities but did find a significantly higher rate of locomotor and cardiac abnormalities among the group having taken letrozole compared to natural conception.[10] A larger, follow-up study with 911 babies compared those born following treatment with letrozole to those born following treatment with clomiphene.[11] That study also found no significant difference in the rate of overall abnormalities, but found that congenital cardiac anomalies was significantly higher in the clomiphene group compared to the letrozole group. Despite this, India banned the usage of letrozole in 2011, citing potential risks to infants.[12] In 2012, an Indian parliamentary committee said that the drug controller office colluded with letrozole's makers to approve the drug for infertility in India and also stated that letrozole's use for infertility was illegal worldwide;[13] however, such off-label uses are legal in many countries such as the US and UK.[14][15]

The antiestrogen action of letrozole has been shown to be useful in pretreatment for termination of pregnancy, in combination with misoprostol. It can be used in place of mifepristone, which is expensive and unavailable in many countries.[16]

Letrozole is sometimes used as a treatment for gynecomastia, although it is probably most effective at this if caught in an early stage (such as in users of anabolic steroids).[17][18][unreliable source?]

Some studies have shown that letrozole can be used to promote spermatogenesis in male patients suffering from nonobstructive azoospermia.[19]

Letrozole has also been shown to delay the fusing of the growth plates in mice.[20] When used in combination with growth hormone, letrozole has been shown effective in one adolescent boy with a short stature.[21]

Letrozole has also been used to treat endometriosis.[22]

Endometrial stromal sarcomas are hormonally sensitive tumors as it is represented that letrozole reduces serum estrogen levels. Letrozole is well-tolerated and is a good option for long-term management of this disease.[23] Also in a study on Uterine myoma the volume was successfully reduced by use of an aromatase inhibitor. Rapid onset of action and avoidance of initial gonadotropin flare with an aromatase inhibitor.[22]

Letrozole is contraindicated in women having a pre-menopausal hormonal status, during pregnancy and lactation.[24]

The most common side effects are sweating, hot flashes, arthralgia (joint pain), and fatigue.[24]

Generally, side effects include signs and symptoms of hypoestrogenism. There is concern that long term use may lead to osteoporosis,[6] which is in certain patient populations such as post-menopausal women or osteoporotics, bisphosphonates may also be prescribed.[citation needed]

Letrozole inhibits the liver enzyme CYP2A6, and to a lesser extent CYP2C19, in vitro, but no relevant interactions with drugs like cimetidine and warfarin have been observed.[24]

Letrozole is an orally active, nonsteroidal, selective aromatase inhibitor and hence an antiestrogen. It prevents aromatase from producing estrogens by competitive, reversible binding to the heme of its cytochrome P450 unit. The action is specific, and letrozole does not reduce production of corticosteroids.[citation needed]