Kernicterus is brain damage due to high levels of bilirubin in a baby's blood.[3] Early symptoms may include poor feeding, decreased activity, jaundice, and vomiting.[1][5] Complications may include seizures, cerebral palsy, hearing loss, vision problems, problems with teeth, and intellectual disability.[3][1]

Risk factors include preterm, darker skin, bruising at birth, Rh disease, poor feeding, and certain genetic conditions.[3][6][4] Other risks include low albumin, sepsis, and the use of certain medications like ceftriaxone and aspirin.[1] The underlying mechanism involves unbound bilirubin entering the central nervous system and resulting in toxicity to brain cells.[2] Diagnosis is suspected based on symptoms; however, can only be confirmed at autopsy.[1]

Prevention involves treating newborn jaundice with light therapy, increased milk intake, and sometimes exchange transfusion.[3] Once damage has occurred there is no specific treatment.[1] Measures at this point include symptomatic and supportive care.[5] Complications are often permanent, once they occur.[7] About 15% of newborn deaths in the developing world are the result of kernicterus.[4]

Kernicterus is relatively rare affecting about 0.2 to 2.7 per 100,000 newborns.[7][6] Males are more commonly affected than females.[6] In the United States Black babies are more commonly effected than white.[7] The condition was named in 1904 by Christian Georg Schmorl, though was described earlier in 1875 by Johannes Orth.[2] 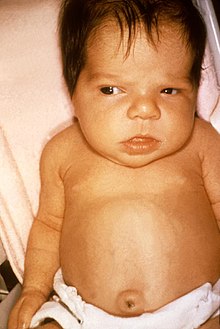 A 6 week old with newborn jaundice

Acute bilirubin encephalopathy (ABE) is an acute state of elevated bilirubin in the central nervous system. Clinically, it encompasses a wide range of symptoms. These include lethargy, decreased feeding, hypotonia or hypertonia, a high-pitched cry, spasmodic torticollis, opisthotonus, setting sun sign, fever, seizures, and even death. If the bilirubin is not rapidly reduced, ABE quickly progresses to chronic bilirubin encephalopathy. Technically it is not a form of kernicterus.

Chronic bilirubin encephalopathy (CBE) is a chronic state of severe bilirubin-induced neurological lesions. Reduction of bilirubin in this state will not reverse the sequelae. Manifestations of CBE include:

Unconjugated hyperbilirubinemia during the neonatal period describes the history of nearly all individuals who suffer from kernicterus. It is thought that the blood–brain barrier is not fully functional in neonates and therefore bilirubin is able to cross the barrier. Moreover, neonates have much higher levels of bilirubin in their blood due to:

Bilirubin is known to accumulate in the gray matter of neurological tissue where it exerts direct neurotoxic effects. It appears that its neurotoxicity is due to mass-destruction of neurons by apoptosis and necrosis.

Gilbert's syndrome and G6PD deficiency occurring together especially increases the risk for kernicterus.[8]

The only effective way at preventing kernicterus is to lower the serum bilirubin levels either by phototherapy or exchange transfusion. Visual inspection is never sufficient; therefore, it is best to use a bilimeter or blood test to determine a baby's risk for developing kernicterus. These numbers can then be plotted on the Bhutani nomogram.[citation needed]

Currently no effective treatment exists for kernicterus. Future therapies may include neuroregeneration. A handful of patients have undergone deep brain stimulation, and experienced some benefit. Drugs such as baclofen, clonazepam, gabapentin, and artane are often used to manage movement disorders associated with kernicterus. Proton pump inhibitors are also used to help with reflux. Cochlear implants and hearing aids have also been known to improve the hearing loss that can come with kernicterus (auditory neuropathy – ANSD).[citation needed]