From WikiProjectMed
Jump to navigation Jump to search
This article is about the diaphysis fracture. For the tuberosity fracture, see Pseudo-Jones fracture.

A Jones fracture is a break between the base and middle part of the fifth metatarsal of the foot.[8] It results in pain near the midportion of the foot on the outside.[2] There may also be bruising and difficulty walking.[3] Onset is generally sudden.[4]

The fracture typically occurs when the toes are pointed and the foot bends inwards.[6][2] This movement may occur when changing direction while the heel is off the ground such in dancing, tennis, or basketball.[9][10] Diagnosis is generally suspected based on symptoms and confirmed with X-rays.[3]

Initial treatment is typically in a cast, without any walking on it, for at least six weeks.[5] If after this period of time healing has not occurred a further six weeks of casting may be recommended.[5] Due to poor blood supply in this area, the break sometimes does not heal and surgery is required.[3] In athletes or if the pieces of bone are separated surgery may be considered sooner.[5][8] The fracture was first described in 1902 by orthopedic surgeon Robert Jones, who sustained the injury while dancing.[11][4]

A person with a Jones fracture may not realize that a fracture has occurred. Diagnosis includes the palpation of an intact peroneus brevis tendon, and demonstration of local tenderness distal to the tuberosity of the fifth metatarsal, and localized over the diaphysis of the proximal metatarsal. Bony crepitus is unusual.

Diagnostic x-rays include anteroposterior, oblique, and lateral views and should be made with the foot in full flexion. 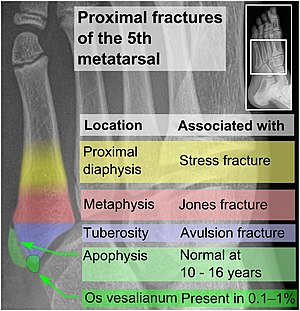 This injury should be differentiated from the developmental "apophysis" which is the secondary ossification center of the metatarsal bone. It is normally occurring at this site in adolescents. Differentiation is possible by characteristics such as absence of sclerosis of the fractured edges (in acute cases) and orientation of the lucent line: transverse (at 90 degrees) to the metatarsal axis for the fracture (due to avulsion pull by the peroneus brevis muscle inserting at the proximal tip) – and parallel to the metatarsal axis in the case of the apophysis.

Initial treatment is typically in a cast, without any weight being placed on it, for at least six weeks.[5] If after this period of time healing has not occurred a further six weeks of casting may be recommended.[5] Up to half, however may not heal after casting.[2]

In athletes or if the pieces of bone are separated by more than 2 mm surgery may be considered.[5][8] Otherwise surgery is recommended if healing does not occur after 12 weeks of casting.[5]

For several reasons, a Jones fracture may not unite. The diaphyseal bone (zone II), where the fracture occurs, is an area of potentially poor blood supply, existing in a watershed area between two blood supplies. This may compromise healing. In addition, there are various tendons, including the peroneus brevis and fibularis tertius, and two small muscles attached to the bone. These may pull the fracture apart and prevent healing.

Zones I and III have been associated with relatively guaranteed union and this union has taken place with only limited restriction of activity combined with early immobilization. On the other hand, zone II has been associated with either delayed or non-union and, consequently, it has been generally agreed that fractures in this area should be considered for some form of internal immobilization, such as internal screw fixation.

These zones can be identified anatomically and on x-ray adding to the clinical usefulness of this classification.[19] Surgical intervention is not, by itself, a guarantee of cure and has its own complication rate. Other reviews of the literature have concluded that conservative, non-operative, treatment is an acceptable option for the non-athlete.[20]