Ixekizumab, sold under the brand name Taltz, is a medication used to treat plaque psoriasis, psoriatic arthritis, and ankylosing spondylitis.[2][3] For plaque psoriasis it is used for moderate to severe disease.[2] It is given as an injection under the skin.[2]

Common side effects include respiratory infections and injection site pain.[2] Other side effects may include infections and allergic reactions.[3] Safety in pregnancy is unclear.[6] It is a monoclonal antibody that attaches to and blocks interleukin 17A, reducing inflammation.[2] 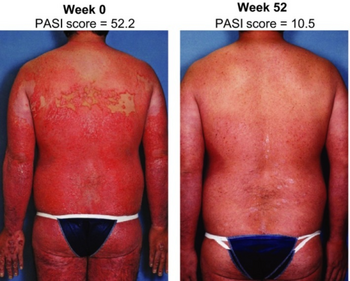 In studies, the drug reduced the Psoriasis Area and Severity Index by at least 75% (PASI75) in 82–89% of patients during the first three months of treatment (depending on the dosing scheme), and 40% of patients experienced a complete absence of psoriasis symptoms (PASI100). In the placebo group, PASI75 was reached in 4% of patients, and PASI100 in none; in the group of patients receiving etanercept, an older anti-psoriasis drug, PASI75 was reached in 48%. Until the 60th study week, 11–44% of ixekizumab treated patients relapsed (again, depending on the dosing scheme), as compared to 84% under placebo.[10][11]

The medication is contraindicated for patients with certain infections such as active tuberculosis.[10]

In studies, ixekizumab increased the rate of infections (27% of ixekizumab treated patients, compared to 23% under placebo), including severe ones (0.6% versus 0.4% under placebo). Other common side effects included injection site pain (13–17% versus 3%), oropharyngeal pain (1%) and nausea (1–2%).[10]

Up to fourfold doses have been given in studies without causing serious side effects.[10]

No interaction studies have been done. Ixekizumab and interleukin 17 are not known to interact with cytochrome P450 (CYP) liver enzymes. Since inflammation suppresses CYP activity, it is theorized that ixekizumab could neutralize this effect and lower blood plasma concentrations of drugs that are metabolized by CYP enzymes, such as warfarin.[10]

Ixekizumab binds to interleukin 17 (IL-17A), a pro-inflammatory cytokine, and blocks its action. Among other things, IL-17A stimulates proliferation and activation of keratinocytes in the skin.[10] This mechanism is similar to that of another anti-psoriasis antibody, brodalumab, which binds to the interleukin-17 receptor.[12]

The antibody has affinity to the homodimer IL-17A and the heterodimer IL-17A/F, but not to other members of the interleukin 17 family.[10]

Like other antibodies, ixekizumab is probably degraded by proteolysis. Its elimination half-life is 13 days.[10]

Ixekizumab is a complete monoclonal antibody of the subclass IgG4, consisting of two light chains and two heavy chains linked by disulfide bridges. Both heavy chains are glycosylated at the asparagine in position 296. In the hinge region, a serine is replaced by a proline to reduce formation of half-antibodies and heterodimers in the manufacturing process. The terminal lysine found in wild-type IgG4 is removed. The antibody is produced in Chinese hamster ovary cells.[13][14]

Ixekizumab was approved by the US Food and Drug Administration (FDA) in March 2016, for the treatment of adults with moderate-to-severe plaque psoriasis[16] and by the European Medicines Agency (EMA) in April 2016.[2] The safety and efficacy of ixekizumab were established in three randomized, placebo-controlled clinical trials with a total of 3,866 participants with plaque psoriasis who were candidates for systemic or phototherapy therapy.[16] The FDA approved ixekizumab based on the evidence from three clinical trials of 1958 participants with moderate to severe psoriasis.[17] The trials were conducted in the USA, Canada, Europe, Russia, Mexico, Chile, Argentina, Japan and Australia.[17]

In December 2017, the FDA approved it for active psoriatic arthritis.[18]