Iron overload, also known as hemochromatosis, is the build up of excessive iron in the body.[1] Symptoms may include tiredness, abdominal pain, darkening skin, and sexual dysfunction.[2] Complications may include cirrhosis, liver failure, liver cancer, heart failure, diabetes, arthritis, and infections.[2][1]

The most common causes are hereditary haemochromatosis (HHC), a genetic disorder, and iron overload from repeated blood transfusions.[2] Rarely it may occur due excessive dietary intake or liver injury during early development (the latter known as neonatal hemochromatosis).[2] Risk factors for more severe disease include other liver diseases and alcoholism.[2] Diagnosis is generally by blood tests, which may be supported by a liver biopsy.[2]

About 1 in 400 white people have HHC and it is the most common autosomal recessive disorder in this group.[1] Onset of symptoms in males is usually after the age of 40 and in females after the age of 50.[2] While males and females are equally likely to carry the mutation, males are 2 to 3 times likely to develop complications.[2][1] Outcomes in HHC are good if the disease is detected early and treated.[1] The symptoms of iron overload were first described by Armand Trousseau in 1865, though it was not until 1889 that von Recklinghausen linked the disease to iron.[3] 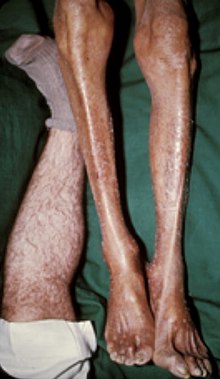 Legs of a 62 year old white person with darkening skin due to iron overload. The leg to the left is a normal individual.[4] 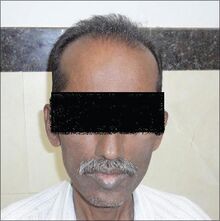 Iron overload in a 48 year old from India[5]

Organs most commonly affected by haemochromatosis include the liver, heart, and endocrine glands.[6]

Iron overload may present with the following syndromes:

The causes can be distinguished between primary cases (hereditary or genetically determined) and less frequent secondary cases (acquired during life).[11]

Most types of hereditary haemochromatosis have autosomal recessive inheritance, while type 4 has autosomal dominant inheritance.[16] 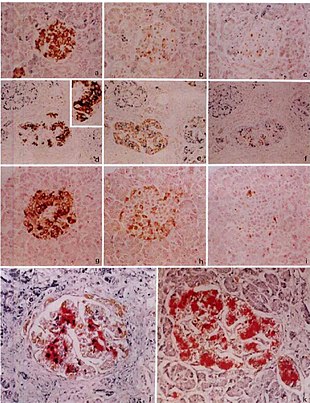 There are several methods available for diagnosing and monitoring iron loading.

Blood tests are usually the first test if there is a clinical suspicion of iron overload. Serum ferritin testing is a low-cost, readily available, and minimally invasive method for assessing body iron stores. However, the major problem with using it as an indicator of iron overload is that it can be elevated in a variety of other medical conditions including infection, inflammation, fever, liver disease, kidney disease, and cancer. Also, total iron binding capacity may be low, but can also be normal.[18] In males and postmenopausal females, normal range of serum ferritin is between 12 and 300 ng/mL (670 pmol/L) .[19][20][21] In premenopausal females, normal range of serum ferritin is between 12 and 150[19] or 200[20] ng/mL (330 or 440 pmol/L).[21] If the person is showing the symptoms, they may need to be tested more than once throughout their lives as a precaution, most commonly in women after menopause.[citation needed] Transferrin saturation is a more specific test.[citation needed]

Liver biopsy is the removal of small sample in order to be studied and can determine the cause of inflammation or cirrhosis. In someone with negative HFE gene testing, elevated iron status for no other obvious reason, and family history of liver disease, additional evaluation of liver iron concentration is indicated. In this case, diagnosis of haemochromatosis is based on biochemical analysis and histologic examination of a liver biopsy. Assessment of the hepatic iron index (HII) is considered the "gold standard" for diagnosis of haemochromatosis.

Magnetic resonance imaging (MRI) is used as a noninvasive way to accurately estimate iron deposition levels in the liver as well as heart, joints, and pituitary gland.

Phlebotomy: routine treatment consists of regularly scheduled phlebotomies (bloodletting or erythrocytapheresis). When first diagnosed, the phlebotomies may be performed every week or fortnight, until iron levels can be brought to within normal range. Once the serum ferritin and transferrin saturation are within the normal range, treatments may be scheduled every two to three months depending upon the rate of reabsorption of iron. A phlebotomy session typically draws between 450 and 500 mL of blood.[24] The blood drawn is sometimes donated.[25]

A diet low in iron is generally recommended, but has little effect compared to venesection. The human diet contains iron in two forms: heme iron and non-heme iron. Heme iron is the most easily absorbed form of iron. People with iron overload may be advised to avoid food that are high in heme iron. Highest in heme iron is red meat such as beef, venison, lamb, buffalo, and fish such as bluefin tuna. A strict low-iron diet is usually not necessary. Non-heme iron is not as easily absorbed in the human system and is found in plant-based foods like grains, beans, vegetables, fruits, nuts, and seeds.[26]

Medication: For those unable to tolerate routine blood draws, there are chelating agents available for use.[27] The drug deferoxamine binds with iron in the bloodstream and enhances its elimination in urine and faeces. Typical treatment for chronic iron overload requires subcutaneous injection over a period of 8–12 hours daily.[citation needed] Two newer iron-chelating drugs that are licensed for use in patients receiving regular blood transfusions to treat thalassaemia (and, thus, who develop iron overload as a result) are deferasirox and deferiprone.[28][29]

A novel experimental approach to the hereditary haemochromatosis treatment is the maintenance therapy with polymeric chelators.[30][31][32] These polymers or particles have a negligible or null systemic biological availability and they are designed to form stable complexes with Fe2+ and Fe3+ in the GIT and thus limiting their uptake and long-term accumulation. Although this method has only a limited efficacy, unlike small-molecular chelators, the approach has virtually no side effects in sub-chronic studies.[32] Interestingly, the simultaneous chelation of Fe2+ and Fe3+ increases the treatment efficacy.[32]

In general, provided there has been no liver damage, patients should expect a normal life expectancy if adequately treated by venesection. If the serum ferritin is greater than 1000 ug/L at diagnosis there is a risk of liver damage and cirrhosis which may eventually shorten their life.[33] The presence of cirrhosis increases the risk of hepatocellular carcinoma.[34]

It is most common in certain European populations (such as the Irish and Norwegians) and occurs in 0.6% of some unspecified population.[23] Men have a 24-fold increased rate of iron-overload disease compared with women.[23]

People of Celtic (Irish, Scottish, Welsh, Cornish, Breton etc.), English, and Scandinavian origin[35] have a particularly high incidence, with about 10% being carriers of the principal genetic variant, the C282Y mutation on the HFE gene, and 1% having the condition.[36] This has been recognised in several alternative names such as Celtic curse, Irish illness, British gene, and Scottish sickness.

Diet and the environment are thought to have had large influence on the mutation of genes related to iron overload. Starting during the Mesolithic era, communities of people lived in an environment that was fairly sunny, warm and had the dry climates of the Middle East. Most humans who lived at that time were foragers and their diets consisted largely of game, fish and wild plants. Archaeologists studying dental plaque have found evidence of tubers, nuts, plantains, grasses and other foods rich in iron. Over many generations, the human body became well-adapted to a high level of iron content in the diet.[37]

In the Neolithic era, significant changes are thought to have occurred in both the environment and diet. Some communities of foragers migrated north, leading to changes in lifestyle and environment, with a decrease in temperatures and a change in the landscape which the foragers then needed to adapt to. As people began to develop and advance their tools, they learned new ways of producing food, and farming also slowly developed. These changes would have led to serious stress on the body and a decrease in the consumption of iron-rich foods. This transition is a key factor in the mutation of genes, especially those that regulated dietary iron absorption. Iron, which makes up 70% of red blood cell composition, is a critical micronutrient for effective thermoregulation in the body.[38] Iron deficiency will lead to a drop in the core temperature. In the chilly and damp environments of Northern Europe, supplementary iron from food was necessary to keep temperatures regulated, however, without sufficient iron intake the human body would have started to store iron at higher rates than normal. In theory, the pressures caused by migrating north would have selected for a gene mutation that promoted greater absorption and storage of iron.[39]

Studies and surveys conducted to determine the frequencies of hemochromatosis help explain how the mutation migrated around the globe. In theory, the disease initially evolved from travelers migrating from the north. Surveys show a particular distribution pattern with large clusters and frequencies of gene mutations along the western European coastline.[40] This led the development of the "Viking Hypothesis".[41] Cluster locations and mapped patterns of this mutation correlate closely to the locations of Viking settlements in Europe established c.700 AD to c.1100 AD. The Vikings originally came from Norway, Sweden and Denmark. Viking ships made their way along the coastline of Europe in search of trade, riches, and land. Genetic studies suggest that the extremely high frequency patterns in some European countries are the result of migrations of Vikings and later Normans, indicating a genetic link between hereditary hemochromatosis and Viking ancestry.[42]

In 1865, Armand Trousseau (a French internist) was one of the first to describe many of the symptoms of a diabetic person with cirrhosis of the liver and bronzed skin color. The term hemochromatosis was first used by German pathologist Friedrich Daniel von Recklinghausen in 1889 when he described an accumulation of iron in body tissues.[43] In 1935 J.H. Sheldon, a British physician, described the link to iron metabolism for the first time as well as demonstrating its hereditary nature.[43]

In 1996 Felder and colleagues identified the hemochromatosis gene, HFE gene. Felder found that the HFE gene has two main mutations, C282Y and H63D, which were the main cause of hereditary hemochromatosis.[44] The next year the CDC and the National Human Genome Research Institute sponsored an examination of hemochromatosis following the discovery of the HFE gene, which helped lead to the population screenings and estimates that are still being used today.[45]

Hereditary haemochromatosis is characterized by an accelerated rate of intestinal iron absorption and progressive iron deposition in various tissues. This typically begins to be expressed in the third to fifth decades of life, but may occur in children. The most common presentation is hepatic (liver) cirrhosis in combination with hypopituitarism, cardiomyopathy, diabetes, arthritis, or hyperpigmentation. Because of the severe sequelae of this disorder if left untreated, and recognizing that treatment is relatively simple, early diagnosis before symptoms or signs appear is important.[22][50]

In general, the term haemosiderosis is used to indicate the pathological effect of iron accumulation in any given organ, which mainly occurs in the form of the iron-storage complex haemosiderin.[51][52] Sometimes, the simpler term siderosis is used instead.

Other definitions distinguishing haemochromatosis or haemosiderosis that are occasionally used include: