Iodine deficiency is a lack of the dietary mineral iodine.[1] It may result in enlargement of the thyroid (goiter), low thyroid, intellectual disability, and congenital iodine deficiency syndrome.[1] During pregnancy it may result in miscarriage or prematurity.[1] Enlargement of the thyroid may take months or years to occur.[1]

Risk factors including living far from the ocean and in mountainous regions, a diet high in certain food such as cassava, and smoking.[2][1] Seafood naturally contains a fair bit of iodine, while other sources may include dairy products, eggs, and chicken.[1] Iodine is required for thyroid hormone production.[2] Diagnosis may be based on urine iodine levels of less than 100 ug/L or less than 150 ug/L in pregnancy.[1][3] In newborns TSH levels may indicate the diagnosis.[1]

Prevention at the population level includes the addition of a small amounts of iodine to table salt.[1] This is mandatory in many countries such as Canada, but voluntary in the USA.[1] Other foods, such as sugar and vegetable oil, have also been fortified in certain locations.[1] Supplementation is available in the form of potassium iodide for either prevention or treatment.[1] Levothyroxine may also be used.[2]

A low amount of thyroxine (one of the two thyroid hormones) in the blood, due to lack of dietary iodine to make it, gives rise to high levels of thyroid stimulating hormone (TSH), which stimulates the thyroid gland to increase many biochemical processes; the cellular growth and proliferation can result in the characteristic swelling or hyperplasia of the thyroid gland, or goiter. In mild iodine deficiency, levels of triiodothyronine (T3) may be elevated in the presence of low levels of levothyroxine, as the body converts more of the levothyroxine to triiodothyronine as a compensation. Some such patients may have a goiter, without an elevated TSH. The introduction of iodized salt since the early 1900s has eliminated this condition in many affluent countries; however, in Australia, New Zealand, and several European countries, iodine deficiency is a significant public health problem.[6] It is more common in developing countries. Public health initiatives to lower the risk of cardiovascular disease have resulted in lower discretionary salt use at the table. Additionally, there is a trend towards consuming more processed foods in western countries.[citation needed] The noniodized salt used in these foods means that people are less likely to obtain iodine from adding salt during cooking.

Congenital iodine deficiency syndrome, previously known as cretinism, is a condition associated with iodine deficiency and goiter, commonly characterised by mental deficiency, deafness, squint, disorders of stance and gait and stunted growth due to hypothyroidism. Paracelsus was the first to point out the relation between goitrous parents and their mentally disabled children.[7]

As a result of restricted diet, isolation, intermarriage, etc., as well as low iodine content in their food, children often had peculiar stunted bodies and retarded mental faculties, a condition later known to be associated with thyroid hormone deficiency. Diderot, in his 1754 Encyclopédie, described these patients as "crétins". In French, the term "crétin des Alpes" also became current, since the condition was observed in remote valleys of the Alps in particular. The word cretin appeared in English in 1779.

While reporting recent progress towards overcoming iodine-deficiency disorders worldwide, The Lancet noted: "According to World Health Organization, in 2007, nearly 2 billion individuals had insufficient iodine intake, a third being of school age." A conclusion was made that the single most preventable cause of intellectual disability is that of iodine deficiency.[8]

There is preliminary evidence that iodine deficiency enhances the sensitivity of breast tissue to estrogen.[9][10] In rats treated with estradiol, iodine deficiency has been shown to lead to changes similar to benign breast changes that are reversible by increased iodine in the diet.[9][10] In a few studies, iodine supplementation had beneficial effects (such as reducing the presence of breast cyst, fibrous tissue plaques and breast pain) in women with fibrocystic breast changes.[9][11]

Protective effects of iodine on breast cancer have been postulated from epidemiologic evidence and described in animal models.[12][13][14] In view of the antiproliferative properties of iodine in breast tissue, molecular iodine supplementation has been suggested as an adjuvant in breast cancer therapy.[14] 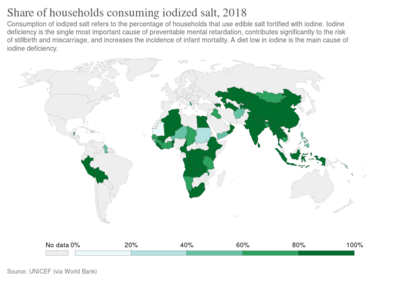 Following is a list of potential risk factors that may lead to iodine deficiency:[15]

Iodine accounts for 65% of the molecular weight of T4 and 59% of T3. There is a total of 15–20 mg of iodine in the human body, primarily concentrated in thyroid tissue and hormones. Thirty percent of iodine is distributed in other tissues, including the mammary glands, eyes, gastric mucosa, choroid plexus, arterial walls, the cervix, and salivary glands. In the cells of these tissues, iodide enters directly by sodium-iodide symporter (NIS).[17][18]

The diagnostic workup of a suspected iodine deficiency includes symptoms as well as risk factors. A 24-hour urine iodine collection is a useful test, as approximately 90% of ingested iodine is excreted in the urine.[19] For the standardized 24-hour test, a 50 mg iodine load is given, and 90% of this load is expected to be recovered in the urine of the following 24 hours. Recovery of less than 90% means high retention, that is, iodine deficiency. The recovery may, however, be well less than 90% during pregnancy, and an intake of goitrogens can alter the test results.[20]

If a 24-hour urine collection is not practical, a random urine iodine-to-creatinine ratio can alternatively be used.[19] However, the 24-hour test is found to be more reliable.[21]

A general idea of whether a deficiency exists can be determined through a functional iodine test in the form of an iodine skin test. In this test, the skin is painted with an iodine solution: if the iodine patch disappears quickly, this is taken as a sign of iodine deficiency. However, no accepted norms exist on the expected time interval for the patch to disappear, and in persons with dark skin color the disappearance of the patch may be difficult to assess. If a urine test is taken shortly after, the results may be altered due to the iodine absorbed previously in a skin test.[20] 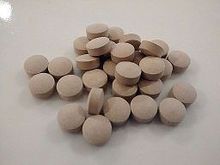 Iodine deficiency is treated by ingestion of iodine salts, such as found in food supplements. Mild cases may be treated by using iodized salt in daily food consumption, or drinking more milk, or eating egg yolks, and saltwater fish. For a salt and/or animal product restricted diet, sea vegetables (kelp, hijiki, dulse, nori (found in sushi)) may be incorporated regularly into a diet as a good source of iodine.[19]

The recommended daily intake of iodine for adult women is 150–300 µg for maintenance of normal thyroid function; for men, it is somewhat less at 150 µg.[19]

Nonetheless, there is a lack of evidence on iodine fortification in foods, beverages, condiments, or seasonings other than salt in preventing goiter or improving physical development. On the other hand, such a measure may increase iodine concentration in urine.[22]

However, too high iodine intake, for example due to overdosage of iodine supplements, can have toxic side effects. It can lead to hyperthyroidism and consequently high blood levels of thyroid hormones (hyperthyroxinemia). In case of extremely high single-dose iodine intake, typically a short-term suppression of thyroid function (Wolff–Chaikoff effect) occurs.[23] Persons with pre-existing thyroid disease, elderly persons, fetuses and neonates, and patients with other risk factors are at a higher risk of experiencing iodine-induced thyroid abnormalities.[24] In particular, in persons with goiter due to iodine deficiency or with altered thyroid function, a form of hyperthyroidism called Jod-Basedow phenomenon can be triggered even at small or single iodine dosages, for example as a side effect of administration of iodine-containing contrast agents. In some cases, excessive iodine contributes to a risk of autoimmune thyroid diseases (Hashimoto's thyroiditis[25] and Graves' disease[26]).

With iodine supplementation, goiters caused by iodine deficiency decrease in size in very young children and pregnant women. Generally, however, long-standing goiters caused by iodine deficiency respond with only small amounts of shrinkage after iodine supplementation, and patients are at risk for developing hyperthyroidism.[19]

Being pregnant while iodine-deficient additionally carries the risk of causing congenital iodine deficiency syndrome in the newborn. This disease can only be managed by lifelong administration of thyroxine (T4).[27]

Iodine deficiency resulting in goiter occurs in 187 million people globally as of 2010[update] (2.7% of the population).[4] Certain areas of the world, due to natural deficiency and unavailability of iodine, are severely affected by iodine deficiency, which affects approximately two billion people worldwide. It is particularly common in the Western Pacific, South-East Asia and Africa. Among other nations affected by iodine deficiency, China and Kazakhstan have begun taking action, while Russia has not. Successful campaigns for the adoption of the use of iodized salt require education of salt producers and sellers and a communication campaign directed at the public. The cost of adding iodine to salt is negligible—"Only a few cents a ton."[29]

Iodine deficiency has largely been confined to the developing world for several generations, but reductions in salt consumption and changes in dairy processing practices eliminating the use of iodine-based disinfectants have led to increasing prevalence of the condition in Australia and New Zealand in recent years. A proposal to mandate the use of iodized salt in most commercial breadmaking was adopted in Australia in October 2009.[30] In a study of the United Kingdom published in 2011, almost 70% of test subjects were found to be iodine deficient.[31] The study's authors suggested an investigation regarding "evidence-based recommendations for iodine supplementation".[31]

Micronutrient deficiencies, including iodine deficiency, impair the development of intelligence. Lacking iodine during human development causes a fall, in average, of 12 intelligence quotient (IQ) points in China.[32] A study of U.S. military data collected during the First and Second World Wars found that the introduction of salt iodization in the U.S. in the 1920s resulted in an increase in IQ, by approximately one standard deviation, for the quarter of the U.S. population most deficient in iodine, explaining about "one decade's worth of the upward trend in IQ" in the U.S. (i.e., the Flynn effect).[33] The same study documented "a large increase in thyroid-related deaths following the countrywide adoption of iodized salt, which affected mostly older individuals in localities with high prevalence of iodine deficiency."[33]

In areas where there is little iodine in the diet, typically remote inland areas and semi-arid equatorial climates where no marine foods are eaten, iodine deficiency gives rise to hypothyroidism, symptoms of which are extreme fatigue, goiter, mental slowing, depression, weight gain, and low basal body temperatures.[37]

Iodine deficiency is the leading cause of preventable mental retardation, a result which occurs primarily when babies or small children are rendered hypothyroidic by a lack of the element. The addition of iodine to table salt has largely eliminated this problem in the wealthier nations, but as of March 2006, iodine deficiency remained a serious public health problem in the developing world.[38]

Iodine deficiency is also a problem in certain areas of Europe. In Germany it has been estimated to cause a billion dollars in health care costs per year.[11] A modelling analysis suggests universal iodine supplementation for pregnant women in England may save £199 (2013 UK pounds) to the health service per pregnant woman and save £4476 per pregnant woman in societal costs.[39]

Iodine deficiency was previously a common disease in Norway, because the content of iodine in the drinking water was low. Before 1950 goiter was a widespread disease caused by iodine deficiency.[40] Up to 80 per cent of the population were affected in inland areas. In the coastal communities, saltwater fish were an important part of the diet, and because of the presence of iodine in seawater, goiter was less common than in the inland districts. From the 1950s, Norwegians started adding iodine to dairy cow feed. Since milk was an essential part of the Norwegian diet, the incidence of goiter decreased in the population.[40]