Pruritus (itching) is a common symptom of pregnancy, affecting around 23% of women.[3] The majority of times, itching is a minor annoyance caused by changes to the skin, especially that of the abdomen. However, there are instances when itching may be a symptom of ICP. Although typically noticed on the palms of the hands and the soles of the feet, the itching can occur anywhere on the body.

ICP occurs most commonly in the third trimester, but can begin at any time during the pregnancy.

Most women with this condition present in the third trimester (although it can present as early as seven weeks) with itching without a rash. Typically, the itching is localized to the palms of the hands and soles of the feet, but can be anywhere on the body.

Hallmarks of ICP include the following symptoms:[citation needed]

Not all ICP sufferers have all of the above symptoms.

Maternal consequences include the following:

In most cases induction is typically recommended anywhere from 34–39 weeks.[5][6][7][8][9][10] In the United States, some researchers have suggested that the risk of stillbirth is lower if induction occurs at 36 weeks. Whilst Ovadia's research[5] suggests differently, it is important to note that in the United States bile acid tests can take up to seven days to be processed, and this means that it may be more prudent to base delivery on the US research.[11] 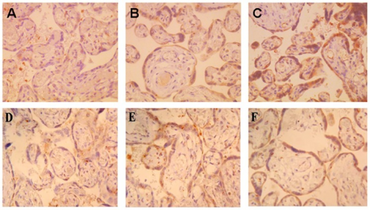 a-f) PPARγ/NF-κB signaling pathway in the pathogenesis of intrahepatic cholestasis of pregnancy (a,d-control)

The causes of intrahepatic cholestasis of pregnancy are still not fully understood, but are thought to be caused through a combination of genetics,[12][13] hormones and environment.[14] Hormones, environmental and genetic factors are all thought to contribute to the condition.[15]

Estrogens, and particularly glucuronides such as estradiol-17β-D-glucuronide, have been shown to cause cholestasis in animal studies, by reducing bile acid uptake by hepatocytes.[17]

Treatment with progesterone in the third trimester of pregnancy has been shown to be associated with the development of ICP, and levels of metabolites of progesterone, particularly sulfated progesterone,[18] are higher in patients with ICP than unaffected women, suggesting that progesterone may have a bigger role than estrogen in ICP.[19]

Clustering of cases of ICP in families, geographic variation in rates of ICP, and recurrence of ICP in 45-70% of subsequent pregnancies all suggest a genetic component to the disease.[15] Genetic mutations in the hepatocellular transport protein ABCB4 (MDR3), which controls secretion of phosphatidylcholine into bile, have been found in cases of ICP.[20]

Genetic mutations affecting hepatic bile salt transport molecules have also been found in patients with progressive familial intrahepatic cholestasis. It has been found that mothers of patients with this disease have a higher incidence of ICP, suggesting that heterozygote carriers of these mutations are also predisposed to ICP.[15]

Consequently, both genetic mutations in hepatocyte proteins involved in bile secretion together with inhibition of those proteins by high levels of hormone metabolites in pregnancy may have roles in the pathogenesis of ICP.[14]

A number of features of ICP suggest that environmental factors also have a role in the disease:

ICP is diagnosed by blood tests including a serum bile acid test and liver function test. While most pregnant women experience some itch from time to time, itching without a visible rash, or persistent or extensive itch symptoms should be reported to the midwife or obstetrician. It is important to note that as the level of itch does not correlate with bile acid levels (shown to be the most likely cause of stillbirth in ICP), the itch in ICP can range from being mild to severe.[citation needed]

To obtain a diagnosis of ICP, a liver function test and a serum bile acid test should be requested. Although the ALT level may be raised, 20% of women with ICP will always have a normal LFT test result.[26] This, plus pruritus of palms and soles, could be considered as potentially diagnostic of ICP but only with elevated bile acid levels (however LFTs are not always elevated in ICP patients). The serum bile acid blood test for ICP is a quantitative measurement of bile acids.

Other problems with the liver that occur in pregnancy should be considered by the treating clinician. These include preeclampsia, the HELLP syndrome, and acute fatty liver of pregnancy. Furthermore, other causes of hepatitis, like hepatitis viruses, cancer and certain medications, should also be considered.

Many providers will prescribe ursodeoxycholic acid. The most recent trial, PITCHES,[27] did not show an overall beneficial effect, but some researchers believe that it may still be useful to offer ursodeoxycholic acid to women whose bile acids are > 40 μmol/litre. While there is no cure for ICP, and no way to guarantee a successful outcome, studies have shown a slightly better fetal and maternal outcome from administration of ursodeoxycholic acid, whereas cholestyramine appears to only relieve itching.[17][28]

There is no evidence that giving oral water-soluble Vitamin K may help to avoid the risk of hemorrhage at delivery. However, experts in ICP will prescribe this if the woman reports pale stools, has very severe ICP (bile acids > 100 μmol/litre) or has a known clotting problem.

Delivery from 34 weeks may be important to reduce the risk of stillbirth, as a recent study identified the level of bile acids at which stillbirth risk rises. This research, published in The Lancet, also suggests that around 90% of women with ICP could wait until 39 weeks of pregnancy to be induced. However, this relies on regular bile acid testing with rapid return of results.[5]