Magnesium deficiency is an electrolyte disturbance in which there is a low level of magnesium in the body. It can result in multiple symptoms.[3] Symptoms include tremor, poor coordination, muscle spasms, loss of appetite, personality changes, and nystagmus.[1][2] Complications may include seizures or cardiac arrest such as from torsade de pointes.[1] Those with low magnesium often have low potassium.[1]

Treatment is with magnesium either by mouth or intravenously.[2] For those with severe symptoms, intravenous magnesium sulfate may be used.[1] Associated low potassium or low calcium should also be treated.[2] The condition is relatively common among people in hospital.[2]

Deficiency of magnesium can cause tiredness, generalized weakness, muscle cramps, abnormal heart rhythms, increased irritability of the nervous system with tremors, paresthesias, palpitations, low potassium levels in the blood, hypoparathyroidism which might result in low calcium levels in the blood, chondrocalcinosis, spasticity and tetany, migraines, epileptic seizures, basal ganglia calcifications and in extreme and prolonged cases coma, intellectual disability or death.[7] Magnesium plays an important role in carbohydrate metabolism and its deficiency may worsen insulin resistance, a condition that often precedes diabetes, or may be a consequence of insulin resistance.[8]

People being treated on an intensive care unit (ICU) who have a low magnesium level may have a higher risk of requiring mechanical ventilation, and death.[9]

Magnesium deficiency is not uncommon in hospitalized patients. Up to 12% of all people admitted to hospital, and as high as 60–65% of people in an intensive care unit, have hypomagnesemia.[11][12]

About 57% of the US population does not meet the US RDA for dietary intake of magnesium.[13] The kidneys are very efficient at maintaining body levels; however, if the diet is deficient, or certain medications such as proton-pump inhibitors are used,[14] or in chronic alcoholism,[15] levels may drop.

Magnesium is a co-factor in over 300 functions in the body regulating many kinds of biochemical reactions.[19] It is involved in protein synthesis, muscle and nerve functioning, bone development, energy production, the maintenance of normal heart rhythm, and the regulation of glucose and blood pressure, among other important roles.[15] Low magnesium intake over time can increase the risk of illnesses, including high blood pressure and heart disease, diabetes mellitus type 2, osteoporosis, and migraines.[15]

There is a direct effect on sodium (Na), potassium (K), and calcium (Ca) channels. Magnesium has several effects:

Potassium channel efflux is inhibited by magnesium. Thus hypomagnesemia results in an increased excretion of potassium in kidney, resulting in a hypokalaemia. This condition is believed to occur secondary to the decreased normal physiologic magnesium inhibition of the ROMK channels in the apical tubular membrane.[22]

In this light, hypomagnesemia is frequently the cause of hypokalaemic patients failing to respond to potassium supplementation. Thus, clinicians should ensure that both Magnesium and Potassium is replaced when deficient. Patients with diabetic ketoacidosis should have their magnesium levels monitored to ensure that the serum loss of potassium, which is driven intracellularly by insulin administration, is not exacerbated by additional urinary losses.[citation needed]

Release of calcium from the sarcoplasmic reticulum is inhibited by magnesium. Thus hypomagnesemia results in an increased intracellular calcium level. This inhibits the release of parathyroid hormone, which can result in hypoparathyroidism and hypocalcemia. Furthermore, it makes skeletal and muscle receptors less sensitive to parathyroid hormone.[23]

Magnesium has an indirect antithrombotic effect upon platelets and endothelial function. Magnesium increases prostaglandins, decreases thromboxane, and decreases angiotensin II, microvascular leakage, and vasospasm through its function similar to calcium channel blockers.[citation needed] Convulsions are the result of cerebral vasospasm. The vasodilatatory effect of magnesium seems to be the major mechanism.

Magnesium is abundant in nature. It can be found in green vegetables, chlorophyll (chloroplasts), cocoa derivatives, nuts, wheat, seafood, and meat. It is absorbed primarily in the duodenum of the small intestine. The rectum and sigmoid colon can absorb magnesium. Forty percent of dietary magnesium is absorbed. Hypomagnesemia stimulates and hypermagnesemia inhibits this absorption.[citation needed]

The majority of serum magnesium is bound to chelators, including proteins and citrate. Roughly 33% is bound to proteins, and 5–10% is not bound.[citation needed] This "free" magnesium is essential in regulating intracellular magnesium. Normal plasma Mg is 1.7–2.3 mg/dl (0.69–0.94 mmol/l).

The kidneys regulate the serum magnesium. About 2400 mg of magnesium passes through the kidneys daily, of which 5% (120 mg) is excreted through urine. The loop of Henle is the major site for magnesium homeostasis, and 60% is reabsorbed.

Magnesium deficiency is not easy to directly measure.[25] Typically the diagnosis is based on finding low blood magnesium levels (hypomagnesemia).[6] Specifically by finding a plasma magnesium concentration of less than 0.6 mmol/l (1.46 mg/dl).[1] Severe disease generally has a level of less than 0.50 mmol/l (1.25 mg/dl).[2]

The electrocardiogram (ECG) change may show a tachycardia with a prolonged QT interval.[27] Other changes may include prolonged PR interval, ST segment depression, flipped T waves, and long QRS duration.[1]

Treatment of hypomagnesemia depends on the degree of deficiency and the clinical effects. Replacement by mouth is appropriate for people with mild symptoms, while intravenous replacement is recommended for people with severe effects.[28]

Intravenous magnesium sulfate (MgSO4) can be given in response to heart arrhythmias to correct for hypokalemia, preventing pre-eclampsia, and has been suggested as having a potential use in asthma.[1]

The condition is relatively common among people in hospital.[2]

Magnesium deficiency in humans was first described in the medical literature in 1934.[33] 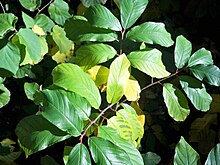 A plant with magnesium deficiency

Magnesium deficiency is a detrimental plant disorder that occurs most often in strongly acidic, light, sandy soils, where magnesium can be easily leached away. Magnesium is an essential macronutrient constituting 0.2-0.4% of plants' dry matter and is necessary for normal plant growth.[34] Excess potassium, generally due to fertilizers, further aggravates the stress from magnesium deficiency,[35] as does aluminium toxicity.[36]

Magnesium has an important role in photosynthesis because it forms the central atom of chlorophyll.[34] Therefore, without sufficient amounts of magnesium, plants begin to degrade the chlorophyll in the old leaves. This causes the main symptom of magnesium deficiency, interveinal chlorosis, or yellowing between leaf veins, which stay green, giving the leaves a marbled appearance. Due to magnesium's mobile nature, the plant will first break down chlorophyll in older leaves and transport the Mg to younger leaves which have greater photosynthetic needs. Therefore, the first sign of magnesium deficiency is the chlorosis of old leaves which progresses to the young leaves as the deficiency progresses.[37] Magnesium also acts as an activator for many critical enzymes, including ribulosebisphosphate carboxylase (RuBisCO) and phosphoenolpyruvate carboxylase (PEPC), both essential enzymes in carbon fixation. Thus low amounts of Mg lead to a decrease in photosynthetic and enzymatic activity within the plants. Magnesium is also crucial in stabilizing ribosome structures, hence, a lack of magnesium causes depolymerization of ribosomes leading to premature aging of the plant.[34] After prolonged magnesium deficiency, necrosis and dropping of older leaves occurs. Plants deficient in magnesium also produce smaller, woodier fruits.

Magnesium deficiency in plants may be confused with zinc or chlorine deficiencies, viruses, or natural aging, since all have similar symptoms. Adding Epsom salts (as a solution of 25 grams per liter or 4 oz per gal) or crushed dolomitic limestone to the soil can rectify magnesium deficiencies. An organic treatment is to apply compost mulch, which can prevent leaching during excessive rainfall and provide plants with sufficient amounts of nutrients, including magnesium.[38]