Hypertensive encephalopathy (HE) is general brain dysfunction due to significantly high blood pressure.[3] Symptoms may include headache, vomiting, trouble with balance, and confusion.[1] Onset is generally sudden.[1] Complications can include seizures, posterior reversible encephalopathy syndrome, and bleeding in the back of the eye.[1][3]

In hypertensive encephalopathy, generally the blood pressure is greater than 200/130 mmHg.[1] Occasionally it can occur at a BP as low as 160/100 mmHg.[4] This can occur in kidney failure, those who rapidly stop blood pressure medication, pheochromocytoma, and people on a monoamine oxidase inhibitor (MAOI) who eat foods with tyramine.[2] When it occurs in pregnancy it is known as eclampsia.[2] The diagnosis requires ruling out other possible causes.[1]

The condition is generally treated with medications to relatively rapidly lower the blood pressure.[2][3] This may be done with labetalol or sodium nitroprusside given by injection into a vein.[2] In those who are pregnant, magnesium sulfate may be used.[2] Other treatments may include anti-seizure medications.[2]

Hypertensive encephalopathy is uncommon.[2] It is believed to occur more often in those without easy access to health care.[2] The term was first used by Oppenheimer and Fishberg in 1928.[5][6] It is classified as a type of hypertensive emergency.[4]

Symptoms of hypertensive encephalopathy typically start to occur 12–48 hours after a sudden and sustained increase in blood pressure. The first manifestation of these symptoms is a severe headache. Headache occurs in greater than 75% of patients.[10] The patient becomes restless. Alterations in consciousness may follow several hours later, which include impaired judgement and memory, confusion, somnolence and stupor. If the condition is not treated, these neurological symptoms may worsen and ultimately turn into a coma. Other symptoms may include increased irritability, vomiting, diplopia, seizures, twitching and myoclonus of the limbs. Alterations in vision (vision blurring, hemivisual field defects, color blindness, cortical blindness) are common. They occur in 4 out of 11 cases (Jellinek et al. 1964). Hemiparesis, intracerebral hemorrhage, aphasia may also occur, but they are less common. 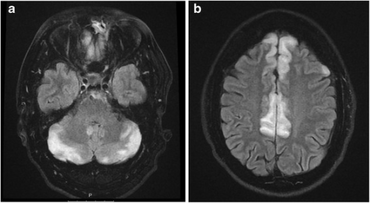 a,b) Increased signal in cortex throughout the frontal and temporal lobes due to Venlafaxine

The initial aim of treatment in hypertensive crises is to rapidly lower the diastolic pressure to about 100 to 105 mmHg; this goal should be achieved within two to six hours, with the maximum initial fall in BP not exceeding 25 percent of the presenting value.[16][17] This level of BP control will allow gradual healing of the necrotizing vascular lesions. More aggressive hypotensive therapy is both unnecessary and may reduce the blood pressure below the autoregulatory range, possibly leading to ischemic events (such as stroke or coronary disease).[18][19]

Once the BP is controlled, the person should be switched to medication by mouth, with the diastolic pressure being gradually reduced to 85 to 90 mmHg over two to three months. The initial reduction to a diastolic pressure of approximately 100 mmHg is often associated with a modest worsening of renal function; this change, however, is typically transient as the vascular disease tends to resolve and renal perfusion improves over one to three months.[20] Antihypertensive therapy should not be withheld in this setting unless there has been an excessive reduction in BP. A change in medication, however, is indicated if the decline in renal function is temporally related to therapy with an angiotensin (ACE) converting enzyme inhibitor or angiotensin II receptor blocker, which can interfere with renal autoregulation and produce acute kidney failure in patients with bilateral renal artery stenosis. (See "Renal effects of ACE inhibitors in hypertension".)

Several parenteral antihypertensive agents are most often used in the initial treatment of malignant hypertension.[16][17]

The major risk with oral agents is ischemic symptoms (e.g., angina pectoris, myocardial infarction, or stroke) due to an excessive and uncontrolled hypotensive response.[23] Thus, their use should generally be avoided in the treatment of hypertensive crises if more controllable drugs are available.

Patients with hypertensive encephalopathy who are promptly treated usually recover without deficit. However, if treatment is not administered, the condition can lead to death.[6]

The first descriptions of the condition date back to the early 1900s. In 1914, Volhard and Fahr distinguished a neurological disorder caused by acute hypertension from a uremic state.[24] He described this condition a "pseudouremia". The term "hypertensive encephalopathy" was introduced by Oppenheimer and Fishberg in 1928 to describe the case of a patient with acute nephritis, severe hypertension and cerebral symptoms.[6]

In the past, the term "hypertensive encephalopathy" has been applied to a range of neurological problems occurring in hypertensive patients, such as headache, dizziness cerebral hemorrhage and transient ischemic attacks. However, currently this term is narrowed down to a clinical condition produced by elevated blood pressure and which can be reversed by blood pressure reduction.[25][26][7]