Hyperprolactinaemia is the presence of high levels of hormone prolactin in the blood.[1] Symptoms in women may include abnormal menstrual periods; while symptoms in men may include erectile dysfunction and breast enlargement.[1] Either sex may be infertility and start producing milk.[1] Complications may include osteoporosis if sex hormone deficiency is present.[1][2]

High prolactin may occur as a result of life events such as pregnancy, nipple stimulation, seizures, sex, or stress.[1] Underlying diseasea that may lead to prolong high pprolactin include prolactinoma, macroprolactinemia, hypothyroidism, acromegaly, Cushing disease, liver cirrhosis, kidney failure, polycystic ovarian syndrome, and radiation therapy of the head.[1] A number of medications including estrogen, antipsychotics, antidepressants, blood pressure medications, and opioids may also result in high levels.[1] Testing is only recommended in those with either symptoms or a pituitary tumor.[2] Normal levels are less than 360 mIU/L (20 ng/ml) in men and 40 to 530 mIU/L in women (2 to 15 ng/ml).[3] During pregnancy normal levels are 1000 to 8000 mIU/L (50 to 400 ng/ml).[3]

Treatment depends on the underlying cause.[1] Prolactinomas are often well treated with cabergoline.[2] Less than 1% of the general population are affected, though it may be present in up to 14% of people who develop amenorrhea.[1] Women are more commonly affected by prolactinomas than men.[1] While the symptoms that result from high prolactin have been described since the time of Hippocrates, the discovery of the link with prolactin occurred in 1930s.[4] 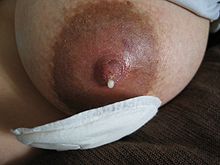 Milk discharge from a nipple

In women, a high blood level of prolactin often causes hypoestrogenism with anovulatory infertility and a decrease in menstruation. In some women, menstruation may disappear altogether (amenorrhoea). In others, menstruation may become irregular or menstrual flow may change. Women who are not pregnant or nursing may begin producing breast milk (galactorrhoea). Some women may experience a loss of libido (interest in sex) and breast pain, especially when prolactin levels begin to rise for the first time, as the hormone promotes tissue changes in the breast. Intercourse may become difficult or painful because of vaginal dryness.

In men, the most common symptoms of hyperprolactinaemia are decreased libido, sexual dysfunction (in both men and women), erectile dysfunction, infertility, and gynecomastia. Because men have no reliable indicator such as menstruation to signal a problem, many men with hyperprolactinaemia being caused by a pituitary adenoma may delay going to the doctor until they have headaches or eye problems caused by the enlarged pituitary pressing against the adjacent optic chiasm. They may not recognize a gradual loss of sexual function or libido. Only after treatment do some men realize they had a problem with sexual function.

Because of hypoestrogenism and hypoandrogenism, hyperprolactinaemia can lead to osteoporosis.

Hyperprolactinaemia may be caused by either disinhibition (e.g., compression of the pituitary stalk or reduced dopamine levels) or excess production from a prolactinoma (a type of pituitary adenoma). A blood serum prolactin level of 1000–5000 mIU/L could be from either mechanism, but >5000 mIU/L (>200 μg/L) is likely due to the activity of an adenoma; macroadenomas (large tumours over 10 mm diameter) have levels of prolactin up to 100,000 mIU/L.

Hyperprolactinemia inhibits the secretion of gonadotropin-releasing hormone (GnRH) from the hypothalamus, which in turn inhibits the release of follicle-stimulating hormone (FSH) and luteinizing hormone (LH) from the pituitary gland and results in diminished gonadal sex hormone production (termed hypogonadism).[6] This is the cause of many of the symptoms described below.

In many people, elevated prolactin levels remain unexplained and may represent a form of hypothalamic–pituitary–adrenal axis dysregulation.

Prolactin secretion in the pituitary is normally suppressed by the brain chemical dopamine. Drugs that block the effects of dopamine at the pituitary or deplete dopamine stores in the brain may cause the pituitary to secrete prolactin. These drugs include the typical antipsychotics: phenothiazines such as chlorpromazine (Thorazine), and butyrophenones such as haloperidol (Haldol); atypical antipsychotics such as risperidone (Risperdal) and paliperidone (Invega);[7][8] gastroprokinetic drugs used to treat gastro-oesophageal reflux and medication-induced nausea (such as that from chemotherapy): metoclopramide (Reglan) and domperidone; less often, alpha-methyldopa and reserpine, used to control hypertension; and also estrogens and TRH.[7][9] The sleep drug ramelteon (Rozerem) also increases the risk of hyperprolactinaemia. A benzodiazepine analog, etizolam, can also increase the risk of hyperprolactinaemia.[medical citation needed] In particular, the dopamine antagonists metoclopramide and domperidone are both powerful prolactin stimulators and have been used to stimulate breast milk secretion for decades. However, since prolactin is antagonized by dopamine and the body depends on the two being in balance, the risk of prolactin stimulation is generally present with all drugs that deplete dopamine, either directly or as a rebound effect.

Prolactinoma or other tumours arising in or near the pituitary — such as those that cause acromegaly may block the flow of dopamine from the brain to the prolactin-secreting cells, likewise, division of the pituitary stalk or hypothalamic disease. Other causes include chronic kidney failure, hypothyroidism, bronchogenic carcinoma and sarcoidosis. Some women with polycystic ovary syndrome may have mildly-elevated prolactin levels.

Testing of prolactin blood levels in women may be useful when there is unexplained milk secretion, irregular menses, or infertility, and in men with impaired sexual function and milk secretion. If prolactin is high, a test of thyroid function, other conditions and medications known to raise prolactin secretion should be queried.

While a plain X-ray of the bones surrounding the pituitary may reveal the presence of a large macro-adenoma, the small micro-adenoma will not be apparent. Magnetic resonance imaging (MRI) is the most sensitive test for detecting pituitary tumours and determining their size. MRI scans may be repeated periodically to assess tumour progression and the effects of therapy. Computed Tomography (CT scan) also gives an image of the pituitary, but it is less sensitive than the MRI.

In addition to assessing the size of the pituitary tumour, doctors also look for damage to surrounding tissues, and perform tests to assess whether production of other pituitary hormones is normal. Depending on the size of the tumour, the visual fields may be affected.

The hormone prolactin is downregulated by dopamine and is upregulated by estrogen. A falsely-high measurement may occur due to the presence of the biologically-inactive macroprolactin in the serum. This can show up as high prolactin in some types of tests, but is asymptomatic.

Treatment is usually medication with dopamine agonists such as cabergoline,[11] bromocriptine (often preferred when pregnancy is possible),[12][13] and less frequently lisuride. A new drug in use is norprolac[14] with the active ingredient quinagolide. Terguride is also used.

Vitex agnus-castus extract can be tried in cases of mild hyperprolactinaemia.[15]

The following eponyms were established before prolactin levels could be measured reliably in the clinical setting. On occasion, they are still encountered: