From WikiProjectMed
Jump to navigation Jump to search
For the disorder of low blood calcium, see Hypocalcaemia.

Hypercalcaemia is a high calcium (Ca2+) level in the blood serum.[1][3] The normal range is 2.1–2.6 mmol/L (8.8–10.7 mg/dL, 4.3–5.2 mEq/L), with levels greater than 2.6 mmol/L defined as hypercalcemia.[1][2][4] Those with a mild increase that has developed slowly typically have no symptoms.[1] In those with greater levels or rapid onset, symptoms may include abdominal pain, bone pain, confusion, depression, weakness, kidney stones or an abnormal heart rhythm including cardiac arrest.[1][2]

Most cases are due to primary hyperparathyroidism or cancer.[1] Other causes include sarcoidosis, tuberculosis, Paget disease, multiple endocrine neoplasia (MEN), vitamin D toxicity, familial hypocalciuric hypercalcaemia and certain medications such as lithium and hydrochlorothiazide.[1][2][3] Diagnosis should generally include either a corrected calcium or ionized calcium level and be confirmed after a week.[1] Specific changes, such as a shortened QT interval and prolonged PR interval, may be seen on an electrocardiogram (ECG).[2]

Treatment may include intravenous fluids, furosemide, calcitonin or pamidronate in addition to treating the underlying cause.[1][2] The evidence for furosemide use, however, is poor.[1] In those with very high levels, hospitalization may be required.[1] Haemodialysis may be used in those who do not respond to other treatments.[1] In those with vitamin D toxicity, steroids may be useful.[1] Hypercalcemia is relatively common.[1] Primary hyperparathyroidism occurs in 1–7 per 1,000 people, and hypercalcaemia occurs in about 2.7% of those with cancer.[1]

The neuromuscular symptoms of hypercalcaemia are caused by a negative bathmotropic effect due to the increased interaction of calcium with sodium channels. Since calcium blocks sodium channels and inhibits depolarization of nerve and muscle fibers, increased calcium raises the threshold for depolarization.[5] This results in diminished deep tendon reflexes (hyporeflexia), and skeletal muscle weakness.[6]

Other symptoms include cardiac arrhythmias (especially in those taking digoxin), fatigue, nausea, vomiting (emesis), loss of appetite, abdominal pain, & paralytic ileus. If kidney impairment occurs as a result, manifestations can include increased urination, urination at night, and increased thirst.[6] Psychiatric manifestation can include emotional instability, confusion, delirium, psychosis, and stupor.[6] Calcium deposits known as limbus sign may be visible in the eyes.[citation needed]

Symptoms are more common at high calcium blood values (12.0 mg/dl or 3 mmol/l).[6] Severe hypercalcaemia (above 15–16 mg/dl or 3.75–4 mmol/l) is considered a medical emergency: at these levels, coma and cardiac arrest can result. The high levels of calcium ions decrease the neuron membrane permeability to sodium ions, thus decreasing excitability, which leads to hypotonicity of smooth and striated muscle. This explains the fatigue, muscle weakness, low tone and sluggish reflexes in muscle groups. The sluggish nerves also explain drowsiness, confusion, hallucinations, stupor or coma. In the gut this causes constipation. Hypocalcaemia causes the opposite by the same mechanism.[citation needed]

A hypercalcaemic crisis is an emergency situation with a severe hypercalcaemia, generally above approximately 14 mg/dL (or 3.5 mmol/l).[7]

The main symptoms of a hypercalcaemic crisis are oliguria or anuria, as well as somnolence or coma.[8] After recognition, primary hyperparathyroidism should be proved or excluded.[8]

In extreme cases of primary hyperparathyroidism, removal of the parathyroid gland after surgical neck exploration is the only way to avoid death.[8] The diagnostic program should be performed within hours, in parallel with measures to lower serum calcium.[8] Treatment of choice for acutely lowering calcium is extensive hydration and calcitonin, as well as bisphosphonates (which have effect on calcium levels after one or two days).[9]

Primary hyperparathyroidism and malignancy account for about 90% of cases of hypercalcaemia.[10][11]

Diagnosis should generally include either a corrected calcium or ionized calcium level and be confirmed after a week.[1] There is, however, controversy around the usefulness of corrected calcium as it may be no better than total calcium.[18]

An Osborn wave, an abnormal EKG tracing that can be associated with hypercalcemia.

Abnormal heart rhythms can also result, and ECG findings of a short QT interval[20] suggest hypercalcaemia. Significant hypercalcaemia can cause ECG changes mimicking an acute myocardial infarction.[21] Hypercalcaemia has also been known to cause an ECG finding mimicking hypothermia, known as an Osborn wave.[22]

The goal of therapy is to treat the hypercalcaemia first and subsequently effort is directed to treat the underlying cause.

Research has led to a better understanding of hypercalcemia in non-human animals. Often the causes of hypercalcemia have a correlation to the environment in which the organisms live. Hypercalcemia in house pets is typically due to disease, but other cases can be due to accidental ingestion of plants or chemicals in the home.[23] Outdoor animals commonly develop hypercalcemia through vitamin D toxicity from wild plants within their environments.[24]

Household pets such as dogs and cats are found to develop hypercalcemia. It is less common in cats, and many feline cases are idiopathic.[23] In dogs, lymphosarcoma, Addison’s disease, primary hyperparathyroidism, and chronic kidney failure are the main causes of hypercalcemia, but there are also environmental causes usually unique to indoor pets.[23] Ingestion of small amounts of calcipotriene found in psoriasis cream can be fatal to a pet.[25] Calcipotriene causes a rapid rise in calcium ion levels.[25] Calcium ion levels can remain high for weeks if untreated and lead to an array of medical issues.[25] There are also cases of hypercalcemia reported due to dogs ingesting rodenticides containing a chemical similar to calcipotriene found in psoriasis cream.[25] Additionally, ingestion of household plants is a cause of hypercalcemia. Plants such as Cestrum diurnum, and Solanum malacoxylon contain ergocalciferol or cholecalciferol which cause the onset of hypercalcemia.[23] Consuming small amounts of these plants can be fatal to pets. Observable symptoms may develop such as polydipsia, polyuria, extreme fatigue, or constipation.[23] 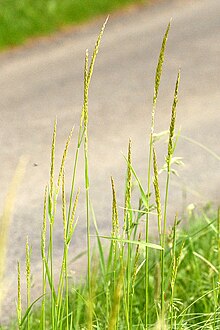 In certain outdoor environments, animals such as horses, pigs, cattle, and sheep experience hypercalcemia commonly. In southern Brazil and Mattewara India, approximately 17 percent of sheep are affected, with 60 percent of these cases being fatal.[24] Many cases are also documented in Argentina, Papua-New Guinea, Jamaica, Hawaii, and Bavaria.[24] These cases of hypercalcemeia are usually caused by ingesting Trisetum flavescens before it has dried out.[24] Once Trisetum flavescens is dried out, the toxicity of it is diminished.[24] Other plants causing hypercalcemia are Cestrum diurnum, Nierembergia veitchii, Solanum esuriale, Solanum torvum, and Solanum malacoxylon.[24] These plants contain calcitriol or similar substances that cause rises in calcium ion levels.[24] Hypercalcemia is most common in grazing lands at altitudes above 1500 meters where growth of plants like Trisetum flavescens is favorable.[24] Even if small amounts are ingested over long periods of time, the prolonged high levels of calcium ions have large negative effects on the animals.[24] The issues these animals experience are muscle weakness, and calcification of blood vessels, heart valves, liver, kidneys, and other soft tissues, which eventually can lead to death.[24]