From WikiProjectMed
(Redirected from Hyoscine hydrobromide)
Jump to navigation Jump to search
For other uses, see Hyoscine (disambiguation).
"Devil's Breath" redirects here. For the novel, see The Devil's Breath.

Hyoscine, also known as scopolamine,[4] is a medication used to treat motion sickness and postoperative nausea and vomiting.[1] It is also sometimes used before surgery to decrease saliva.[1] When used by injection, effects begin after about 20 minutes and last for up to 8 hours.[1] It may also be used by mouth and as a skin patch.[1]

Common side effects include sleepiness, blurred vision, dilated pupils, and dry mouth.[1] It is not recommended in people with angle-closure glaucoma or bowel obstruction.[1] It is unclear if use during pregnancy is safe; however, it appears to be safe during breastfeeding.[5] Hyoscine is in the antimuscarinic family of medications and works by blocking some of the effects of acetylcholine within the nervous system.[1]

Hyoscine was first written about in 1881 and started to be used for anesthesia around 1900.[6][7] It is on the World Health Organization's List of Essential Medicines.[8] Hyoscine is the main active component produced by certain plants of the nightshade family which historically have been used as psychoactive drugs.[9] The name "scopolamine" is derived from one type of nightshade known as Scopolia while the name "hyoscine" is derived from another type known as Hyoscyamus niger.[10][11]

Hyoscine has a number of uses in medicine, where it is used to treat the following:[12][13]

It is sometimes used as a premedication, (especially to reduce respiratory tract secretions) in surgery, mostly commonly by injection.[12][13]

Hyoscine enters breast milk by secretion. Although no human studies exist to document the safety of hyoscine while nursing, the manufacturer recommends that caution be taken if hyoscine is administered to a breastfeeding woman.[17]

The likelihood of experiencing adverse effects from hyoscine is increased in the elderly relative to younger people. This phenomenon is especially true for older people who are also on several other medications. It is recommended that hyoscine use should be avoided in this age group because of these potent anticholinergic adverse effects which have also been linked to an increased risk for dementia.[18][19]

Hyoscine can be taken by mouth, subcutaneously, ophthalmically and intravenously, as well as via a transdermal patch.[20] The transdermal patch (e.g., Transderm Scōp) for prevention of nausea and motion sickness employs hyoscine base, and is effective for up to three days.[21] The oral, ophthalmic, and intravenous forms have shorter half-lives and are usually found in the form hyoscine hydrobromide (for example in Scopace, soluble tablets or Donnatal).

NASA is currently developing a nasal administration method. With a precise dosage, the NASA spray formulation has been shown to work faster and more reliably than the oral form.[22]

Physostigmine is a cholinergic drug that readily crosses the blood-brain barrier, and has been used as an antidote to treat the central nervous system depression symptoms of a hyoscine overdose.[27] Other than this supportive treatment, gastric lavage and induced emesis (vomiting) are usually recommended as treatments for oral overdoses.[26] The symptoms of overdose include:[25][26]

The muscarinic antagonism of scopolamine remains the standard method for inducing cognitive deficits in animals and in healthy volunteers. Thus it used as a relevant preclinical model for pharmacological profiling of new therapeutics. [28] Methyllycaconitine- and scopolamine-induced cognitive dysfunction: differential reversal effect by cognition-enhancing drugs

Hyoscine is among the secondary metabolites of plants from Solanaceae (nightshade) family of plants, such as henbane (Hyoscyamus niger), jimson weed (Datura), angel's trumpets (Brugmansia), and corkwood (Duboisia).[31][10]

A putrescine oxidase that specifically recognizes methylated putrescine catalyzes the deamination of this compound to 4-methylaminobutanal, which then undergoes a spontaneous ring formation to N-methyl-pyrrolium cation. In the next step, the pyrrolium cation condenses with acetoacetic acid yielding hygrine. No enzymatic activity could be demonstrated to catalyze this reaction. Hygrine further rearranges to tropinone.[32] 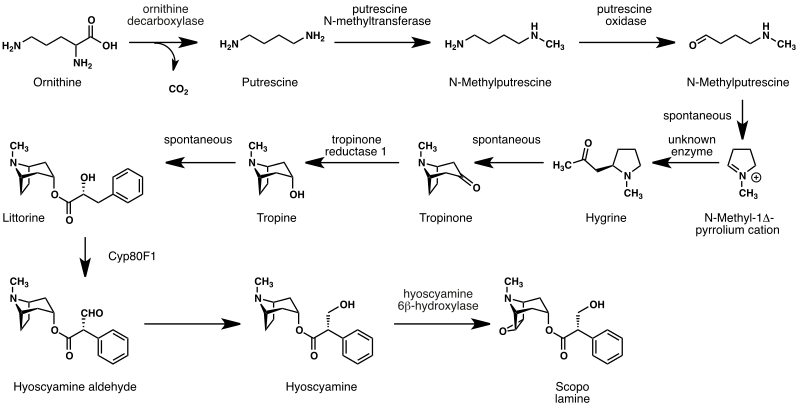 One of the earlier alkaloids isolated from plant sources, hyoscine has been in use in its purified forms (such as various salts, including hydrochloride, hydrobromide, hydroiodide and sulfate), since its isolation by the German scientist Albert Ladenburg in 1880,[34] and as various preparations from its plant-based form since antiquity and perhaps prehistoric times. Following the description of the structure and activity of hyoscine by Ladenburg, the search for synthetic analogues of and methods for total synthesis of hyoscine and/or atropine in the 1930s and 1940s resulted in the discovery of diphenhydramine, an early antihistamine and the prototype of its chemical subclass of these drugs, and pethidine, the first fully synthetic opioid analgesic, known as Dolantin and Demerol amongst many other trade names.

In 1899, a Dr. Schneiderlin recommended the use of hyoscine and morphine for surgical anaesthesia and it started to be used sporadically for that purpose.[6][35] The use of this combination in obstetric anesthesiology was first proposed by Richard von Steinbuchel in 1902 and was picked up and further developed by Carl Gauss in Freiburg, Germany starting in 1903.[36] The method came to be known as "Dämmerschlaf" ("twilight sleep") or the "Freiburg method".[35][36] It spread rather slowly, and different clinics experimented with different dosages and ingredients; in 1915 The Canadian Medical Association Journal reported that "the method [was] really still in a state of development".[35] It remained widely used in the US until the 1960s, when growing chemophobia and a desire for more natural childbirth led to its abandonment.[37]

A bush medicine developed by Aboriginal peoples of the eastern states of Australia from the soft corkwood tree, or Duboisia myoporoides, was used by the Allies in World War II to stop soldiers getting seasick when they sailed across the English Channel on their way to liberate France and defeat Hitler during the Invasion of Normandy. Later, it was found that the same substance could be used in the production of scopolamine and hyoscyamine, which are used in eye surgery, and a multi-million dollar industry was built in Queensland based on this substance.[40]

Recreational and religious use

While it has been occasionally used recreationally for its hallucinogenic properties, the experiences are often unpleasant, mentally and physically. It is also physically dangerous and formally classified as a deliriant drug, so repeated use is rare.[41] In June 2008, more than 20 people were hospitalized with psychosis in Norway after ingesting counterfeit Rohypnol tablets containing hyoscine.[42] In January 2018, 9 individuals were hospitalized in Perth, Western Australia, after reportedly ingesting hyoscine.[43]

Historically, the various plants which produce hyoscine have been used psychoactively for spiritual purposes.[44][45] When entheogenic preparations of these plants were utilized, hyoscine was considered to be the main psychoactive compound and was largely responsible for the hallucinogenic effects, particularly when the preparation was made into a topical ointment (most notably flying ointment).[46] Hyoscine is reported to be the only active alkaloid within these plants that can effectively be absorbed through the skin to cause effects.[47] Different recipes for these ointments were explored in European witchcraft at least as far back as the Early Modern period and included multiple ingredients to help with the transdermal absorption of hyoscine (such as animal fat) as well as other possible ingredients to counteract its noxious and dysphoric effects.[46]

The effects of hyoscine were studied for use as a truth serum in interrogations in the early 20th century,[48] but because of the side effects, investigations were dropped.[49] In 2009, the Czechoslovak state security secret police were proven to have used hyoscine at least three times to obtain confessions from alleged antistate dissidents.[50]

Claims that hyoscine is commonly used in crime have been described as "exaggerated" or even implausible.[51] Powdered hyoscine, in a form referred to as 'Devil's breath', does not 'brainwash' or control people into being defrauded by their attackers; these alleged effects are most likely urban legends.[52] Nevertheless, the drug is known to produce loss of memory following exposure and sleepiness, similar to the effect of benzodiazepines or alcohol poisoning.

A travel advisory published by the United States Department of State in 2012 stated: "One common and particularly dangerous method that criminals use in order to rob a victim is through the use of drugs. The most common [in Colombia] has been hyoscine. Unofficial estimates put the number of annual hyoscine incidents in Colombia at approximately 50,000. Hyoscine can render a victim unconscious for 24 hours or more. In large doses, it can cause respiratory failure and death. It is most often administered in liquid or powder form in foods and beverages. The majority of these incidents occur in night clubs and bars, and usually men, perceived to be wealthy, are targeted by young, attractive women. It is recommended that, to avoid becoming a victim of hyoscine, a person should never accept food or beverages offered by strangers or new acquaintances, nor leave food or beverages unattended in their presence. Victims of hyoscine or other drugs should seek immediate medical attention."[53]

Beside robberies it is also allegedly involved in express kidnappings and sexual assault.[54] The Hospital Clínic in Barcelona introduced a protocol in 2008 to help medical workers identify cases, while Madrid hospitals adopted a similar working document in February 2015.[54] Hospital Clínic has found little scientific evidence to support this use and relies on the victims' stories to reach any conclusion.[54] Although poisoning by hyoscine appears quite often in the media as an aid for raping, kidnapping, killing or robbery, the effects of this drug and the way it is applied by criminals (transdermal injection, on playing cards and papers etc.) are often exaggerated,[55][56][57] especially skin exposure, as the dose that can be absorbed by the skin is too low to have any effect.[54] Hyoscine transdermal patches must be used for hours to days.[20]

The name "burundanga" derives from being an extract of the Brugmansia plant.[58]

Between 1998 and 2004, 13% of emergency room admissions for poisoning with criminal intentions in a clinic of Bogotá, Colombia have been attributed to hyoscine, and 44% to benzodiazepines.[39] Most commonly, the person has been poisoned by a robber who gave the victim a scopolamine-laced beverage, in the hope that the victim would become unconscious or unable to effectively resist the robbery.[39]

Hyoscine is used as a research tool to study memory encoding. Initially, in human trials, relatively low doses of the muscarinic receptor antagonist, scopolamine, were found to induce temporary cognitive defects.[59] Since then, scopolamine has become a standard drug for experimentally inducing cognitive defects in animals.[60][61] Results in primates suggest that acetylcholine is involved in the encoding of new information into long-term memory.[62]

Hyoscine has also been investigated as a rapid-onset antidepressant, with a number of small studies finding positive results.[68][69][70][71]