A hydrocele is a collection of fluid, most commonly around the testicle.[5] It generally presents as painless swelling of the scrotum.[3][2] Usually only one side is affected.[1] Complications may include infection, bleeding, or infertility.[2] In females a hydrocele may form in the labia majora.[4]

The most common cause in children is a failure of the processus vaginalis to close.[2] In adults the most common causes include filariasis, injury, and following hernia surgery.[2] The underlying mechanism involves fluid collecting within the tunica vaginalis.[2] Diagnosis is usually by examination and ultrasound.[3]

Cases in newborns typically resolve on their own in the first year or two of life.[2] In those who develop symptoms, surgery is the primary treatment.[2] While it can be aspirated, the fluid generally simply recollects.[2] In newborns, outcomes are generally excellent; while in adulthood outcomes depend on the underlying cause.[2]

Hydroceles are common globally, particularly in low and middle income countries.[4] Around 2 to 5% of males may be affected in the first year of life.[6] Males are more commonly affected than females.[6] It is believed that the condition is underreported due to modesty.[4] 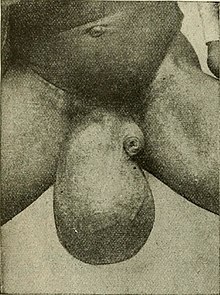 Certain cases of hydrocele in adlts may become very large

A hydrocele feels like a small fluid-filled balloon inside the scrotum. It is smooth, and is mainly in front of the testis. Hydroceles vary greatly in size and are typically painless and harmless. However, as the fluid continues to accumulate and the scrotum further enlarges, more discomfort can be expected. Large hydroceles will cause discomfort because of their size. Sometimes pain can be in both testicles as pressure from the enlarged area puts pressure against the unaffected area which can cause discomfort to the normal testicle. It has also been found to decrease a man's sex drive and makes him less active for fear of enlarging the mass. As the fluid of a hydrocele is transparent, light shone through the hydrocelic region will be visible from the other side. This phenomenon is called transillumination.[citation needed]

Among the complications of hydrocele are:

Complications are often diagnosed post-operatively, which can be differentiated through duplex ultrasound scanning and are bit observed until 24 to 48 hours for early complications such as drainage, infection, formation of haematocele, rupture, etc., but also for 1 to 6 weeks during follow-up on out-patient basis.

A hydrocele can be produced in four ways:

Primary hydroceles may develop in adulthood, particularly in the elderly and in hot countries, by slow accumulation of serous fluid. This is presumably caused by impaired reabsorption. A hydrocele can also result from plugged inguinal lymphatic system caused by chronic infection by Wuchereria bancrofti or Brugia malayi, two mosquito-borne parasites found in Africa and Southeast Asia, respectively.

The swelling is soft and non-tender, large in size on examination, and the testis cannot usually be felt. The presence of fluid is demonstrated by transillumination. These hydroceles can reach a huge size, containing large amount of fluid, as these are painless and are often ignored. They are otherwise asymptomatic, other than size and weight, causing inconvenience. However the long continued presence of large hydroceles causes atrophy of testis due to compression or by obstructing blood supply. In most cases, the hydrocele, when diagnosed early during complete physical examination, are small and the testis can easily be palpated within a lax hydrocele. However Ultrasound imaging is necessary to visualize the testis if the hydrocele sac is dense to reveal the primary abnormality. But these can become large in cases when left unattended. Hydroceles are usually painless, as are testicular tumors.

It does not occur only in infants but it occurs in adults also, a hydrocele is usually an expression of a patent processus vaginalis (PPV). The tunica and the processus vaginalis are distended to the inguinal ring but there is no connection with the peritoneal cavity.[citation needed]

The processus vaginalis is patent and connects with the general peritoneal cavity. The communication is usually too small to allow herniation of intra-abdominal contents. Digital pressure on the hydrocele does not usually empty it, but the hydrocele fluid may drain into the peritoneal cavity when the child is lying down. Ascites or even ascitic tuberculous peritonitis should be considered if the swellings are bilateral.

The accuracy of the diagnosis must be ascertained. Great care must be taken to differentiate a hydrocele from a scrotal hernia or tumor of the testicle. Ultrasound imaging can be very useful in these cases. A hernia usually can be reduced, transmits a cough impulse, and is not translucent. A hydrocele cannot be reduced into the inguinal canal and gives no impulse on coughing unless a hernia is also present. In young children a hydrocele is often associated with a complete congenital type of hernial sac.

This usually occurs as a result of an underlying condition, such as infection (filariasis, tuberculosis of the epididymis, syphilis), injury (trauma, post-herniorrhaphy hydrocele), or cancer.[2] This type of hydrocele tends to be small, with the exception of secondary hydrocele due to filariasis, which can be very large.[2]

A primary hydrocele is described as having the following characteristics:

A common method of diagnosing is by attempting to shine a strong light (transillumination) through the enlarged scrotum. A hydrocele will usually pass light, while a tumor will not (except in the case of a malignancy with reactive hydrocele).

Most hydroceles appearing in the first year of life seldom require treatment as they resolve without treatment.[8] Hydroceles that persist after the first year or occur later in life require treatment only in selected cases, such as patients who are symptomatic with pain or a pressure sensation, or when the scrotal skin integrity is compromised from chronic irritation; the treatment of choice is surgery and the operation is conducted via an open access technique aiming to excise the hydrocele sac.[9][10] Anesthesia is required for the operation and general anesthesia is of choice in children, while spinal anesthesia is usually sufficient in adults. Local infiltration anesthesi] is not satisfactory because it cannot abolish abdominal pain due to traction on the spermatic cord.[11] In long standing cases, hydrocele fluid may be opalescent with cholesterol and may contain crystals of tyrosine.[12]

After aspiration of a primary hydrocele, fluid reaccumulates over the following months and periodic aspiration or operation is needed. For younger patients, operation is usually preferred.[citation needed] Sclerotherapy is an alternative; after aspiration, 6% aqueous phenol (10-20 ml) together with 1% lidocaine for analgesia can be injected, and this often inhibits reaccumulation. These alternative treatments are generally regarded as unsatisfactory treatment because of the high incidence of recurrences and the frequent necessity for repetition of the procedure.[citation needed]