Hip reduction is a number of techniques used to restore a dislocated hip.[1] It should be carried out soon after the diagnosis is confirmed.[1][3] In those who have an associated fracture, surgical reduction may be required.[1] Complications of delay may include avascular necrosis of the hip and sciatic nerve injury.[1]

It is generally carried out under procedural sedation and analgesia (PSA) with the person on their back.[1] The hip and knee are than bent to 90 degrees while an assistant pushes downward on the pelvis.[1] Techniques than include some combination traction-countertraction and internal and external rotation.[1] If this is not sufficient a sheet may be used to pull the upper thigh outwards.[1]

Following the procedure further X-rays or a CT scan should be done to verify reduction and rule out complications.[1][2] Some recommend that an abduction pillow is than be placed between a persons legs.[1] Following this partial weight-bearing with crutches is recommended for 4 to 6 weeks.[2] The first techniques to reduce a hop without surgery were described in 1870.[2]

The person lies on their back and the operator holds the knee flexed at 90 degrees.[2] With an assistant stabilizing the pelvis, the operator applies traction in line with the femur while flexing the hip up to 90 degrees by holding the person’s knee.[2] The technique often requires the person doing it to stand on the bed, which put them at some risk.[3] A modified version can be done by putting the persons dislocated leg over the clinicians shoulder, followed by standing up.[3] 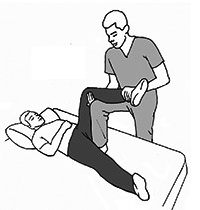 The person is placed on their back with the pelvis held down to the bed.[2] The operator flexes the person’s affected leg over his own thigh, close to the back of the knee.[2] Then, the operator flexes his foot down while applying upward traction with one hand under the persons knee and the other hand holding the ankle controlling rotation, medical, and lateral movements until the hip is reduced.[2]

The person lies on their back with both legs flexed. The operator holds the opposite knee with one hand so that the knee of the affected leg is flexed over his forearm.[2] With the other hand on the ankle of the affected leg they applying downward traction and rotational movement to reduce the hip.[2]

The operator applies longitudinal force in line with the femur, while an assistant uses a sheet wrapped around the upper thigh of the person to apply lateral traction until reduction is achieved.[2] Rotational movement is used as necessary.[2]

Additional measures that may be added to the above techniques include:[1]

Anterior dislocations may be reduced by pulling on the leg and rotating it outwards.[4] An assistant pulling the upper thigh outwards may also be helpful.[4]