Heřmanský–Pudlák syndrome (often written Hermansky–Pudlak syndrome or abbreviated HPS) is an extremely rare autosomal recessive[1] disorder which results in oculocutaneous albinism (decreased pigmentation), bleeding problems due to a platelet abnormality (platelet storage pool defect), and storage of an abnormal fat-protein compound (lysosomal accumulation of ceroid lipofuscin). It is considered to affect around 1 in 500,000 people worldwide, with a significantly higher occurrence in Puerto Ricans, with a prevalence of 1 in 1800.[2] Many of the clinical research studies on the disease have been conducted in Puerto Rico.

There are eight classic forms of the disorder, based on the genetic mutation from which the disorder stems.[3] 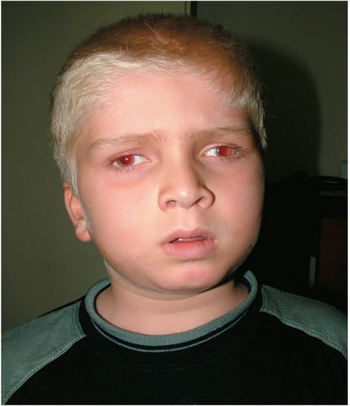 Individual with oculocutaneous albinism and exotropia.

There are three main disorders caused by Hermansky–Pudlak syndrome, which result in these symptoms:

HPS type 2, which includes immunodeficiency in its phenotype, is caused by mutation in the AP3B1 gene.[citation needed]

HPS type 7 may result from a mutation in the gene coding for dysbindin protein.[5]

Hermansky–Pudlak syndrome is thought to be inherited as an autosomal recessive genetic trait. The defective gene, called HSP[dubious – discuss], responsible for this disorder is located on the long arm of chromosome 10 (10q2). Some research suggests that an abnormality of lysosomal function may be responsible for the development of the disease.

In autosomal recessive disorders, the condition does not appear unless a person inherits two copies of the defective gene responsible for the disorder, one copy coming from each parent. If an individual receives one normal gene and one gene for the disorder, the person will be a carrier for the disease, but usually will not show symptoms. The risk of transmitting the disease to the children of a couple, both of whom are carriers for a recessive disorder, is 25 percent. Fifty percent of their children risk being carriers of the disease, but generally will not show symptoms of the disorder. Twenty-five percent of their children may receive both normal genes, one from each parent, and will be genetically normal (for that particular trait). The risk is the same for each pregnancy.[6]

The mechanism of Hermansky–Pudlak syndrome indicates that platelets in affected individuals accumulate abnormally with thrombin, epinephrine, and adenosine diphosphate, furthermore platelets in these individuals have a lower amount of dense bodies[7]

While there is no cure for HPS, treatment for chronic hemorrhages associated with the disorder includes therapy with vitamin E and the antidiuretic dDAVP.[9]

A preoperative pulmonology consultation is needed. The anesthesia team should be aware that patients may have postoperative pulmonary complications as part of the syndrome.[citation needed]

Preoperative hematology consultation is advisable prior to elective ocular surgeries. Since patients with the syndrome have bleeding tendencies, intraoperative, perioperative, and postoperative hemorrhages should be prevented and treated. If platelet aggregation improves with desmopressin, it may be administered in the preoperative period. However, sometimes plasmapheresis is needed in the perioperative period.[citation needed]

The course of HPS has been mild in rare instances of the disorder,[11] however, the general prognosis is still considered to be poor.[citation needed]The disease can cause dysfunctions of the lungs, intestine, kidneys, and heart. The major complication of most forms of the disorder is pulmonary fibrosis, which typically exhibits in patients ages 40–50 years.[12] This is a fatal complication seen in many forms of HPS, and is the usual cause of death from the disorder.[13] HPS patients who develop pulmonary fibrosis typically have type 1 or type 4.[citation needed]

HPS is one of the rare lung diseases currently being studied by The Rare Lung Diseases Consortium (RLDC). The RLDC is part of the Rare Diseases Clinical Research Network (RDCRN), an initiative of the Office of Rare Diseases Research (ORDR), of the National Center for Advancing Translational Sciences (NCATS). The RLDC is dedicated to developing new diagnostics and therapeutics for patients with rare lung diseases, through collaboration between the NIH, patient organizations and clinical investigators.[citation needed]