Goitre is an enlarged of the thyroid gland.[2] This may result in swelling of the front of the neck.[1] In advanced cases a cough, hoarseness, difficulty swallowing, or shortness of breath may occur.[1] It can occur with normal, low, or high thyroid function.[2]

Treatment depends on the underlying cause.[1] This may include watchful waiting, iodine supplements, radioactive iodine, or surgery.[3] Rates of goitre globally are about 16% as of 2004.[4] Females are affected four times more often than males.[2] It is more common in Africa and the Mediterranea region, and less common in the Americas.[4] The condition was first described around 2,700 BC in China.[6] The term is from the Latin guttur, meaning throat.[7]

A goitre can present as a palpable or visible enlargement of the thyroid gland at the base of the neck. A goitre, if associated with hypothyroidism or hyperthyroidism, may be present with symptoms of the underlying disorder. For hyperthyroidism, the most common symptoms are associated with adrenergic stimulation: tachycardia (increased heart rate), palpitations, nervousness, tremor, increased blood pressure and heat intolerance. Clinical manifestations are often related to hypermetabolism, (increased metabolism), excessive thyroid hormone, an increase in oxygen consumption, metabolic changes in protein metabolism, immunologic stimulation of diffuse goitre, and ocular changes (exophthalmos).[8] Hypothyroid people commonly have poor appetite, cold intolerance, constipation, lethargy and may undergo weight gain. However, these symptoms are often non-specific and make diagnosis difficult.[citation needed]

Worldwide, the most common cause for goitre is iodine deficiency, commonly seen in countries that scarcely use iodized salt. Selenium deficiency is also considered a contributing factor. In countries that use iodized salt, Hashimoto's thyroiditis is the most common cause.[9] Goitre can also result from cyanide poisoning; this is particularly common in tropical countries where people eat the cyanide-rich cassava root as the staple food.[10] 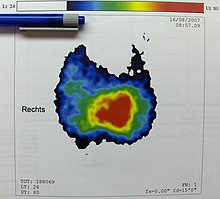 Goitre may be diagnosed via a thyroid function test in an individual suspected of having it.[17]

A goitre may be classified either as nodular or diffuse. Nodular goitres are either of one nodule (uninodular) or of multiple nodules (multinodular).

Goitre is treated according to the cause. If the thyroid gland is producing an excess of thyroid hormones (T3 and T4), radioactive iodine is given to the patient to shrink the gland. If goitre is caused by iodine deficiency, small doses of iodide in the form of Lugol's iodine or KI solution are given. If the goitre is associated with an underactive thyroid, thyroid supplements are used as treatment. Sometimes a partial or complete thyroidectomy is required.[21]

Goitre is more common among women, but this includes the many types of goitre caused by autoimmune problems, and not only those caused by simple lack of iodine.[23] 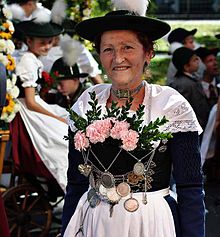 Women in Miesbacher Tracht, including a goitre choker

Chinese physicians of the Tang Dynasty (618–907) were the first to successfully treat patients with goitre by using the iodine-rich thyroid gland of animals such as sheep and pigs—in raw, pill, or powdered form.[24] This was outlined in Zhen Quan's (d. 643 AD) book, as well as several others.[24] One Chinese book, The Pharmacopoeia of the Heavenly Husbandman, asserted that iodine-rich sargassum was used to treat goitre patients by the 1st century BC, but this book was written much later.[24]

In the 12th century, Zayn al-Din al-Jurjani, a Persian physician, provided the first description of Graves' disease after noting the association of goitre and a displacement of the eye known as exophthalmos in his Thesaurus of the Shah of Khwarazm, the major medical dictionary of its time.[25][26] Al-Jurjani also established an association between goitre and palpitation.[27] The disease was later named after Irish doctor Robert James Graves, who described a case of goitre with exophthalmos in 1835. The German Karl Adolph von Basedow also independently reported the same constellation of symptoms in 1840, while earlier reports of the disease were also published by the Italians Giuseppe Flajani and Antonio Giuseppe Testa, in 1802 and 1810 respectively,[28] and by the English physician Caleb Hillier Parry (a friend of Edward Jenner) in the late 18th century.[29]

Paracelsus (1493–1541) was the first person to propose a relationship between goitre and minerals (particularly lead) in drinking water.[30] Iodine was later discovered by Bernard Courtois in 1811 from seaweed ash.

Goitre was previously common in many areas that were deficient in iodine in the soil. For example, in the English Midlands, the condition was known as "Derbyshire neck". In the United States, goitre was found in the Great Lakes, Midwest, and Intermountain regions. The condition is now practically absent in affluent nations, where table salt is supplemented with iodine. However, it is still prevalent in India, China,[31] Central Asia, and Central Africa.

Goitre had been prevalent in the alpine countries for a long time. Switzerland reduced the condition by introducing iodised salt in 1922. The Bavarian tracht in the Miesbach and Salzburg regions, which appeared in the 19th century, includes a choker, dubbed Kropfband (struma band) which was used to hide either the goitre or the remnants of goitre surgery.[32]

In the 1920s wearing bottles of iodine around the neck was believed to prevent goitre.[33]

The coat of arms and crest of Die Kröpfner, of Tyrol showed a man "afflicted with a large goitre", an apparent pun on the German for the word ("Kropf").[37]