From WikiProjectMed
Jump to navigation Jump to search
This article is about deposits in the eye. For the American rock band, see Floater (band). For other uses, see Floater (disambiguation).

Floaters are small dark spots or lines that slowly move across a person's vision.[1] They generally come and go and move with a person's eye.[1] They may become more noticeable when looking at a light colored surface.[1] Other symptoms that occur depend on the underlying cause.[2] Symptoms generally improve within 3 months.[4]

In most causes the cause is shrinkage of the vitreous due to an unknown reason, a posterior vitreous detachment.[2][4] Risk factors include being nearsighted, diabetes, and cataract surgery.[1] Other causes may include eye infection, injury, uveitis, vitreous detachment, or retinal detachment.[1] Diagnosis is by a dilated eye exam.[1]

Treatment depends on the cause; though in many causes nothing specific is required.[1] Occasionally in severe cases a type of surgery known as a vitrectomy may be suggested.[1] Repeated exams may be carried out to rule out a retinal tear or vitreous bleed.[4] Most people are affected at some point in time.[1] They become more common with age.[1]

Floaters are from objects in pockets of liquid within the vitreous humour, the thick fluid or gel that fills the eye,[5] or between the vitreous and the retina. The vitreous humour, or vitreous body, is a jelly-like, transparent substance that fills the majority of the eye. It lies within the vitreous chamber behind the lens, and is one of the four optical components of the eye.[6] Thus, floaters follow the rapid motions of the eye, while drifting slowly within the pocket of liquid. When they are first noticed, the natural reaction is to attempt to look directly at them. However, attempting to shift one's gaze toward them can be difficult because floaters follow the motion of the eye, remaining to the side of the direction of gaze. Floaters are, in fact, visible only because they do not remain perfectly fixed within the eye. Although the blood vessels of the eye also obstruct light, they are invisible under normal circumstances because they are fixed in location relative to the retina, and the brain "tunes out" stabilized images through neural adaptation.[7]

Floaters are particularly noticeable when looking at a blank surface or an open monochromatic space, such as blue sky. Despite the name "floaters", many of these specks have a tendency to sink toward the bottom of the eyeball, in whichever way the eyeball is oriented; the supine position (looking up or lying back) tends to concentrate them near the fovea, which is the center of gaze, while the textureless and evenly lit sky forms an ideal background against which to view them.[5] The brightness of the daytime sky also causes the eyes' pupils to contract, reducing the aperture, which makes floaters less blurry and easier to see.

Floaters present at birth usually remain lifelong, while those that appear later may disappear within weeks or months.[8] They are not uncommon, and do not cause serious problems for most persons; they represent one of the most common presentations to hospital eye services. A survey of optometrists in 2002 suggested that an average of 14 patients per month per optometrist presented with symptoms of floaters in the UK.[9] However, floaters are more than a nuisance and a distraction to those with severe cases, especially if the spots seem constantly to drift through the field of vision. The shapes are shadows projected onto the retina by tiny structures of protein or other cell debris discarded over the years and trapped in the vitreous humour or between the vitreous and retina. Floaters can even be seen when the eyes are closed on especially bright days, when sufficient light penetrates the eyelids to cast the shadows.[citation needed] It is not, however, only elderly persons who are troubled by floaters; they can also become a problem to younger people, especially if they are myopic. They are also common after cataract operations or after trauma.

Floaters are able to catch and refract light in ways that somewhat blur vision temporarily until the floater moves to a different area. Often they trick persons who are troubled by floaters into thinking they see something out of the corner of their eye that really is not there. Most persons come to terms with the problem, after a time, and learn to ignore their floaters. For persons with severe floaters it is nearly impossible to ignore completely the large masses that constantly stay within almost direct view.

There are various causes for the appearance of floaters, of which the most common are described here.

Floaters can occur when eyes age; in rare cases, floaters may be a sign of retinal detachment or a retinal tear.[10] 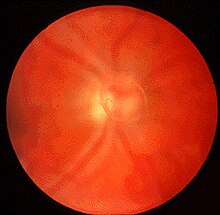 Weiss ring: a large, ring shaped floater that is sometimes seen if the vitreous body releases from the back of the eye

In time, the liquefied vitreous body loses support and its framework contracts. This leads to posterior vitreous detachment, in which the vitreous membrane is released from the sensory retina. During this detachment, the shrinking vitreous can stimulate the retina mechanically, causing the patient to see random flashes across the visual field, sometimes referred to as "flashers", a symptom more formally referred to as photopsia. The ultimate release of the vitreous around the optic nerve head sometimes makes a large floater appear, usually in the shape of a ring ("Weiss ring").[12] As a complication, part of the retina might be torn off by the departing vitreous membrane, in a process known as retinal detachment. This will often leak blood into the vitreous, which is seen by the patient as a sudden appearance of numerous small dots, moving across the whole field of vision. Retinal detachment requires immediate medical attention, as it can easily cause blindness. Consequently, both the appearance of flashes and the sudden onset of numerous small floaters should be rapidly investigated by an eye care provider.[13]

Posterior vitreous detachment is more common in people who:

Regression of the hyaloid artery

The hyaloid artery, an artery running through the vitreous humour during the fetal stage of development, regresses in the third trimester of pregnancy. Its disintegration can sometimes leave cell matter.[15]

People with retinal tears may experience floaters if red blood cells are released from leaky blood vessels, and those with uveitis or vitritis, as in toxoplasmosis, may experience multiple floaters and decreased vision due to the accumulation of white blood cells in the vitreous humour.[16]

Other causes for floaters include cystoid macular edema and asteroid hyalosis. The latter is an anomaly of the vitreous humour, whereby calcium clumps attach themselves to the collagen network. The bodies that are formed in this way move slightly with eye movement, but then return to their fixed position.[citation needed]

Floaters are often readily observed by an ophthalmologist or an optometrist with the use of an ophthalmoscope or slit lamp. However, if the floater is near the retina, it may not be visible to the observer even if it appears large to the patient.

Increasing background illumination or using a pinhole to effectively decrease pupil diameter may allow a person to obtain a better view of his or her own floaters. The head may be tilted in such a way that one of the floaters drifts towards the central axis of the eye. In the sharpened image the fibrous elements are more conspicuous.[17]

The presence of retinal tears with new onset of floaters was surprisingly high (14%; 95% confidence interval, 12–16%) as reported in a meta-analysis published as part of the Rational Clinical Examination Series in the Journal of the American Medical Association.[18] Patients with new onset flashes and/or floaters, especially when associated with visual loss or restriction in the visual field, should seek more urgent ophthalmologic evaluation.

While surgeries do exist to correct for severe cases of floaters, there are no medications (including eye drops) that can correct for this vitreous deterioration. Floaters are often caused by the normal aging process and will usually become less bothersome as a person learns to ignore them. Looking up/down and left/right will cause the floaters to leave the direct field of vision as the vitreous humour swirls around due to the sudden movement.[19] If floaters significantly increase in numbers and/or severely affect vision, then one of the below treatments may be necessary.

As of 2017[update], insufficient evidence is available to compare the safety and efficacy of surgical vitrectomy with laser vitreolysis for the treatment of floaters. A 2017 Cochrane Review did not find any relevant studies that compared the two treatments.[20]

Vitrectomy may be successful in treating more severe cases.[24][25] The technique usually involves making three openings through the part of the sclera known as the pars plana. Of these small gauge instruments, one is an infusion port to resupply a saline solution and maintain the pressure of the eye, the second is a fiber optic light source, and the third is a vitrector. The vitrector has a reciprocating cutting tip attached to a suction device. This design reduces traction on the retina via the vitreous material. A variant sutureless, self-sealing technique is sometimes used.

Like most invasive surgical procedures, however, vitrectomy carries a risk of complications,[26] including: retinal detachment, anterior vitreous detachment and macular edema – which can threaten vision or worsen existing floaters (in the case of retinal detachment).

Laser vitreolysis is a possible treatment option for the removal of vitreous strands and opacities (floaters). In this procedure an ophthalmic laser (usually a yttrium aluminium garnet (YAG) laser) applies a series of nanosecond pulses of low-energy laser light to evaporate the vitreous opacities and to sever the vitreous strands. When performed with a YAG laser designed specifically for vitreolysis, reported side effects and complications associated with vitreolysis are rare. However, YAG lasers have traditionally been designed for use in the anterior portion of the eye, i.e. posterior capsulotomy and iridotomy treatments. As a result, they often provide a limited view of the vitreous, which can make it difficult to identify the targeted floaters and membranes. They also carry a high risk of damage to surrounding ocular tissue. Accordingly, vitreolysis is not widely practised, being performed by very few specialists. One of them, John Karickhoff, has performed the procedure more than 1,400 times and claims a 90 percent success rate.[27] However, the MedicineNet web site states that "there is no evidence that this [laser treatment] is effective. The use of a laser also poses significant risks to the vision in what is otherwise a healthy eye."[28]

Enzymatic vitreolysis has been trialed to treat vitreomacular adhesion (VMA) and anomalous posterior vitreous detachment. Although the mechanism of action may have an effect on clinically significant floaters, as of March 2015[update] there are no clinical trials being undertaken to determine whether this may be a therapeutic alternative to either conservative management, or vitrectomy.[29]

Dropping low doses of atropine onto the eye dilates the pupil, thus reducing shadow formation on the retina by floaters.[30][31]

A vitreous detachment typically affects patients older than the age of 50 and increases in prevalence by age 80. Individuals who are myopic or nearsighted have an increased risk of vitreous floaters. Additionally, eyes with an inflammatory disease after direct trauma to the globe or have recently undergone eye surgery have an increased chance of developing a vitreous floater. Men and women appear to be affected equally.[11]

They are also called muscae volitantes (Latin for 'flying flies'), or mouches volantes (from the same phrase in French).[32]